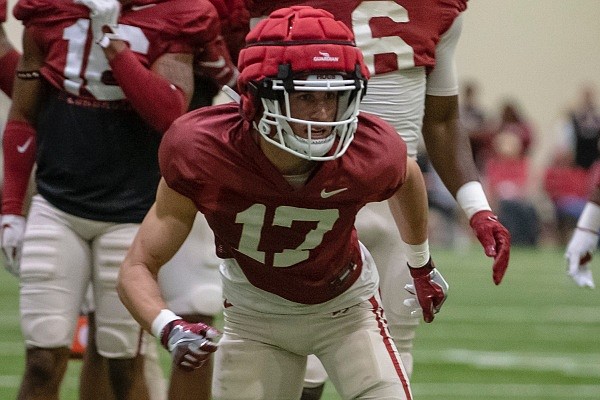 FAYETTEVILLE — On one side of the field at cornerback, a competition is ongoing for a starting nod when Arkansas opens the season at home against Cincinnati on Sept. 3.

Throughout the Razorbacks’ preseason practices, a number of players, including LaDarrius Bishop, Malik Chavis and Dwight McGlothern, have battled to secure playing time. Indications are that it is among Arkansas’ top camp competitions — and most important.

At the opposite cornerback spot, a familiar face and name has held firm as the top option. Hudson Clark, a 6-2 redshirt junior with 11 career starts, is the odds-on favorite for the majority of snaps thanks to a productive first 16 practices.

“Hudson's really played the best of all those guys throughout the first two weeks,” Arkansas coach Sam Pittman said Saturday after the team’s second scrimmage.

Added defensive coordinator Barry Odom last week, "He continues to improve his skillset. His knowledge base is tremendous, and he's become a leader for us."

More from WholeHogSports: Observations from the Razorbacks' football practice on Tuesday

Arkansas safety Jalen Catalon said last weekend that Clark likely has more interceptions (4) than any defensive back this preseason. His ability to play the ball in the air is what made him a national story in 2020 when he turned in a three-pick performance during a 33-21 home victory over Ole Miss.

Clark has also been solid in terms of pass breakups. He recorded one during Arkansas’ "Fastball Start" period Tuesday, breaking up a KJ Jefferson pass intended for receiver Warren Thompson.

“I think Hudson’s making a point to where he wants to work on every little thing that he knows that’s going to make him great,” Catalon said. “It starts when he asks me questions.

Since bursting onto the scene in 2020, he has four pass breakups to his credit, including one in the Outback Bowl win over Penn State on Jan. 1.

First-year cornerbacks coach Dominique Bowman described Clark as an athletic, long and cerebral player. After Day 4 of the preseason, Clark noted he was playing at approximately 183 pounds, up from 176 pounds last season.

“I feel like our strength staff and our nutritionist have done a great job preparing me throughout the summer and spring and put on a couple of pounds,” Clark said. “My strength has definitely gone up this summer, and it’s a big thanks to them.”

As far as plays of the month on the defensive side of the ball, Clark may sit at the top of the list. He made a one-handed interception of Jefferson on Day 1 during a two-minute drill.

“Hudson broke on the ball. It was a great play,” Catalon said. “If I was a quarterback, I would have thought that the route (run by receiver Jadon Haselwood) was open. But he came in, broke on it and made a great play.

“Then he fell down in the two-minute like he was supposed to do. It was a great play.”

Clark recently was on the receiving end of praise from right tackle Dalton Wagner, who said the cornerback has “magnet hands.” Thompson and Toledo transfer receiver Matt Landers dished out compliments of their own Tuesday.

Both described the corner as a patient player, and Landers added he is dependable and has good feet. Clark is said to be much improved in man coverage entering Week 1.

“He doesn't really say much,” safety Jayden Johnson said of Clark. “He just comes out and does what he's got to do, has fun.

"I feel like he'll be a big dude in the game that's going to help us.”