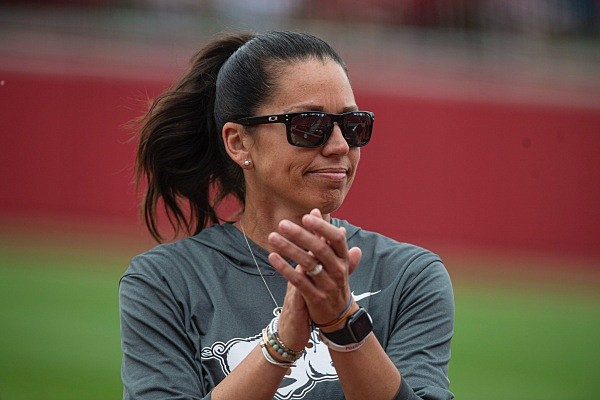 Courtney Deifel, head coach of Arkansas, claps her hands on Saturday, May 28, 2022, before the Texas Longhorns' 3-0 win in Game 3 of the NCAA Softball Super Regional at Bogle Park in Fayetteville. Visit nwaonline.com/220529Daily/ for the photo gallery.

FAYETTEVILLE — University of Arkansas softball coach Courtney Deifel has guided her team to unprecedented success completing her seventh season in Fayetteville and she’s now being rewarded with a new contract.

Deifel inked a five-year extension that runs through June 30, 2027, and includes a series of scheduled salary increases. She could earn up to two one-year agreement extensions based on NCAA Tournament appearances.

Her old five-year contract was for a base pay of $275,000 per year. It also included two $25,000 raises and a pair of one-year extensions for making the NCAA Tournament.

She said this commitment shows the progress the softball program has made in her tenure and it shows the confidence Razorbacks Athletic Director Hunter Yurachek has in it as well.

“I think it’s a huge statement for what Hunter and the University of Arkansas think of our program and how far we’ve come and where our program is in the landscape of college softball,” Deifel said. “I literally get chills talking about it. It’s an honor to get to lead this program and so for them to extend that and believe in me and my staff, it’s a huge compliment and there’s still a lot out ahead of us to accomplish.

“I love that they believe in us that we’re gonna get that done.”

Deifel led the program to its first NCAA Tournament super regional appearances in 2018, 2021 and 2022. Since her first season in 2016, the Razorbacks have been ranked 69 times in the National Fastpitch Coaches’ Association Poll after previously being ranked only once in program history.

Sitting at 238 career victories at Arkansas, Deifel is seven wins away from becoming the program’s winningest head coach.

She has guided the program to back-to-back SEC regular-season championships, one SEC Tournament crown and five NCAA Tournament appearances in six opportunities.

Deifel said the accomplishments are pretty amazing when she takes time to reflect.

“It’s pretty incredible,” Deifel said. “When you’re in it you don’t appreciate it so much because you’re just trying to figure out how to get better every day. And so when you have the time to reflect and you force yourself to because I don’t think there are many coaches that take that time to reflect, when you take that time it’s been an incredible journey and I think we’ve done some amazing things and there’s still some amazing one’s out ahead of us.”

Yurachek praised the work Deifel and her staff have done to bring the Razorbacks softball program to among the country’s elite.

“I think it starts at the top with Coach Deifel and the staff she’s put together and the program and the culture they’ve created and the type of young women that are attracted to this program,” Yurachek said. “And then once they arrive, how they help them develop. And you look back at when she first came here and where our program was and where it is today.

"She has definitely taken it a step each year that she has been here and built a nationally relevant women’s softball program here at the University of Arkansas.”

He said the recent run of success for Razorbacks athletics is tied to the head coaches and Deifel is one of them.

“Her contract is a five-year contract with an opportunity to be seven to keep her here through the 2030 season,” Yurachek said. “And I think that’s very important not only to the success of our softball program, but for the success of our athletic program for her to be a part of that for the foreseeable future.”

CORRECTION: An earlier version had incomplete information on Deifel's retention payments. It has been corrected.