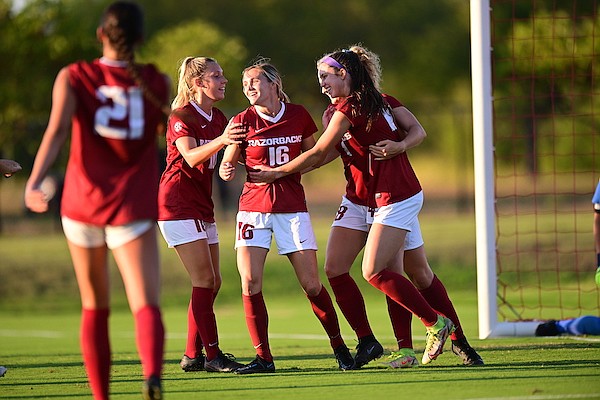 Arkansas players celebrate a goal during a game against Oklahoma on Thursday, Aug. 25, 2022, in Norman, Okla. (Photo by Joshua Gateley, via Arkansas Athletics)

Ava Tankersley led the Razorbacks with three assists, including on goals by Jessica De Filippo in the 10th minute and Makenzie Malham in the 15th minute to give Arkansas an early 2-0 lead. Tankersley added a third assist on Ellie Podojil’s 48th-minute goal that put the Razorbacks ahead 5-0.

Arkansas (1-1) scored twice late in the first half to go ahead 4-0 at halftime. The Razorbacks benefitted from an Oklahoma own goal in the 32nd minute when a ball ricocheted off the back foot of a Sooners defender, and McKenna Saul scored in the 43rd minute.

Chelsea Wagner scored Oklahoma’s only goal in the 55th minute, but Arkansas answered in the 63rd with a left-footed goal by Ainsley Erzen.

“I’m proud of the fight in the players," Arkansas coach Colby Hale said. "It’s been an eventful couple of weeks and the team’s character showed through today. There were certainly some lessons we will take from today as we continue to move forward and grow."

All of Arkansas’ goals were scored against Oklahoma senior goalkeeper Makinzie Short, who was named Big 12 goalkeeper of the week two days earlier. Short had 12 saves on 15 shots against Houston and Nebraska last week, but was 8 for 13 in a little less than 63 minutes against the Razorbacks.

"You have to give credit to the opponent and Arkansas. There's a reason they're where they're at," Oklahoma coach Mark Carr said. "They came in tonight and the goals they scored tonight were punishing.

"They got in front of the goal, and that's things we have to do. We got some chances, had one off the bar, but credit goes to the opponent tonight and it's something we have to learn from."

The Razorbacks defeated the Sooners (0-2-1) for the second time this year. Arkansas won 3-1 in an exhibition game against Oklahoma on April 23 in Fayetteville.

Arkansas returned to competition for the first time since a 1-0 loss at Saint Louis in the season opener last Thursday. That loss dropped the Razorbacks from the United Soccer Coaches poll after Arkansas was ranked eighth to open the season.

The Razorbacks are scheduled to host Arkansas State in a 1 p.m. game Sunday on SEC Network. It will be Arkansas’ first home game after a cancelation last week due to covid-19 issues within DePaul’s program.