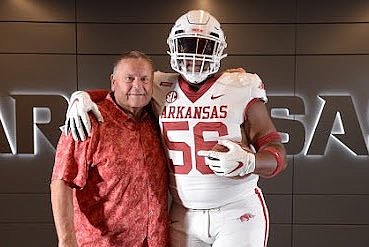 Stephanie Johnson isn’t one to be easily impressed.

She was named the Georgia Department of Education deputy superintendent for school improvement in June 2017 and added chief turnaround officer to her title in 2020.

Stephan Johnson, 6-5, 320 pounds, of Fayetteville (Ga.) Whitewater, made an official visit to Arkansas with his mother and father Gary in June.

Before leaving Fayetteville, he committed to the Hogs over scholarship offers from Maryland, Georgia Tech, Vanderbilt and others.

Stephanie Johnson, her husband and son have met numerous coaches during the recruiting process, but Pittman’s genuineness set him apart from others.

“We have talked to, I don’t know how many coaches along the way and it gets to the point where you can tell the people who are genuine and genuinely concerned about your child and those who aren’t,” she said.

During his official visit, Stephen hung out with several senior Razorbacks at a player’s apartment.

“He said everybody had something positive to say about Coach Pittman,” Stephanie Johnson said. “I said that’s amazing because many head coaches don’t get that from their players.”

After seeing the Arkansas Razorback football twitter account post a video of Pittman welcoming students back for the first day of classes Monday, Stephanie Johnson quoted the tweet, saying she was looking forward to her son being coached by him.

She added, “He has to be the most humble, personable and genuine head coach out there. He makes everyone feel like a best friend.”

“I said, ‘Oh my goodness, this is just the way he is,’ ” she said of the video. “He’s talking to students, he’s talking to the sorority girls. He’s talking to everybody and it makes you feel like you’re sitting on the sofa with him at home, just getting ready to watch your favorite TV show. He really makes everybody feel special.”

When Johnson visited the Hogs, he did so with 10 other highly-recruited committed and uncommitted prospects. Pittman treated everyone the same during the weekend, Stephanie Johnson said.

“You don’t know who’s a 3-star or a 5-star,” she said. “Stephen is a 3-star, but he was literally treated just like the 5-stars and the 4-stars that have committed.”

During her research of Pittman, Johnson came across the video of his teary introductory news conference as Arkansas’ coach and talked to her husband about it.

“I said, ‘Listen. I’ve been dealing with leaders and heads of organizations for the last 14 of my 28 years and something I can tell you about Sam Pittman from everybody else is he’s grateful,’ ” she said.

“He feels like this an opportunity to do well by those kids and the whole state, where some people feel like they’re entitled. I feel like his approach with us and especially with my son … I’m watching like an eagle how people interact with my child.”

Pittman’s wife Jamie has been praised by recruits and parents for her ability to make them feel welcomed.

“She is the nicest, nicest lady,” Stephanie Johnson said. “You can tell she’s a very sweet person.”

Arkansas defensive line coach Deke Adams has coached six players taken in the NFL Draft, including a pair of first-round picks. Stephanie Johnson mentioned Adams’ ability to develop her son on and off the field.

“He is such a wonderful man,” she said. “He’s very similar to Coach Pittman in the way he presents himself and the way he’s prepared to developed Stephen and staying in touch with him and encouraging him to be a man first. How character is so important. I appreciate that.”