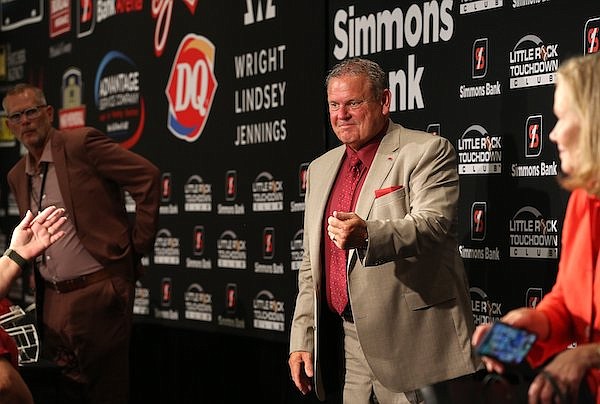 Arkansas head coach Sam Pittman talks to fans after speaking to the Little Rock Touchdown Club on Monday, Aug. 15, 2022, at the DoubleTree Hotel in Little Rock.

These are halcyon days for Razorback Nation. Name a program at the University of Arkansas, chances are it is going great guns.

It is flat out fun to wear Hog gear these days. Fans stick out their chests and brag when given the slightest chance. It’s fun times whether it’s talking about Sam Pittman’s charge to a surprising 9-4 football season, or Elite Eight runs by Eric Musselman’s basketball team.

Pittman talks about the pride of the state and he’s right. It is a “proud damn state” and it is great to be proud of the Razorbacks again.

I rarely wear Razorback gear, but do at times when fishing on a trout stream. I go through ball caps like crazy. My wife tosses them out when they become stinky. And, they do after a handful of fishing trips.

Never mind that they may be the newest lucky cap, they are gone like that big brown trout that saw what you thought was a stealthy step into the stream.

I was wearing a Razorback ball cap this summer on a fishing trip to Pennsylvania. The trip was disguised as a chance for my wife to hit multiple massive antique malls all over Ohio. But she knew there would be two days at Allenberry Resort at Boiling Springs, Pa., where I disappeared into glorious spring creeks.

I wore a brand new Razorback cap that was given to me to throw out the first pitch at a baseball game at Baum-Walker Stadium last April. I consider it extremely lucky and it may get to hang around a long time, stinky or not.

I was on the second of those fishing days on Yellow Breeches Creek behind the resort nailing trout in a way that made me the envy of all within eye sight. There were others – probably novice in experience level – getting blanked. I handed out my own midges in an attempt to get their lines tight.

That beautiful setting was disrupted late in the morning by three middle aged kayakers. I’m not against kayaking a river, but I prefer bigger waters. This place was hardly big enough for a back cast.

We all had to stop as they floated past. That’s not the worst of it. They wanted to discuss the weather, our fishing luck and everything else. What kind of a tree is that? Are you staying at the resort?

I heard it all well before they slid past my fishing spot. Some of the fly fishers chatted away. Others mumbled something, trying hard not to be ugly.

As they got closer, I realized that I was going to be forced into a chat. One lady was doing most of the talking. Another lady, seemed to add a word or two. The lone man was just paddling. I don’t think it was his idea for the float. Body language can give you away as not particularly happy.

The lead talker decided to break the ice about 50 yards above. This was a gentle float and they were not putting for any effort on the paddles. There was a chance our visit might last 10 minutes. Argh.

“Mr. Fly Fisher, are you from around here?” she said.

“No, I’m on a visit from Arkansas,” I said. “You see, I’m wearing an Arkansas Razorback cap.”

Revealing my home didn’t do a thing for the conversation.

“Oh, do you know that you are in an area that has the world’s greatest fly fishing?” she said. “And, you are doing quite well. We’ve watched you catch six or seven in a short time.”

Another small brown trout took my midge and I ignored them as I fought it to my hand. After releasing the beautiful fish, I gave her a thumbs up. I thought that might do it and they’d be gone.

“You do know that Pennsylvania fly fishing is the best, right?” she said.

I tried to ignore her, but I was gaining some steam on setting her straight and perhaps sending the sort of message to get all three of them busy with their paddles.

Then, it hit me, I had a great response. It was going to be heard by others, too. Sound travels well on the water of a little creek. I turned around to face all three at almost point blank range. I could touch them with the end of my fly rod.

“Lady, I beg to differ on your thoughts of your fly fishing,” I said. “It’s quite good or I would not have traveled across the Midwest to fish here.

“But it’s not the best in the world. If you want that, you fly to Alaska. It puts this to shame.”

I stopped, expecting a response. They just stared at me. Well, the man was staring at the lady who started all of this.

But they were not paddling. I couldn’t make a back cast. I needed them to scoot down the river so the river could become peaceful, even if it was full of just little fish.

“One other thing, your rivers here are not even close to Arkansas, either,” I said. “I came here so my wife could shop for antiques. It was not because of great fly fishing. We have much better fly fishing in Arkansas.”

That got them to paddling, but as they slipped away I decided to go for the jugular.

“You know, not only is our fly fishing better, but our football is better in Arkansas, too,” I said. “Just ask those boys from Penn State about what Arkansas did to them in the Outback Bowl.”

By then, they were a good 50 yards away and stroking those paddles deep into the creek and pulling hard. I’d done it.

My favorite of the three, the gentleman, decided to speak for the first time. This was the first time in 30 minutes that I was glad that sound traveled great on the creek.

Loud and clear, he said, “You know, the guy was right.”

I smiled. I gave him a thumbs up and returned to my mission, trying to catch every brown trout in Yellow Breeches Creek.

Everything is better in Arkansas these days. The great supporters of Razorback Nation can stick out their chests and speak loudly when they talk about their football team anywhere they go, especially on a little creek in Pennsylvania.