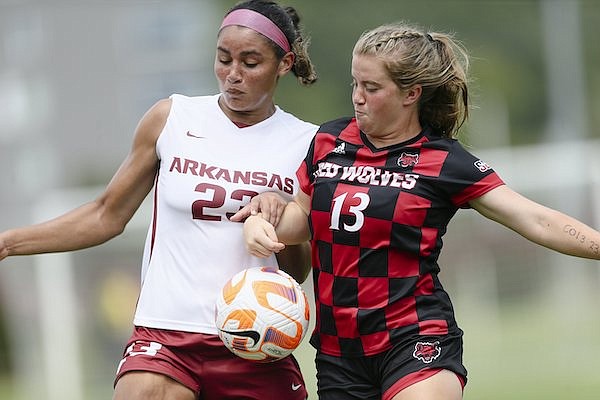 Despite getting the win, Arkansas Coach Colby Hale said he wants to see his team improve.

“We’ll need to watch video and figure out what we did well,” Hale said. “There’s some things we need to clean up and fix. We’ll just do what we do every game and take some confidence from some stuff and try to grow from some others.”

Anna Podojil scored the first goal of the game in the 24th minute, sinking a penalty kick goal into the bottom right of the net to put Arkansas ahead 1-0. Podojil's 38th career goal tied Ruthie Miller for third most in program history.

The Razorbacks went ahead 2-0 right before the half when redshirt junior Shana Flynn, a UCLA transfer, scored her first career goal with a kick into the bottom left of the goal during the 44th minute.

More from WholeHogSports: Photo gallery from the Razorbacks' victory over Arkansas State

At the break, Hale said he wanted to see his team play harder and clean up its corner kicks. After 11 previous unsuccessful attempts, Arkansas got its first corner kick conversion of the match when Ava Tankersley found the top left of the goal with a headshot in the 57th minute. It was her first score of the season and put Arkansas ahead 3-0.

“During our practice this week it was crucial not to interfere with the goalie, but kind of get in her way a little bit,” Tankersley said of the play. “If I pressed too much up on her then they would call a foul, so I just kind of did what I did in practice and just jumped to make it hard for her. And it paid off because it hit my head and went in.”

Arkansas added to its lead, 4-0, in the 68th minute on an own goal by the Red Wolves. Tankersley said she thought both points were a reflection of the team playing harder.

“We scored two goals right off the bat; one was a set-piece goal and then one was a hard running in the box,” she said. “And we got a lucky deflection into the net. I definitely think we picked it up in the second half.”

The Red Wolves (1-2-1) avoided a shutout when Sydoney Clark scored a goal in the 89th minute.

An announced crowd of 1,578 was at Razorback Field. Arkansas played its home opener one week later than originally scheduled. DePaul was unable to play in Fayetteville last Sunday due to covid-19-related issues.

“It’s just so nice to be home,” Tankersley said. “All the traveling was fun but being back in front of our home crowd and our stadium was super nice and super fun.”

“It’s awesome,” Hale said of playing at home again. “We had two teams cancel that were supposed to play here, so it was great to be back home.”

Defenders Van Fitch and Bryana Hunter, who started Arkansas’ season opener at Saint Louis on Aug. 18, did not play. It was the second consecutive game both missed due to injury.

“I’ll have to talk with the medical staff to see where it is,” Hale said. “But we should be getting Hunter back at some point.”

Arkansas will welcome a pair of teams from Michigan in the next week, hosting Western Michigan on Thursday and Michigan State next Sunday.