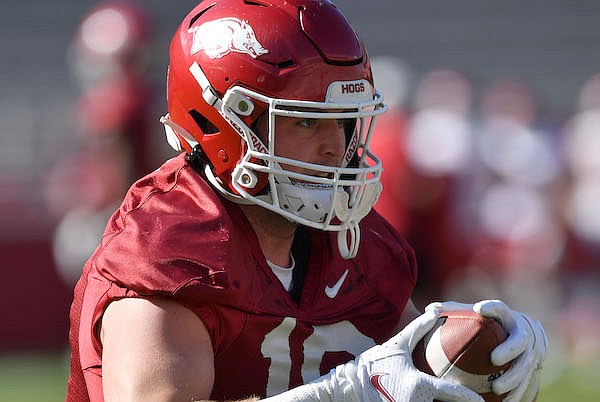 FAYETTEVILLE — Arkansas has selected four players to be team captains for the 2022 season, it was announced Tuesday.

Entering his second year as the Razorbacks’ full-time starter, Jefferson passed for 2,676 yards and rushed for a team-high 664 yards in 2021. He accounted for 27 total touchdowns.

Jefferson is 1 of 2 returning FBS quarterbacks to lead his team in rushing and passing last season.

"His development as a true quarterback, throwing the football, seeing reads, his leadership skills in the locker room, during summer workouts, everything he's done, he's put himself in position to have a great year," Razorbacks offensive coordinator Kendal Briles said Aug. 19. "Incredibly pleased with his work ethic and the way that he's mentored some of the younger guys."

Wagner, a 6-9 redshirt senior, has played in more games (41) than any other Razorback and earned 28 starts. He missed a pair of games last season with an injured finger.

The Spring Grove, Ill., native has also battled a bad back in the past, but said during fall camp it has given him no issues.

Pool, a super senior, led the Razorbacks with 125 tackles last season and is a preseason All-SEC selection. His 349 career tackles rank ninth in program history.

He is 60 tackles shy of surpassing Tony Bua's school record.

"Bump is an excellent leader," linebacker Chris "Pooh" Paul said earlier this month. "There is never a time that I can’t just ask Bump about a scheme or just sit down and watch film and things like that. Bump helped me a lot last year.

"He’s still helping me this year understand more about what the defense is trying to do. Bump has been a great leader in that room."

After missing seven games last season due to shoulder and hand injuries, Catalon has received preseason All-America nods from Sporting News, The Associated Press and Phil Steele. He has 151 tackles, 9 pass breakups and 5 interceptions in his career.