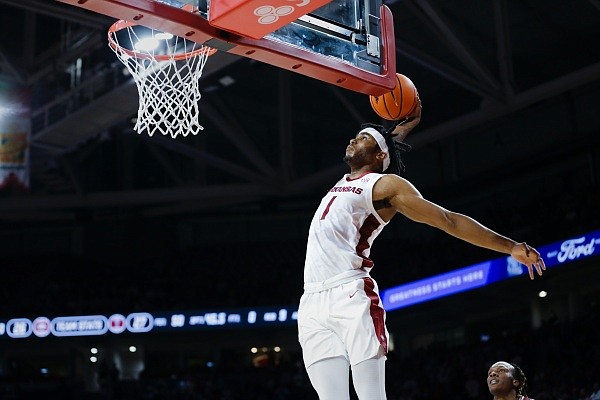 Arkansas guard Ricky Council IV (1) dunks, Monday, November 28, 2022 during the first half of a basketball game at Bud Walton Arena in Fayetteville. Visit nwaonline.com/221129Daily/ for the photo gallery.

FAYETTEVILLE — Arkansas’ men’s basketball team enters the month of December ranked 11th in the country and with a 6-1 record, and the Razorbacks are preparing to face San Jose State on Saturday at 3 p.m. in Bud Walton Arena.

Here are a few takeaways and observations from Arkansas’ play in the first month of the 2022-23 season:

When it was learned star freshman Nick Smith would not begin the season as a figurehead of Arkansas’ core because of right knee management, the on-court conversation centered on which player or players would assume responsibility for making the offense hum.

Council, to this point, with great help from Anthony Black, has been that guy.

It was assumed in the preseason that Smith would be on the ball and initiating offense most often, and Council appeared to be an ideal complementary piece. The thought was he is the type of player who could utilize his athleticism and slashing ability to be a terror off the ball in the half court.

While that has been on display at times, he has also been masterful for stretches as a primary ball handler. It is an ultra-intriguing development, and one that leads me to believe the ball will remain in his hands in both standard possessions and key moments as Smith settles in in the weeks ahead.

Council has been the Razorbacks’ most consistent offensive weapon.

His lowest point total through seven games is 15 points, and even on Maui when he got off to an 0-of-7 shooting start he found a way to finish with 19 points. It spoke a great deal to his mental fortitude and toughness, and a lack of let-off on the gas.

Council has been at his best thus far attacking the rim. According to CBB Analytics, he is 22 of 27 (81.5%) shooting at the rim and 14 of 28 on other shots in the lane. That at-the-rim field goal percentage is 17.3% higher than the Division-I average.

Black is second on the team with 15 rim scores, followed by Trevon Brazile with 13, Makhi Mitchell 12, Makhel Mitchell 9, Jordan Walsh 8 and Jalen Graham 8.

But Council’s game off the bounce and at the rim is unlocked because of a jump shot – both in the mid-range and beyond the arc – that has become a valuable weapon in general and especially in the Razorbacks’ late-clock open offense. Council is shooting just 31% from three-point range, but he is 10 of 23 on two-point jumpers.

He has shot credibility, opening avenues for dribble-drives on hard close-outs.

CBB Analytics shows Council favors the right elbow area, where he is 7 of 14. He has not taken more than five jumpers from any other region of the floor inside the arc, which includes the left elbow and short corners.

His in-between game was on full display against Creighton. Council knocked down four key mid-range jumpers that kept Arkansas’ offense afloat when the Bluejays attempted to pull away behind their high-powered offense.

In short order, Council has become a fan favorite for his powerful dunks in transition, in-air acrobatics and timely shot-making. But he will be respected by opposing teams in December because he is a three-level scorer and has a terrific motor.

The 6-7 freshman guard averaged six points per game prior to Arkansas’ three-game stretch at the Maui Invitational. Since, he has been a major focal point of the team’s offense.

Black opened play in Hawaii with a season-high 26 points on a hyper-efficient 9-of-11 shooting against Louisville. In the moment, it was impressive given that he completely took over the game – the fourth of his college career.

Then again, it was against a Cardinals team that was winless. Could Black replicate that output or produce similarly against a high-level team that many consider a contender for the Final Four? You bet.

Black put 26 points on Creighton, then finished the event with 15 points against another ranked team in San Diego State. He led the tournament with a 22.3 point-per-game average and blossomed into a star in doing so.

According to ESPN Stats & Info, in the loss to the Bluejays he became the fifth freshman in the last 20 seasons to lead his team in points (26), rebounds (6) and assists (6) in an Associated Press top-10 matchup.

On Monday against Troy, Black added 14 points, giving him an average of 20.3 points in the last four games. And he pitched in 8 rebounds, 3 assists, 2 steals and 1 block vs. the Trojans.

It seems there are moments in each game when Black reminds all watching that he is a freshman, whether in the form of a bad pass or offensive foul. He is still very new to the college game and going through a feeling-out process of sorts.

Black has committed 3 or more turnovers in 5 of 7 games. And 7 of his 22 turnovers this season have come in the opening 5 minutes of games.

Offensively, Black has adjusted well to being defended in a fashion that is brand new to him, which freely gives him perimeter jumpers. So far, he is 8 of 22 (36.4%) from three, and, like Council, is able to keep defenders on their heels because his true strength scoring the ball is off dribble-drives.

And, in part, he is able to get into the teeth of defenses because of a tremendous first couple of steps. Black swiftly catches swing passes on the perimeter while already in something of a downhill motion, and it gives him an advantage over the initial defender and compromises the integrity of the rest of the defense.

In those instances, he can pull up for a jumper, drive to the rim or find an open teammate beyond the arc or at/above the rim. And other times he will jab-step his defender on the catch and create the air space needed to get off a clean look from deep.

On the other end, his anticipation is impressive. It is a big reason why he has a team-high 16 steals and is one of the team’s best help defenders.

Black does a solid job of digging and swiping at the ball on dribble-drives when not the primary defender, generating deflections and turnovers.

According to CBB Analytics, Arkansas’ steal percentage is 7.8% higher (15.7%) when he is on the floor. The Razorbacks’ defensive rating, too, is 85.0 with Black in the lineup.

Arkansas is one of the top defensive teams in the country — 87.4 points allowed per 100 possessions, per KenPom analytics — and a key reason why is its ability to turn opponents over.

KenPom data shows the Razorbacks have a turnover percentage of 26.0, which ranks 15th in the country. Arkansas is No. 17 nationally with a steal rate of 14.0%.

That means the Razorbacks have a non-steal turnover percentage of 12.0%. And opponents have given the ball back to Arkansas in a variety of ways.

After a review of each StatBroadcast feed through seven games, here is a breakdown of the types of turnovers forced:

There is a lot to like here. The lost-ball and bad-pass turnovers are pretty stunning and shine a light on the stinginess of Arkansas’ pressure.

The offensive fouls drawn show a selflessness and willingness to give up the body for the betterment of the team. Traveling violations can be self-inflicted, but several have come as a result of opponents doing too much offensively and working themselves into less-than-desirable positions, like under the rim with multiple shot blockers in the area.

Shot clock violations, five-second inbounding calls and the 10-second violation can be chalked up to effort on the Razorbacks’ part. They are long, athletic and have a real want to defend.

Arkansas forward Makhi Mitchell said Monday that Eric Musselman had been emphasizing the need for more productivity from the team’s bigs.

He understood the assignment, finishing with 14 points, 9 rebounds and 3 blocks in the 13-point win over Troy. It was easily the 6-9 transfer’s best all-around game of the young season, but it was not the first game he had played well in.

Through seven games, the Razorbacks have gotten a solid performance from at least one forward in each outing. But the player in the group who turns in the next big game is a crapshoot.

It could come from Brazile, who is averaging 11.9 points and 6.7 rebounds per game and has a team-high 7 blocks, or maybe Makhi or Makhel Mitchell, who each have a double-digit scoring effort to their credit. Kamani Johnson, the veteran in the frontcourt, is a candidate, as well.

Brazile, who has seen plenty of time as a small-ball 5, has largely either played at an All-SEC level or been a non-factor in games. Arkansas can take its play to another level if he raises his performance floor.

The Mitchells have proven they can score, aggressively go after misses off the rim and protect the rim. The Razorbacks have a defensive rating of 79.2 with Makhi Mitchell on the floor this season, and he is 12 of 16 at the rim.

Makhel Mitchell is 9 of 10 at the rim and holds a block rate of 12.5% in the last five games, per CBB Analytics.

Meanwhile, Johnson has an offensive rebound rate of 13.7%. In the last two games, spanning 51 minutes of action, he has 15 points, 10 rebounds, 3 steals and only 1 turnover.

He had three turnovers in nine minutes in the team’s win over South Dakota State, and Johnson did not play in the first two games on Maui.

Each of the front-court pieces, including Jalen Graham, have had frustrating moments or stretches of play. They have also shown they can produce when called upon, which has to be encouraging for Musselman.

He likes the fact each player gives great effort and practices and plays hard. If that continues, each guy will find his way on the floor and contribute in some fashion.