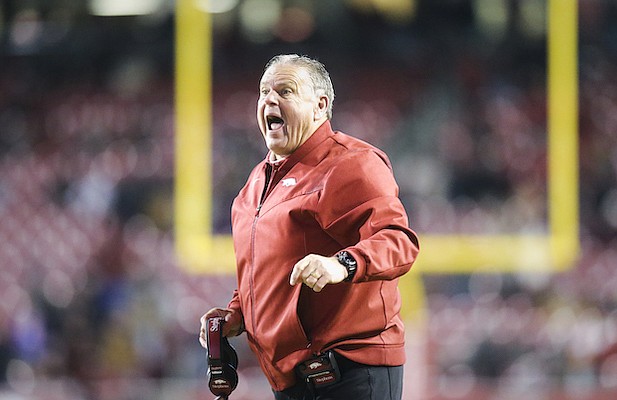 Arkansas coach Sam Pittman is shown during a game against Ole Miss on Saturday, Nov. 19, 2022, in Fayetteville.

With each day, it seems to get worse.

Not just in Arkansas, but across the country, as young men go to social media to declare they are entering the transfer portal or testing the NFL waters.

It seems bad, worse than it actually will be when all is said and done.

For now, it is the talk of the football world and will be until the talk is about who is coming.

Every coach in America is going to try to trade up, including Sam Pittman and his staff.

No one can officially enter the portal until Monday, and the open transfer period is three weeks.

Not all will receive better deals.

Last year, 45% who entered the portal were not offered scholarships, and many ended up stepping down a level or two, which is what they should do if they want to play.

Playing for Home State College is a better than riding the pines at a major university.

The Arkansas Razorbacks are going to be fine when the dust settles, and until then, yes they have enough players to play in a bowl game.

When Razorback backup quarterback Malik Hornsby announced he was going to enter the portal, was there really any surprise? He had already been there once and came back.

It seems pretty apparent that it was his choice not to play receiver. All of fall practice, Pittman said they needed to find ways to get him on the field, and it seems they tried.

There may be some big names like Caleb Williams out there. But the USC quarterback and Heisman Trophy candidate was a rarity. Even then, he just followed his coach from Oklahoma to the West Coast.

The Razorbacks got some help out of the portal last year. Where would their defense have been this season without linebacker Drew Sanders, who led the team in tackles. He transferred from Alabama because they wanted him to play with a hand in the dirt.

It didn’t fit him and Nick Saban told him good luck.

Arkansas’ receiving corps was helped with transfers Matt Landers and Jadon Haselwood, who is one who believes he’s ready for the NFL. There were others who contributed.

The transfer portal is here to stay. It is a big part of recruiting now and not just in football.

It just means a coach has to re-recruit his own players every season.

For now, it seems like gloom and doom for the majority of the football programs because the only talk is who is leaving. That will change when they start announcing who is coming.

This is voter week for postseason college football awards.

From All-America teams to the Heisman and Outland trophies and several others, it has taken yours truly about three hours to cast final votes for various awards.

Maybe ESPN hasn’t decided yet who is going to win the Heisman, and it does usually feature a player this week on its broadcasts, but that seems pretty wide open.

Last year’s winner Bryce Young is a bit of a longshot after Alabama did the unthinkable and lost two games.

Caleb Williams seems to have edged ahead of Ohio State’s C.J. Stroud as the most likely winner. But then the votes aren’t due until Monday, so there is time for Williams, who faces Utah for the Pac-12 championship, to move down.

All 870 voters for the Heisman agree to keep their ballots a secret until the winner is announced, and yours truly will continue to honor that agreement.

However, my ballot is cast before championship weekend because the belief is it should be based on the body of work for an entire season. With that in mind, one of the three on my ballot is not one of the favorites.