What Sam Pittman said during his final radio show of 2022 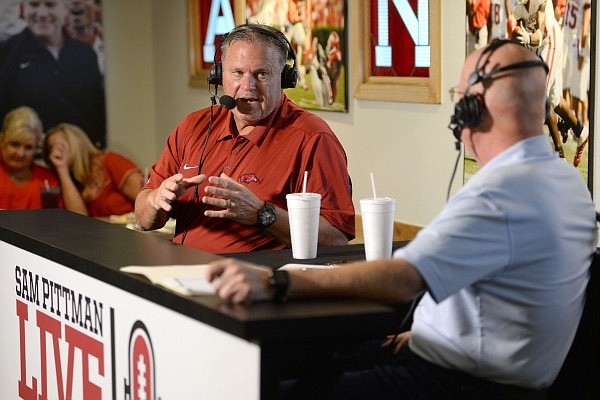 FAYETTEVILLE — Arkansas football coach Sam Pittman took pause from a busy week at the office Wednesday for his final radio show of the year.

The week has been filled with end-of-semester meetings between Pittman and players, which have resulted in a predictably active week for Razorbacks entering the NCAA transfer portal. Pittman also fired his strength and conditioning coach, Jamil Walker, last Saturday and said he has hosted replacement candidates each day this week.

Pittman is also preparing for a weekend with official visitors, and the Razorbacks will learn their bowl destination Sunday afternoon. Coaches' in-home visits with recruits begin Friday.

“You couldn't do this if we were out on the road (recruiting yet),” Pittman said of having so many things happening at once. “Basically, you have to kind of figure out where your roster is and how many scholarships you’re going to have.

Pittman indicated that most of the players who have announced their intent to transfer this week have not been a surprise.

“For the most part, it's right for them,” Pittman said. “They're not playing and they need to go find a school they can play at, and we'll help them.

“It’s a deal right now where the guys that went in (the transfer portal)…they're through with our program, and the guys that are coming back are really excited. I needed to talk to each one and I needed to tell him what I thought, and I need to be a good listener. But the bottom line is: How can we get better? I think it's been a wonderful week to figure that out and the kids will be excited about going to whatever bowl we go to.”

Pittman said the plan is to begin bowl practices Dec. 9 unless the Razorbacks play in the Las Vegas Bowl, which is scheduled for Dec. 17. All other potential bowl games for Arkansas will be played after Christmas.

“I think we've got it worked out to where, depending on what bowl it is, we can probably get 13 practices in and kind of have two spring (practice seasons),” Pittman said. “To me, that's where teams that are going to bowls, that's where they continue to get better because they get 13, 15 practices (compared to) a team that's not going.

A key part to building next year’s team will be through transfers. Pittman said his staff has already offered some transfers from the Football Championship Subdivision, whose transfer portal opened last week. The portal for the higher Football Bowl Subdivision opens next week.

“Sometimes you'll get a hint from somebody — a player or somebody will say, ‘Hey, so and so is going to go into the portal,’” Pittman said. “You obviously can't contact them (yet) or anything of that nature, but you can kind of start thinking, ‘Well, do we want him?’ And it's not to say they're going to come just because we want them, but is this somebody that we're going to put a lot of time and effort into recruiting? Certainly, we have our specific needs, and we've got to address those first if we can.”

Pittman said recruiting never stops, including for the players currently on the roster.

“Kids are a little quicker to leave programs instead of waiting nowadays. It’s a little bit greener somewhere else…and that's just the world we live in. I think we probably all are a little bit like that, you know, and want it right now.”

Pittman said he has learned you can change a program instantly through the transfer portal, but still believes in building a program through high school recruiting.

“The foundation to me has to deal with getting good high school kids and working it through that,” Pittman said. “That's what I believe and hopefully we can win enough games where we can sit here and go, ‘Man, we’ve got fifth-year seniors that are kicking y’all’s butt,’ instead of in and out, in and out every year.”

Pittman indicated the covid-19 limitations on recruiting earlier in his tenure damaged the ability to evaluate high school recruits.

“I don't think you really know them until they're in front of you, you're able to get to their house, you're able to go talk to the coach,” Pittman said. “A lot of things go into getting the right fit for your program.”

Pittman said he can learn a lot about a recruit by the reception to a college coach coming for an in-home visit. He said it is not uncommon for there to be several people at the home to greet the coach.

“It’s so wonderful to see that because you say, ‘Man, this is a popular kid. This must be a really good kid,'" Pittman said. "You can tell a lot about a kid through his parents, and we weren't able to do that (when) we had covid and all that for two years. We weren't able to go to people's homes and understand kids as much. It's hard to understand somebody over Zoom.”