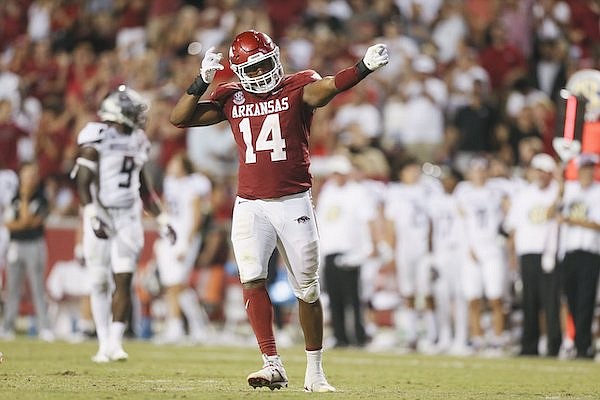 Arkansas defensive end Jordan Domineck celebrates a sack during a game against Missouri State on Saturday, Sept. 17, 2022, in Fayetteville.

FAYETTEVILLE — In the midst of all the transfer portal news this week, the Arkansas Razorbacks got a big lift on Thursday as defensive end Jordan Domineck announced he would come back for his super senior season.

Domineck made his announcement in a social media post in a humorous way, with a short clip from the movie “Terminator” with Arnold Schwarzenegger uttering his classic line, “I’ll be back.” Above that, Domineck wrote “So” followed by a football icon and a Razorback icon.

Domineck has made a big impact in his first season as a transfer from Georgia Tech, as his career-high 61/2 sacks rank second on the team behind Drew Sanders, sixth in the SEC and tied for 56th in the FBS. He also has 71/2 tackles for loss.

Domineck, a 6-3, 251-pounder from Lakeland Fla., and an operations management major, spoke early in the season about what led him to Arkansas in the first place.

“I came out here because the entire vibe of Arkansas as a whole was just amazing,” he said on Sept. 6.

Domineck ranked second on the Arkansas defensive line with 31 tackles, one fewer than Zach Williams, despite not making any starts.

He got off to a great start as a Razorback with a strip-sack and fumble recovery at midfield against Cincinnati with Arkansas hanging on to a seven-point lead in the fourth quarter. Arkansas cashed in the takeaway with a touchdown and held off the Bearcats 31-24.

Domineck’s best game came in a 38-27 win over Missouri State in which he posted 7 tackles and 21/2 sacks. He also forced a key fumble in a 13-10 loss to LSU that could have turned into the play of the game. He knocked the ball away from quarterback Jayden Daniels and teammate Latavious Brini recovered at the LSU 10. The Razorbacks, leading 3-0 at the time, could not score on three plays from inside the LSU 2 in an attempt to take a 10-0 lead.

More news on Razorback personnel movement is expected to come through the week as Arkansas prepares to hear of its bowl selection Sunday.

The other staff members Ed Ellis, Emmanuel Hibbler, Chris Hightower and Nick Tulloch are remaining on staff through Dec. 30, according to the letters of termination they received from Athletic Director Hunter Yurachek.

Wagner, a native of Spring Grove, Ill., has 39 starts over parts of five seasons as a Razorback, including 10 this season as an offensive captain along with quarterback KJ Jefferson.

The 6-9, 331-pounder tagged both Haselwood and Stromberg in a reply to the East-West Shrine game’s Tweet about him accepting an invitation and wrote, “Can’t wait!”

Tailback Raheim Sanders, center Ricky Stromberg, linebacker Drew Sanders and defensive back Hudson Clark were all named to the team, which included 25 players.

Alabama led the league with five selections, while Arkansas was second with four, followed by Georgia and Tennessee with three each.

Raheim Sanders is second in the SEC and 10th nationally with 1,426 rushing yards.

Stromberg, a 44-game starter at Arkansas who has declared for the NFL Draft, was a Pro Football Focus honorable mention All-American earlier in the week.

Drew Sanders leads the team with 103 tackles and 131/2 tackles for loss, and he’s second in the SEC and ninth nationally with 91/2 sacks. He also posted 6 quarterback hurries, 5 pass breakups, 3 forced fumbles, 1 fumble recovery and his first career interception. He is not expected to participate in the Razorbacks’ upcoming bowl game.

Clark split time between cornerback and safety this season and racked up 63 tackles, fourth on the team, to go with 11 pass breakups, 2 forced fumbles, 2 fumble recoveries, 4 tackles for loss and an interception.