Kamani steps up when name is called 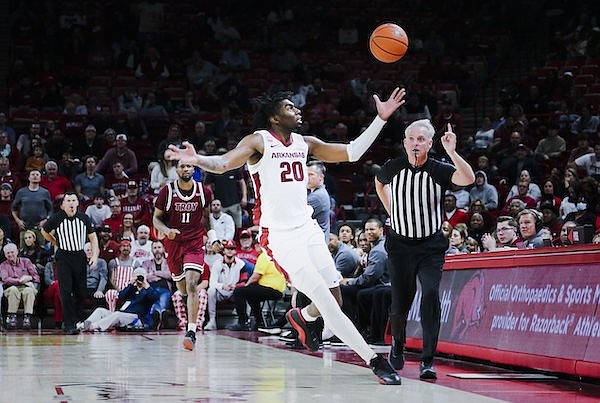 Arkansas forward Kamani Johnson (20) chases a loose ball during a game against Troy on Monday, Nov. 28, 2022, in Fayetteville.

FAYETTEVILLE — University of Arkansas forward Kamani Johnson has played twice as many minutes in the past three halves and an overtime period as he did in the first five games this season.

Johnson, a 6-7 fifth-year senior, played 32 minutes off the bench in the No. 11 Razorbacks’ 74-61 victory over Troy on Monday night and had 8 points, 3 rebounds and 1 steal without a turnover.

“Two weeks ago did anybody think Kamani was going to play 32 minutes?” Arkansas Coach Eric Musselman said. “No, not even me.

“But he’s doing a good job. So when you play hard, you play minutes.”

After not playing in the tournament’s first two games or in the first half against the Aztecs, Johnson played 19 minutes in the second half and overtime, finishing with 7 points, 7 rebounds and 2 steals.

Johnson sent the game to overtime when he scored on a tip-in basket — after Anthony Black missed on a driving attempt — as time expired in regulation to tie the game 67-67.

“It was a game-saving play,” said Black, a freshman guard. “He hadn’t really played a lot the whole tournament, but he kept a good mindset and came in and made a huge play.”

Of Johnson’s 421 career rebounds, including his first two seasons playing for the University of Arkansas-Little Rock, 187 have been offensive. This season he has eight offensive rebounds among his total of 15.

“Coach told me I’m one of the best offensive rebounders in the nation,” Johnson said on the Razorback Sports Network radio show after the San Diego State game. “ So I told the guys [on the last play of regulation], ‘Whatever you do, just make sure there’s a little bit of time left on the clock before you shoot just so I can get an offensive rebound.’

“[Black] attacked it and they didn’t put a body out on me. But I might have cleared some space out, too.”

In overtime, Johnson scored on a rebound, then got a defensive rebound, was fouled and hit two free throws with 3.7 seconds left to make it 78-74. He secured the victory by stealing the Aztecs’ inbound pass.

“He was doing that, just dominating and being a dog when he got out there. I’m really happy he hit the [game-tying basket]. It was crazy, but I’m not surprised at all. That’s what he does.”

Johnson has played 51 minutes the past two games after playing 22 in the first five.

“Anybody who knows me, knows I’m a team-first guy,” Johnson said. “I’m super engaged in the game, no matter if I’m playing or not.

“I’m up on the bench all the time and cheering and leading and helping in any way I can.”

Johnson remained patient with his limited minutes before the San Diego State game.

“You’ve just got to stay in the moment, stay locked in,” he said. “I think everybody on this team is going to have big games and big moments. We’re all going to need everybody throughout the year.”

“I think anybody has to admire a player that comes to work, tries to get better every day, has a role where maybe he would want a larger role, and then is able to produce when his number’s called,” Musselman said. “That takes great inner belief in yourself and it takes consistency on the practice floor.”

Johnson redshirted during the 2020-21 season after transferring from UALR. Then he played in 16 games for the Razorbacks last season when he averaged 2.3 points and 2.7 rebounds in 7.8 minutes.

Among Johnson’s best performances last season were having 15 points and 7 rebounds against Elon; 7 and 8 against Texas A&M; 7 and 6 against Mississippi State; and 6 and 8 against Tennessee.

“Being here for 2 1/2 years, I’ve seen how long a season is and how the roles switch and the opportunities switch and all that,” Johnson said. “So I think that’s just something that you’ve got to stick with it.”

Johnson, who is from Brooklyn, has stuck with things at Arkansas through some tough times.

In the summer of 2021, Johnson was arrested for disorderly conduct and then served a one-game suspension imposed by Musselman for the SEC opener at Mississippi State for an undisclosed disciplinary reason.

On Wednesday, Johnson went through graduation ceremonies after earning a communications degree.

“The graduation is something that was really important to Kamani and to his family,” Musselman said. “Proud of him for that.

“It’s been really cool to be part of his development. He’s got a great spirit about himself in practice. I think that this academic piece is important, because that’s a lifetime gift to be able to carry with you when the basketball stops. Having a degree is so important.

“We talked about it as a team [Wednesday] before we broke from practice, just the accomplishment that it was for Kamani to get that degree.”

Photos posted on Johnson’s Twitter account showed him celebrating at the graduation ceremony with family, teammates and Arkansas staff members.

“It feels like I was a freshman just a short time ago,” Johnson said. “So graduating was pretty crazy to me.”

Prior to the Troy game, the most minutes Johnson had played at Arkansas were 24 against Tennessee last season. His career high is 39 minutes against Texas-Arlington when he had 30 points and 13 rebounds during the 2019-20 season.

“The next day when I woke up my body was hurting,” Johnson said of how he felt Tuesday. “But I got with [trainer] Matt [Townsend] and got some treatment, so I’m pretty good.”

Johnson figures to stay in the playing rotation when the Razorbacks face San Jose State at 3 p.m. Saturday at Walton Arena.

“I think every game kind of takes on its own identity and its own theme on what’s needed on that particular night,” Musselman said. “But certainly, we’re really pleased with how Kamani has played these last two games. He’s been very, very, very important for our ballclub in both wins.”