QB Jefferson will return to Arkansas for 2023 season 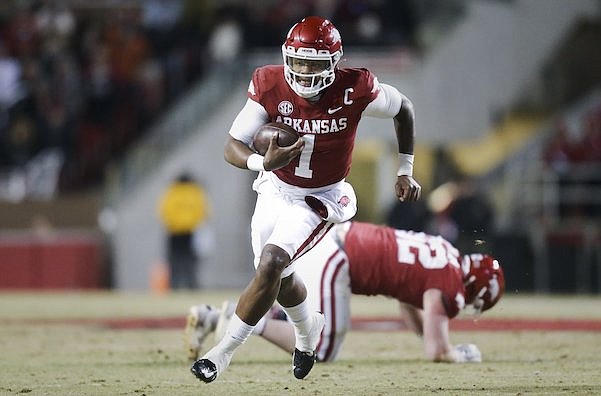 Arkansas quarterback KJ Jefferson (1) carries the ball during a game against Ole Miss on Saturday, Nov. 19, 2022, in Fayetteville.

FAYETTEVILLE — University of Arkansas quarterback KJ Jefferson warmed hearts on a cold day across the state by announcing on Friday he would return for his senior season in 2023.

"I want to thank God for directing me to Arkansas to start my college career," Jefferson wrote on Instagram. "I want to thank my mom for always being there, through good times and bad. I have learned so much from Coach (Sam) Pittman and Coach (Kendal) Briles on and off the field and can't thank them enough.

"As for the Arkansas fans, I have always loved playing for you all and the support you have given me is unmatched. With that said, it's time to fulfill my dreams...and my dreams wouldn't be complete without one more year on The Hill."

The draft-eligible redshirt junior from Sardis, Miss., has emerged as one of the nation’s top quarterbacks in two seasons as the Arkansas starter. The Razorbacks are 15-8 in games Jefferson has started since the 6-3, 242-pounder took the reins in 2021.

In the two games Jefferson missed this year, due to a concussion and a shoulder injury, respectively, the Razorbacks averaged 366 yards and 13.5 points in a 40-17 loss at Mississippi State and a 13-10 home loss to LSU.

With Jefferson in the lineup, the Razorbacks went 6-4, lost three games by two points and averaged 471.3 yards and 34.1 points per game.

Jefferson has advanced into the top 10 in the UA record books in multiple categories, including fourth in touchdown responsibility with 63.

The dual-threat quarterback owns the second- and third-best completion-percentage seasons in Arkansas history with his 68.3% this year and 67.3% in 2021. Feleipe Franks holds the school record with 68.5% completions in 2020. Jefferson can challenge that record with a strong performance in the Razorbacks’ bowl game.

Jefferson was ranked as the nation’s No. 9 quarterback among Power 5 schools by Pro Football Focus this week and he also ranks No. 9 in FBS pass efficiency with a 165.29 rating.

Jefferson is eighth in UA history with 5,529 passing yards, seventh with 46 touchdown passes and tied with Matt Jones for seventh with 417 completions.