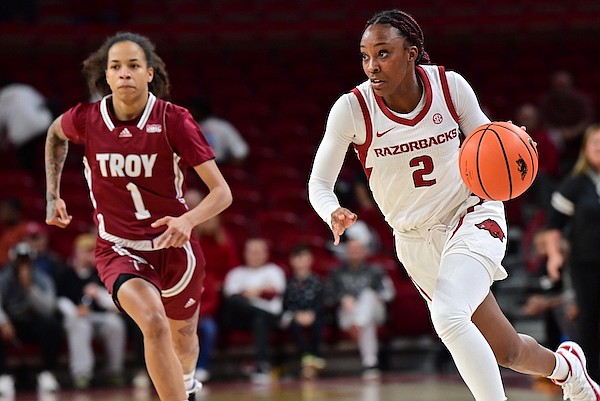 Arkansas guard Samara Spencer (2) dribbles the ball during a game against Troy on Thursday, Dec. 1, 2022, in Fayetteville.

FAYETTEVILLE— Coach Mike Neighbors' University of Arkansas women’s basketball team is off to its best start since 2016.

Arkansas (9-0) returned to Walton Arena following its Paradise Jam title and defeated Troy 87-70 behind five players scoring in double figures. The 17-point loss was the largest of the season for the Trojans (3-4).

“We knew we were going to be up for a challenge,” Neighbors said. “A team that when we scheduled them, they’re picked to win their league. Outstanding offensive team, they played great (and) they kept coming at us. Proud of our kids for doing what we had to do to get a win again.”

Both teams got off to a scorching start. The game’s first eight shots were all makes, including a pair of three-pointers by Arkansas' Makayla Daniels. Less than three minutes into the contest, 20 points were scored between the two teams.

“That’s the first time I’ve seen that,” Neighbors said of the quick scoring output. “Maybe one high school game, but that’s hard to do in these times.”

Arkansas took an 18-10 lead into the first media timeout after scoring eight consecutive points. The Razorbacks extended the advantage to 27-17 by first quarter’s end, rattling 11 points off nine Troy turnovers. Daniels scored all 10 of her points during the frame.

Neighbors’ team created more separation behind strong defense in the second quarter. Troy was limited to 1-of-12 shooting down the quarter’s final stretch, helping the Razorbacks to a 44-24 lead at intermission.

“The way we're kind of rotating, that seems to be where it's catching people,” Neighbors said of his team’s strong first-half close. “Like the end of second quarters and the beginning of the third quarters, our plus-minus is crazy. I think it's because we've come at you and there's some compounding effect on it. We go into halftime with some momentum, we come out and we keep it going.”

Troy came out pressing in the third quarter. The game’s physicality picked up, and a combined 13 fouls were called during the quarter. Arkansas managed to shoot 47.4% and outscore the Trojans by three in the quarter.

Sophomore guard Samara Spencer scored seven of her team-high 19 points during the 10-minute stretch. She led the team with six assists.

Erynn Barnum began the final quarter with three quick buckets, rewarded by her guards for running the floor while breaking the full-court press. Barnum ended with the team’s second-most points (18) and had eight rebounds.

“Erynn runs the floor hard and sometimes we can't reward her because that's what teams are taking away,” Neighbors said. “Well, tonight they weren't taking that away.”

With the game largely put away, the Razorbacks’ reserves played much of the game’s final period. Troy outscored Arkansas by six in the fourth quarter.

Jersey Wolfenbarger shot well from beyond the arc, knocking down 3 of 5 three-pointers.

“She's getting more and more comfortable back out on the perimeter,” Neighbors said. “It takes some time. After we had to play her around the basket last year, now she's a little bit more comfortable. (She) continues to improve every single night out and I love that she's accepted the role that she's been in.”

Chrissy Carr added 14 points and converted on a pair of triples.

It was a homecoming for Razorback great Chelsea Dungee, who is in her first season as an assistant coach for the Trojans. She was recognized in front of the Walton Arena crowd during the game’s first media timeout.

“I was like a beaming, proud friend,” Neighbors said. “You know, former coach out there watching her work in warmups, she's out there teaching the game, preparing her kids.”

Arkansas matched its 9-0 start in 2016-17. The Razorbacks are scheduled to host Oral Roberts inside Walton Arena at 2 p.m. Sunday.