'His energy was phenomenal': Brazile turns in career game vs. SJSU 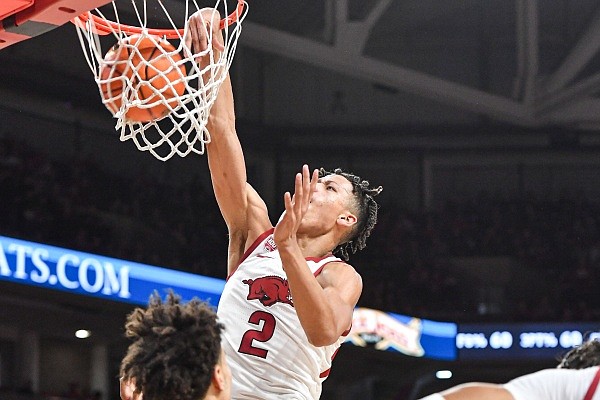 Arkansas forward Trevon Brazile (2) dunks, Saturday, Dec. 3, 2022, during the second half of the Razorbacks’ 99-58 win over the San Jose State Spartans at Bud Walton Arena in Fayetteville. Visit nwaonline.com/photo for the photo gallery.

FAYETTEVILLE — During 11th-ranked Arkansas’ first game back from the Maui Invitational, the Razorbacks got a below-average performance from Trevon Brazile against Troy.

Five days later, Brazile looked the part of an All-SEC selection against San Jose State. The 6-10 forward finished with a career-high 23 points, 5 rebounds, 2 assists, 2 blocks and 1 steal in the Razorbacks' 99-58 victory Saturday at Bud Walton Arena.

It was a big-time bounce-back game from the Missouri transfer, who contributed just 3 points in 25 minutes and committed 5 turnovers against Troy. He also did not grab a rebound during the 13-point win.

“I think he does a good job of just trying to kind of figure out what the defense gives him,” Arkansas coach Eric Musselman said Saturday. “Some games it has been spot-up threes. Tonight, I thought he did a really, really good job of beating people off the bounce in that trail spot.

“Maybe there were harder close outs to take away his threes. And he’s got an incredible long stride to the rim and covers a lot of space in very few dribbles.”

Brazile this season has turned in fewer than 10 points three times. In his next outing, he has averaged 17.7 points, 7 rebounds and 2.3 blocks.

The sophomore has also knocked down 5 of 8 attempts from three-point range in those games.

On Saturday, Brazile was 7 of 7 inside the arc, and he hit 1 of 2 three-point tries. His 7 two-point scores were a career high.

“I thought, again, his game off the bounce and his energy was phenomenal,” Musselman said. “And, I mean, (last week) was the first time I've been to Maui and it kind of does take its toll just because of the time change and your sleep patterns.

Star freshman guard Nick Smith, playing his first extended minutes of the season, scored a team-high 11 first-half points. Brazile was his wingman prior to the break, pitching in 9 points, 4 rebounds and 2 assists to go with 1 block and 1 steal.

Brazile, who has come off the bench in every game, took his play to another level in the second half, leading all Razorbacks with 14 points on 5 of 6 from the floor. As part of a quick 7-0 run, he added a layup then buried a right-corner three to put Arkansas ahead 57-43 with 13:47 remaining.

Brazile scored seven more points in the final 10-plus minutes. His one-handed dunk following an inside feed from Arizona State transfer Jalen Graham with 8:39 left was an ideal punctuation mark on a solid all-around game.

“I feel like Trevon could be a first-round pick if he plays hard all the time,” Smith said. “That’s one thing we try to implement every day is him just playing hard consistently. Obviously, tonight he scored attacking the basket (and) he’s got a good jump shot.”

“The guy to me is Brazile,” Miles said on the Spartans' post-game radio show. “Trevon Brazile is an NBA player for a long time. I mean, he's really impressive.”

Brazile last season at Missouri had a high of 15 points in his final game with the Tigers. He totaled more than 10 points in just four games for a team that finished 12-21 overall and 5-13 in SEC play.

This season he has scored 20-plus points four times. Brazile is averaging 13.3 points per game and shooting 39.3% beyond the arc.

On the other end, he ranks fifth in the SEC in defensive rebound rate (22.4%), according to KenPom data.

Brazile has largely been effective as a small-ball 5 for the Razorbacks. He is taking the challenge of being a core piece of Arkansas’ offense head on.

“Just stepping up offensively kind of because I have to,” Brazile said. “Coach Muss and them, all summer I was just doing skill development, working on my shot, working on offensive consistency. Last year, it was what it was. My role was a little bit lower than what it is this year.

“This year, just going into that role and being more aggressive on offense and being a leader for my teammates.”