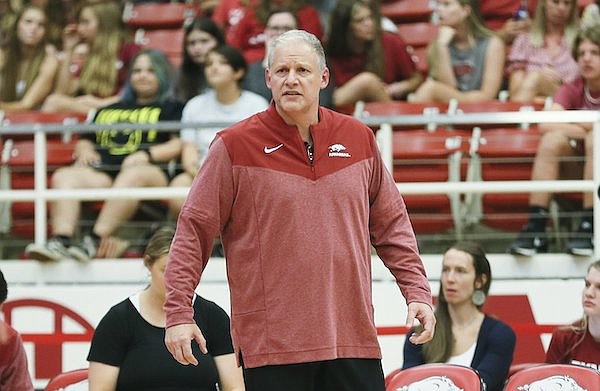 Arkansas volleyball coach Jason Watson is shown during a game against Washington on Saturday, Aug. 27, 2022, in Fayetteville.

The University of Arkansas volleyball team made its first NCAA Tournament appearance since 2013 on Friday and the Razorbacks made the most of it.

The Razorbacks will face the winner of the late Oregon-Loyola Marymount match tonight at 9 p.m. Central with a spot in the Sweet 16 on the line.

Taylor Head finished with a match-high 15 kills for Arkansas, while Jillian Gillen chipped in nine

It was Arkansas’ 12th NCAA Tournament appearance, but the win was the Razorbacks’ first since defeating St. Mary’s 3-1 in 2005. It’s also the first time the Razorbacks have put together back-to-back 20-win seasons since 2002-03.

Arkansas Coach Jason Watson thought his team might have been a little overwhelmed by the environment early, but settled down.

“Certainly pr0ud of the way our team evened out,” Watson said via Zoom. “Certainly proud of the runs they made that I thought created a little separation early and we were able to just play clean and close out both sets two and three.

“A pretty Arkansas-like performance in terms of just, we just love playing volleyball and I hope you saw that today.”

Watson said his group persevered after being left out a year ago.

“It started last when we thought we were a team that was worthy of inclusion in the tournament,” Watson said. “… So that stung and that hurt , but you know what are you gonna do about it? So I think this is what we’re gonna do about it. We’re gonna go be a better volleyball team.”

Watson said the Razorbacks’ serving put some pressure on the Aggies.

“I thought it created some pressure for them,” Watson said. “And they had to sustain perhaps not playing as quickly as they traditionally have been able to do. If you watched their run through their conference tournament which was incredibly impressive, they were really fast the entire time.

“I thought there were moments they got fast tonight and they got away from us but we were able to absorb some things.”