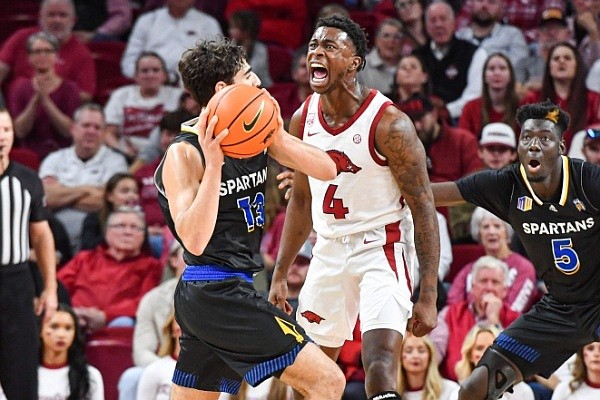 Arkansas guard Davonte Davis (4) screams while defending San Jose State guard Alvaro Cardenas (13), Saturday, Dec. 3, 2022, during the second half of the Razorbacks’ 99-58 win over the Spartans at Bud Walton Arena in Fayetteville. Visit nwaonline.com/photo for the photo gallery.

FAYETTEVILLE — Arkansas junior guard Davonte “Devo” Davis was back in action after missing Monday’s 74-61 win over Troy for personal reasons.

Davis did not score on 0-of-2 shooting off the bench in 22 minutes. However, he had a plus/minus rating of plus-23, dealt out 3 assists and had 1 blocked shot and 1 rebound.

“Last game on Monday, it was a little weird not having Devo,” sophomore Trevon Brazile said. “I don’t know what it is, he just brings a certain type of leadership to us.

“He’s just got kind of that dog mentality.”

“He was happy, he had bounce to his step,” Musselman said. “He can kind of just roll out there and compete. I probably give him a little bit more freedom than other guys, especially defensively.

“He’ll kind of randomly switch stuff, and I won’t know what he’s doing, and he kind of gets to the right spot and creates havoc.”

Trevon Brazile had a game to remember on Saturday as the 6-10 forward ran, jumped, dunked, blocked and displayed his athleticism in a 99-58 rout of San Jose State.

Brazile made 8 of 9 shots, including a three-pointer, and scored a career-high 23 points as the Hogs trucked the Spartans in the second half.

Brazile went 7 for 7 inside three-point range, most of them at or near the rim. He had gone 1 for 5 for 3 points against Troy with 5 turnovers and was one of the guys Coach Eric Musselman was referring to when he said some of the Razorbacks were still on “Maui time” against the Trojans.

“Everybody has off days,” Brazile said Saturday. “That just happened to be one of my off days. I’m going to do the same thing every time down the floor.

“My energy was a little bit low last game, but I just came out with high energy and just did the same thing I do every game.”

Musselman praised Brazile for getting a read on how he best fit in against the Spartans.

“I think he does a good job of just trying to kind of figure out what the defense gives him,” Musselman said. “Some games it has been spot-up threes. Tonight, I thought he did a really, really good job of beating people off the bounce in that trail spot.

“Maybe there were harder closeouts to take away his threes, and he’s got an incredible, long stride to the rim and covers a lot of space in very few dribbles.”

“I feel like Trevon could be a first round pick if he plays hard all the time,” Smith said. “That’s one thing we try to implement every day is for him just playing hard consistently.”

Once again, the Razorbacks’ sticky defense was a key factor.

Arkansas forced 18 turnovers by the Spartans and converted them into 32 points. San Jose State scored 12 points off 11 Arkansas turnovers.

“I thought San Jose State did a great job in the first half of controlling tempo,” Coach Eric Musselman said on the Razorback Sports Network. “We just kept using the phrase “wear them down, wear them down.” I thought our depth, especially in that second half, really prevailed.”

“One of the things we talked about at halftime was trying to increase our defensive pressure to try to get the game pace up a little bit,” Musselman said.

Arkansas used all 15 players on its roster for the first time this season and 10 of them scored.

“I think for sure from a depth standpoint, this is probably the deepest team I’ve ever had, yes,” Musselman said.

With Nick Smith joining the lineup this week and Davonte Davis back, managed substitutions promises to be a real exercise for the Arkansas coaches.

“I can tell you in the first half I felt discombobulated a little bit trying to get guys in,” Musselman said. “But I have to maybe adapt a little bit as well. And every game kind of changes too.

“Like, I just told the team I have no idea what’s going to transpire on Tuesday.”

Jalen Graham had his best game as a Razorback with 11 points in 12 minutes, all in the second half.

Graham had been limited to two minutes and no points in the last three games, including two “did not plays” against Creighton and Troy.

The 6-9 senior transfer from Arizona State made 4 of 5 shots and all three of his free throws in a season-best playing time. Graham had scored a season-high 10 points in a win over Fordham

“His practice habits this week were the best since he’s been here, so without discussing it with anyone, I felt like coming into the game that if I did not reward him with some minutes, it would be unfair,” Coach Eric Musselman said. “We have those [tracking vests] that we wear and you can look at the energy that they [expend], however many jumps they do and all that stuff. He had his best week, so I’m glad he got an opportunity to play when the game was in the balance.”

The Razorbacks tied their season high with eight made three-point shots and hit a season-best 61.5% (8 of 13) from beyond the arc.

Nick Smith led the way with 3-of-5 shooting from three-point range, while the quintet of Anthony Black, Ricky Council, Trevon Brazile, Joseph Pinion, and Cade Arbogast hit one each and combined to go 5 of 8.

Arbogast made his three-pointer with 1:32 remaining to give the Razorbacks 97 points, and with the crowd clamoring to hit the 100-point mark, Arbogast missed his final long-range shot with 1 second left.

Arkansas had made eight three-pointers in back-to-back outings against Louisville and Creighton in the Maui Invitational.

The Razorbacks were already pulling away in the second half when they made a 6-0 run in a flash to put the Spartans away.

Trevon Brazile made a free throw at the 10:43 mark to make it 65-48. He missed the second free throw, but Jalen Graham grabbed an offensive rebound. Five seconds later, Davonte Davis fed Ricky Council for a forceful reverse one-hand dunk.

Moments later, Council stole a pass from Omari Moore and the deflection went to Anthony Black, who hit a driving shot, was fouled by Myron Amey, and completed a three-point play for a 70-48 lead with the 23-second burst.

Ricky Council brought some excitement to give the Razorbacks a 11-9 lead in the opening minutes. Black stole a pass from Alvaro Cardenas just outside the paint and went coast to coast for a thunderous dunk, with Cardenas stepping aside in the paint.

Council had a reverse dunk in the second half, another crowd pleaser.

The 6-6 junior scored 17 points on 5-of-6 shooting and is the only Razorback who has scored in double figures in all eight games.

Trevon Brazile converted a pair of three-point plays midway through the first half to give the Hogs some separation. Both plays were facilitated by Arkansas guards.

With 12:11 remaining, Brazile caught an over-the-shoulder entry from Davonte Davis and banked in a short jumper while being fouled by Tibet Gorener.

On the Razorbacks’ next possession, Nick Smith fed the 6-9 Brazile for another short jumper as he was being fouled by Robert Vaihola. Brazile made the free throws at the 11:36 mark to give the Razorbacks a 17-11 lead.