Smith stars for first time with Hogs in blowout 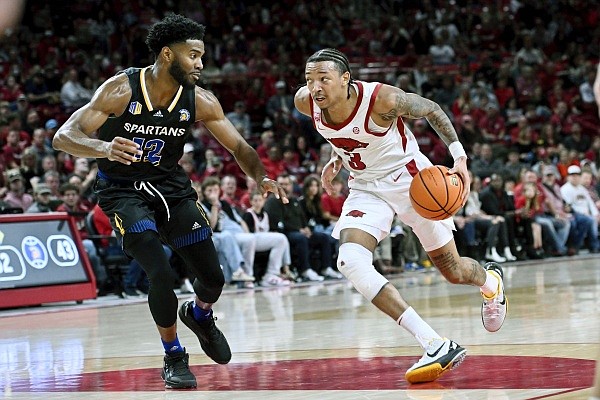 FAYETTEVILLE — The way Nick Smith figured it, his real debut for the University of Arkansas basketball team was on Saturday when he helped the No. 11 Razorbacks beat San Jose State 99-58 in Walton Arena.

Smith, a 6-5 freshman guard from Jacksonville, played off the bench in Arkansas’ 74-61 victory over Troy after missing the first six games recovering from a right knee injury, but he was on the court for just six minutes and didn’t score on 0-of-2 shooting.

Smith, who turned 18 in April, scored 16 points and added five assists playing 24 minutes against San Jose State without a turnover.

“I feel like I played OK,” said Smith, a preseason first-team All-SEC pick by the coaches and media. “I feel like I can play a lot better, but that just comes with time.

“That was actually my real first time getting out there. Just trying to compete, trying to win the game. I mean, it was fun.”

Smith started and didn’t take long to impact the game. He drew an offensive foul from 7-0 Ibrahima Diallo with 18:10 left in the first half, then 13 seconds later hit a three-point basket.

“Building up to this week, we all knew Nick was excited to get out there,” said sophomore forward Trevon Brazile, who led the Razorbacks with a career-high 23 points and hit 8 of 9 shots. “We always know Nick brings a lot of energy.

“You just love to see him get back on the court and do his thing.”

More from WholeHogSports: Brazile turns in career game against Spartans

“It was tough on him, the minutes restriction,” Arkansas Coach Eric Musselman said of Smith’s game against Troy. “I know he didn’t like it. Also, I think that first game for any player [coming back from an injury] is a challenge.

“Tonight he played with great freedom, I think, even mentally. He knew there was no minutes restriction on him. He changes our team offensively with his ability to make threes and beat people off the bounce.”

While Smith’s return gave the Razorbacks (7-1) a boost, the first half featured 12 lead changes and four ties before Arkansas took a 40-35 halftime lead.

Shooting 75.9% (22 of 29) in the second half, Arkansas kept pouring it on to build the lead to 41 points in the final seconds even when Musselman cleared the bench.

“I feel like our team can be scary,” Smith said. “Coming into the summer time on the first day, I saw how much talent we had. I feel like we can be the best team in the country.

“I feel like we can compete for a national title.”

“I thought we really looked like a connected team,” Musselman said of the second-half domination.

Junior guard Ricky Council had 17 points, 3 rebounds and 3 assists for the Razorbacks and senior forward Jalen Graham had 11 points, 6 rebounds and 2 drawn charges in 12 minutes off the bench.

The Razorbacks outscored the Spartans 52-30 on points in the paint, 32-12 on points off of turnovers and had 22 assists compared to 11 turnovers.

Junior guard Omari Moore led San Jose State with 21 points, but was held to five in the second half.

Davonte “Devo” Davis, a junior guard who started the first six games for the Razorbacks, missed the Troy game for an undisclosed reason. He returned to the team on Wednesday and played 22 minutes off the bench against San Jose State and had three assists.

“Devo had great days of practice,” Musselman said. “He was happy, he had a bounce to his step. I thought we did miss him the other night, and I think everybody was happy to get him back.”

Saturday was the first game this season in which all 13 scholarship players were available for Arkansas.

“Obviously I’ve been waiting on this moment ever since I made the decision to come here,” Smith said. “I feel like it was great for us as a team, just to have our whole team playing.”

“As long as I continue to work hard, continue to build chemistry on the court with my team, I feel like I can be a key piece to this puzzle,” Smith said. “This team complements each other. They allow me to play my game. I feel like we can do a lot of good stuff this year.”

Smith has been projected as a top-five pick in several mock NBA drafts.

“I think Nick will just keep getting better,” Musselman said. “He’ll keep getting more comfortable. His teammates will start understanding his tendencies. Look, he was disappointed last game. His expectations of his first game were different than what happened, and he told me that.

“I told him that I’m a little older and I knew the first game, when you have a player that has been injured, it’s not easy that first game.”

Smith made the game look easier on Saturday.