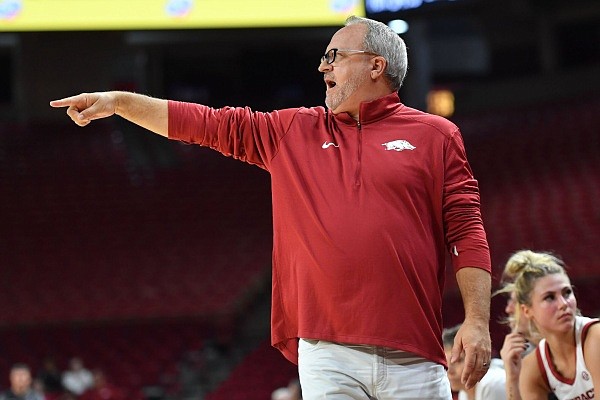 Arkansas Coach Mike Neighbors directs his players on the floor during an exhibition against Arkansas-Fort Smith on Nov. 2, 2022, in Bud Walton Arena in Fayetteville.

Arkansas (9-0) is one of 20 unbeaten Division I teams and is on the cusp of its first top 25 ranking since 2021. The Razorbacks most recently beat Troy on Thursday.

That game followed three wins in the U.S. Virgin Islands. Five of Arkansas’ nine wins have either come in true road games or at a neutral site.

Razorbacks coach Mike Neighbors hopes the environments he has challenged his team in will be rewarded when the first NCAA Evaluation Tool (NET) rankings of the season drops soon. The metric serves as the NCAA’s primary rating when sorting teams for postseason invitations.

Road and neutral-site wins are weighted heavily with the tool.

More from WholeHogSports: Coverage of Arkansas' 99-58 win over San Jose State on Saturday

“I’ll be interested to see when the NCAA starts releasing the NET,” Neighbors said. “I think our team has earned (a high ranking) with the win over Kansas State, and also Kent State, Troy, are both ranked in the mid-major poll.

“We’ve gone on the road to play a SWAC team that wasn’t a part of a challenge or league making us go do it.”

The last hurdle for Neighbors’ team before the NET debut is Oral Roberts. The Golden Eagles are one of the Razorbacks’ most commonly faced non-conference opponents, with Arkansas holding a 23-9 all-time advantage.

A win today would give Arkansas its 10th consecutive win to start the season, which would be the best start since the 2013-14 team began 13-0.

“I am proud of our kids,” Neighbors said of the hot start, “because, again, the schedule was put together to challenge us, not necessarily to get to 9-0. But to be there is really cool. I think when we look back on that 9-0 start, we’ve beaten some good teams.

“We got there in the right way. We didn’t play a bunch of teams that are going to end up (slotted) 300 in the NET next week when you see them come out.”

Oral Roberts (2-6) is in its first season under coach Kelsi Musick, who was previously at Southwestern Oklahoma State, where she led the Lady Bulldogs for 13 seasons. She coached SWOSU to the Division II National Championship Game in 2019.

Senior guard Hannah Cooper is the team’s leading scorer, averaging 19 points per game. She leads the Summit League in total points (152), free throws made (38), assists (37) and field goals made (53). Forward Tirzah Moore is averaging a double-double at 11.8 points and 11.3 rebounds.

For the Razorbacks, it has been a balanced attack with four different players averaging double figures in scoring. Senior forward Erynn Barnum has elevated her play this season, leading Arkansas at 16.9 points and 7.9 rebounds per game.

The team is coming off a game in which it assisted on 20 of its 31 field goals.

Neighbors said the offense is beginning to really take form, but continues to preach the importance of how his squad is performing defensively. The Razorbacks are holding teams to 33.5% shooting and 57.8 points per game.

“I think our offense is in good shape,” Neighbors said. “But, you know, I’ve been really proud of our defense.”

Sunday's game in the second of a four-game homestand for Arkansas. The contest will stream live on SEC Network-Plus.