What to know about Kansas, Arkansas' opponent in the Liberty Bowl 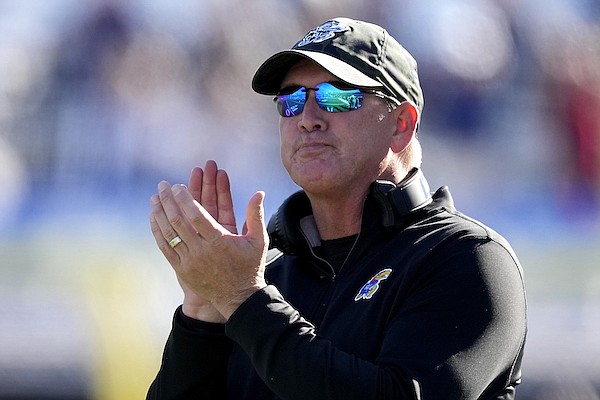 FAYETTEVILLE — Kansas was one of college football’s feel-good stories in the first half of the 2022 season.

The Jayhawks began their campaign 5-0 and were ranked 19th by Associated Press voters prior to an Oct. 8 game against TCU that drew ESPN’s “College GameDay” to Lawrence, Kan., for the first time.

Quarterback Jalon Daniels injured his shoulder during that 38-31 loss to the Horned Frogs. Daniels did not return until Nov. 19 when the Jayhawks lost 55-14 at home to Texas.

Kansas struggled to a 1-6 finish against Big 12 competition, but earned bowl eligibility for the first time in 14 years with a 37-16 victory over Oklahoma State on Nov. 5. The Jayhawks lost their final three games to Texas Tech, Texas and Kansas State by an average score 48-23.

Second-year Kansas coach Lance Leipold signed a contract extension in November that runs through 2029. Leipold, who won six NCAA Division III championships at Wisconsin-Whitewater between 2007-14, has been a miracle worker for the Jayhawks.

The Liberty Bowl will be Kansas’ first bowl game since 2008, when the Mark Mangino-led Jayhawks defeated Minnesota 42-21 at the Insight Bowl in Tempe, Ariz.

On Nov. 19, Arkansas running back Raheim “Rocket” Sanders had a field day against Ole Miss to help the Razorbacks become bowl eligible for the second consecutive season under Sam Pittman.

Two weeks earlier, Kansas tailback Devin Neal put on a show of his own to guide the Jayhawks to bowl eligibility. The Lawrence, Kan., native rushed for a career-high 224 yards and 1 touchdown on 32 carries as Kansas blew out Oklahoma State 37-16.

His play aided the Jayhawks in snapping, at the time, a three-game losing skid, and a 12-game losing streak in their series with the Cowboys.

“The performance of Devin Neal was just outstanding,” Leipold said after the game. “We had talked about how we needed him to have one of those games, and he answered that.”

Neal, who stands 5-11 and 210 pounds, also finished with 110 receiving yards on six catches against Oklahoma State. He went into the game with 6 grabs for 33 yards in the first 8 games.

Neal, the Doak Walker co-national running back of the week on Nov. 8, is talented and well-rounded.

He rushed for an average of 93.9 yards per game on 16 carries and totaled 7 touchdowns during Big 12 play.

The game following his career day against the Cowboys, Neal ran for 190 yards vs. Texas Tech, and he averaged 66 rushing yards against ranked teams, including 88 against College Football Playoff-bound TCU.

According to Pro Football Focus data, Neal is the Jayhawks’ top-graded offensive player (79.1) and holds the team’s best rushing grade (82.9).

If there is an area of Neal’s game that Arkansas could potentially take advantage of, it is his pass blocking. PFF numbers show he has a cumulative grade of 40.5 in that category, including marks of 18.2 vs. Oklahoma and 23.6 vs. Texas.

Neal, a former 4-star prospect in the 2021 recruiting class, committed to Kansas over offers from Iowa, Kansas State, Nebraska and Oklahoma State.

“You need people that are determined to help get programs turned around, and Devin Neal is definitely one of those.”

Like Arkansas, Kansas has struggled mightily at times on defense this season.

The Jayhawks rank 119th nationally in scoring defense (33.8 points per game). That mark is fifth worst among teams in Power 5.

Kansas is one of the nation’s worst teams defending the run (193.8 yards per game). That is worth watching as Arkansas enters the game ninth nationally in run offense (223.4 yards per game).

One bright spot defensively for the Jayhawks has been the play of cornerback Cobee Bryant, who has three interceptions and eight pass breakups.

Bryant recorded one of the year’s more unusual plays when he returned an interception 86 yards for a touchdown to seal a 55-42 overtime victory over West Virginia. Bryant also had a pick-six against Texas last season.

Arkansas finished the regular season as one of the best in the country in terms of sacking the quarterback.

The Razorbacks enter postseason play tied for fifth nationally with 39 sacks, which match Arkansas’ output in Pittman’s first two seasons with the program. They had at least 2 sacks in 9 of 12 games this year.

However, Arkansas has its work cut out for itself in the Liberty Bowl. Only five FBS programs have allowed fewer sacks than the Jayhawks (9).

Two of them — Georgia, Ohio State — are in the College Football Playoff.

PFF data shows that Kansas is strong on the left side of the line thanks to guard Dominick Puni and tackle Earl Bostick. Puni is the Jayhawks’ top offensive lineman in terms of pass-blocking grade (75.7), and Bostick is second at 73.1.

The offensive line helped Kansas average 193.9 rushing yards per game and 230.8 yards through the air. Kansas rushed for 824 yards and 7 touchdowns in November, up from 522 yards and 6 scores in October.

• Kansas has six kickoff returns of at least 30 yards this season, including three by Kenny Logan.

• The Jayhawks rank seventh nationally with a third-down conversion rate of 50.4%.

Arkansas has not played Kansas since the teams completed a home-and-home agreement in the early 1900s.

The programs are linked by a fateful coaching move in 1957, however. Jack Mitchell left Arkansas for Kansas after guiding the Razorbacks to a 17-12-1 record from 1955-57. Mitchell grew up in Arkansas City, Kan.

Mitchell’s successor in Arkansas went on to a much more storied career. Frank Broyles became the Razorbacks’ all-time wins leader with a 19-year record of 144-58-5. Broyles’ 1964 team was voted national champion by the Football Writers Association of America, and Arkansas won or shared seven Southwest Conference championships during his tenure.

Pittman, the third-year Arkansas coach, spent the 2001 season as an assistant coach at Kansas.

The Jayhawks finished 3-8 that season and their head coach, Terry Allen, was fired one day following a 51-7 home loss to second-ranked Nebraska. Pittman was not retained and spent the following year out of coaching.

Kansas will be the fifth program that once employed Pittman to play one of his Arkansas teams. Pittman is 3-4 in games against schools where he was once an assistant coach — Georgia, Tennessee, Missouri and Cincinnati.

Pittman has other ties to the state of Kansas. He played college football at Pittsburg State from 1980-83, and spent three seasons coaching Hutchinson Community College, where he was a head coach from 1992-93.