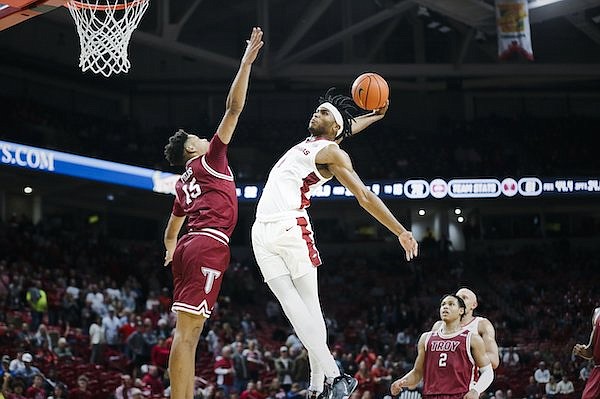 Arkansas guard Ricky Council (1) dunks over a Troy defender during a game Monday, Nov. 28, 2022, in Fayetteville.

With 10:37 remaining, junior guard Davonte Davis fed Wichita State transfer Ricky Council a no-look pass in transition for a rim-rattling one-handed dunk. The bucket put the Razorbacks ahead 67-48, and they never led by fewer than 20 points the rest of the way.

It was another prime example of Council’s bounce and high-level finishing ability benefitting Arkansas in the early stages of the season. Two days later he was named SEC player of the week after averaging 22 points, 3 rebounds and 2 steals in the team’s wins over Troy and San Jose State.

"He's done a great job of attacking both in the half-court and in transition,” Razorbacks coach Eric Musselman said Monday. “We knew he was an excellent athlete.”

Through Arkansas’ first eight games, Council has far and away been its top performer in terms of rim scores. According to CBB Analytics, he has made 25 of 30 attempts within four feet of the rim.

The site’s data reads that his field goal percentage (83.3%) in that region of the floor is 19.2% above the Division I average.

Council’s well-rounded offensive game has been a major storyline in the opening weeks of the season. Not only is he second on the team in three-point makes with 10, he has a team-high 50 two-point scores.

More from WholeHogSports: Razorbacks jump back into AP top 10

Council, too, is 10 of 24 on mid-range jumpers, according to CBB Analytics.

“He has the ability to make three-point shots,” Musselman said. “I think he's further ahead maybe than what we thought at this juncture of the season of being really good in ball screens and handling in pick-and-rolls. A couple of the games in Maui, one of them he was used as a ball handler in pick-and-roll and another game we tried to (isolate) him on the elbow.

“He's had a phenomenal start to the season, without a question."

But his finishing — both above the rim and through acrobatic layups with both hands — has been most impressive. A “wow” moment or two in which he flashes electric athleticism is a near certainty each game.

Council, with at least one defender in the vicinity, has put down a pair of SportsCenter-worthy reverse dunks this season. His high-above-the-rim tomahawk slams in transition have been crowd-pleasers, as well.

Asked if Council’s powerful, aggressive dunks and attacking mentality reminded him of a former player, Musselman mentioned Caleb Martin, who played for him at Nevada and is a key piece for the NBA’s Miami Heat. But the Razorbacks do not see Council soar a lot in practices.

“The way that we do practice, we just don’t go live very much,” Musselman said. “We have a lot of drills, a lot of stationary breakdown, a lot of non-contact once we get into November and December and January. I mean, after practice guys will have dunk-offs and dunk contests and things like that, but in live action, a lot of times what we’re seeing in games is sometimes the first time.

“And, certainly, I think when you play in a game you’ve got a little bit more juice to attack the rim than you would in practice.”

The bouncy wing enters Tuesday’s home game against North Carolina-Greensboro as the SEC’s top scorer at 19.8 points per game on 53.1% shooting. Both figures are career highs.

He is also tied for seventh in the league at 2.0 steals per game. Council averaged 1.1 steals per outing last season.

“He’s done a great job setting the tone for us, especially on the offensive end. I think he can continue to set the tone defensively, as well.”