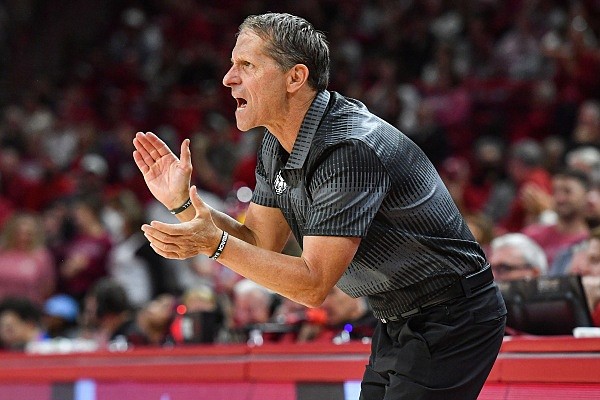 Arkansas coach Eric Musselman reacts, Saturday, Dec. 3, 2022, during the second half of the Razorbacks’ 99-58 win over the San Jose State Spartans at Bud Walton Arena in Fayetteville. Visit nwaonline.com/photo for the photo gallery.

FAYETTEVILLE — Arkansas’ men’s basketball team is back in the top 10 of The Associated Press Top 25 poll.

The Razorbacks (7-1) came in at No. 9 in the latest poll released Monday. It marks the first time since 1994-95 that Arkansas will spend three weeks inside the top 10 in a regular season.

The Razorbacks were tied with Alabama at No. 11 in last week’s rankings.

Arkansas last week went 2-0 with victories over Troy (74-61) and San Jose State (99-58). Wichita State transfer Ricky Council averaged 22 points in the wins, and he led the Razorbacks with 27 points on 12 of 18 from the floor against the Trojans.

Star freshman guard Nick Smith did not score in his Arkansas debut vs. Troy, but he contributed 16 points against the Trojans on Saturday in his first start as a Razorback. Freshman guard Anthony Black pitched in 11 points, 6 rebounds, 4.5 assists and 1 steal per game.

Arkansas returns to play Tuesday against North Carolina-Greensboro in Bud Walton Arena. Tipoff is set for 6 p.m., and the game will air on SEC Network.

The Razorbacks will close the week against Oklahoma (6-2) at BOK Center in Tulsa. The game is scheduled to begin at noon on ESPN2.

UNC-Greensboro, in Year 2 under coach Mike Jones, is 4-5 this season and will come in fresh off a 65-61 win over Elon on Saturday.

Senior forward Keondre Kennedy, who stands 6-6, leads the team in scoring at 15.4 points per game, but he has not played in the Spartans’ last two games for an undisclosed reason.

The Razorbacks debuted Monday in the NCAA NET Rankings at No. 25, which is fifth-best in the SEC behind Tennessee (4), Mississippi State (5), Alabama (8) and Auburn (21).

The NET is a system the NCAA adopted to replace the Ratings Percentage Index (RPI). It is based on game results, the quality of victories — including where the game is played — and strength of schedule.