Ahead of UNCG game, Hogs debut at 25 in NET 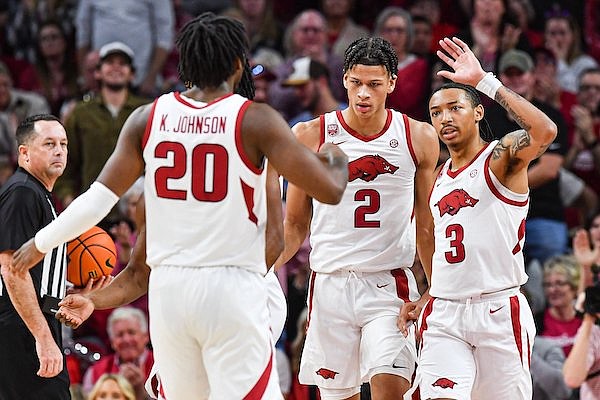 FAYETTEVILLE — When it was announced in August that Arkansas would play Louisville in the Maui Invitational, it figured to be a boost for the Razorbacks’ strength of schedule regardless of the outcome.

Louisville is a traditional power with three national championships, 10 Final Four appearances and a 76-44 record in the NCAA Tournament.

But the Cardinals are still looking for their first victory under first-year Coach Kenny Payne, so Arkansas’ 80-54 victory over Louisville in the Lahaina (Hawaii) Civic Center on Nov. 21 helps explain why the Razorbacks (7-1) are No. 25 in the first NCAA Evaluation Tool rankings released on Monday.

Media members who vote in The Associated Press poll have Arkansas at No. 9 — up two spots from last week — after the Razorbacks beat Troy 74-61 and San Jose State 99-58.

Coaches are even higher on the Razorbacks, voting them No. 8 in the USA Today poll going into Arkansas’ 6 p.m. game against North Carolina-Greensboro (4-5) in Bud Walton Arena tonight.

But with Louisville being No. 361 in the NET rankings, ahead of only Houston Christian and Hartford, the Razorbacks would have been better off playing any of 359 other Division I programs in regards to the poll used by the NCAA Tournament selection committee to help choose and seed teams.

The Cardinals fell to 0-8 with their 80-53 loss to Miami at home on Sunday in the ACC opener. It is Louisville’s worst start since the 1940-41 season, when the Cardinals lost their first 11 games and finished 2-14.

More from WholeHogSports: Council setting the tone for No. 9 Arkansas in variety of ways

Fortunately for the Razorbacks, they have 11 regular-season games left against teams in the NET’s top 46 and could add more in the SEC Tournament.

“I think that the NET changes drastically once we get into SEC play, because of the seasons so many SEC schools are having,” Arkansas Coach Eric Musselman said. “So I think with our NET, we have the potential to rise in that certainly depending on our play.”

Oklahoma, which the Razorbacks play Saturday in Tulsa, is No. 46 in the NET rankings. Baylor, where Arkansas plays in the SEC/Big 12 Challenge on Jan. 28, is No. 32.

“Mississippi State has done a great job. Missouri has played great basketball,” Musselman said. “There are a lot of programs in the SEC right now that have had really, really good non-conference success.

“Obviously, Tennessee and Kentucky and Auburn and Alabama. There are a lot of teams that are really playing good basketball.

More from WholeHogSports: Everything you need to know about Arkansas' home game against UNC-Greensboro

“The SEC, just like the last couple years, is really challenging every night.”

Musselman said the Razorbacks need to focus on their game against UNCG, which is No. 242 in the NET rankings.

Tonight is the Spartans’ second game against a Power 5 conference opponent. They lost at Miami 79-65 on Nov. 11 when UNCG led 34-33 at halftime before the Hurricanes rallied to win.

The Spartans start five seniors and are led by 6-6 guard Keondre Kennedy, a transfer from Maryland-Baltimore County who is averaging 15.4 points and 7.3 rebounds and has hit 15 of 40 three-pointers.

Kennedy will be back in the lineup tonight after missing the previous two games.

“He can really score the basketball,” Musselman said. “He can shoot it from three. He’s good in transition. He’s a good rebounder for his size.

“Obviously, he’s their best offensive player, numbers-wise. So he does change the complexion of the game for them for sure.”

Mikeal Brown-Jones, a 6-8 junior transfer from VCU, is averaging 11.1 points off the bench for the Spartans and had a career-high 20 points in their 65-61 victory at Elon last Saturday.

Senior guard Keyshawn Langley is averaging 11.6 points for UNCG and has hit 22 of 56 three-pointers.

More from WholeHogSports: Arkansas returns to top 10 of AP poll

The Spartans have 58 steals, including 21 by senior guard Kobe Langley — the twin brother of Keyshawn.

“Their backcourt, they create a lot of steals,” Musselman said. “They play very aggressive defense. They’ll reach and gamble and try to create some offense through their defense. Certainly us taking care of the basketball will be extremely important against UNCG.”

While Arkansas continues to navigate its non-conference schedule, Louisville’s next game is another ACC matchup at Florida State. The Seminoles are 1-9 with their lone victory over Mercer, 81-72, so maybe Louisville has a shot to win.

“I think that Coach Payne will figure out a way to continue to improve that team,” Musselman said. “It’s always hard on a first-year coach in any sport. It’s really difficult to try to put schemes in offensively, defensively, and then your culture, as well.

“But certainly in the Maui Classic, looking at the field, you think there’s going to be three real quality opponents.”

For the Razorbacks, they faced two quality opponents in Hawaii as they lost to then-No. 10 Creighton 90-87 and beat then-No. 17 San Diego State 78-74 in overtime.

SEC in the NET

The first NCAA Evaluation Tool rankings of the season were released Monday. The NET rankings are used by the NCAA Tournament selection committee to help choose and seed teams.

The ranking is primarily based on a team’s record — especially in road and neutral-site games — and strength of schedule.

Here is a rundown of where SEC teams and teams in Arkansas rank: