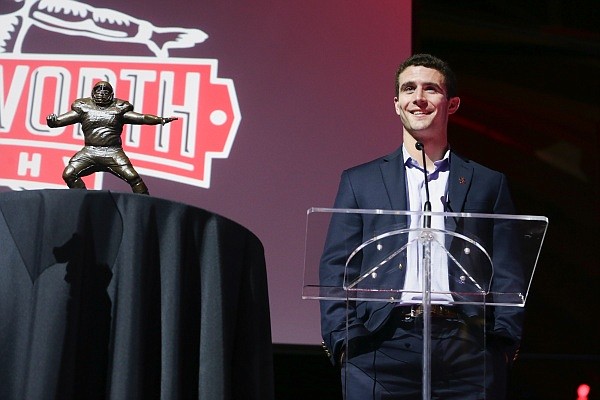 BENTONVILLE — Georgia quarterback Stetson Bennett won the 2022 Burlsworth Trophy on Monday night as the nation’s top player who began his career as a walk-on.

Bennett, a finalist last season, was awarded the trophy at a ceremony at Crystal Bridges Museum of American Art after voting by the 11-member Burlsworth Trophy selection committee.

Bennett hugged his fellow finalists — Purdue quarterback Aidan O’Connell and Troy linebacker Cartlon Martial — and a group of family members and teammates before taking the trophy.

“Wow, this is a special honor,” Bennett said while thanking Marty and Vicky Burlsworth. “This award is what it is because of who Brandon was and what he did, but you two are a big part of this.”

Bennett also thanked his parents and other family members.

“I am who I am because of you,” he said to his parents Denise and Stetson. “I wouldn’t trade any of this for any of that. I hope I said that right.”

Bennett, who was announced as a finalist for the Heisman Trophy on Monday evening, won the Burlsworth over Martial and O’Connell.

More from WholeHogSports: What to know about No. 9 Arkansas' home game against UNC-Greensboro

“Aidan and Carlton, you two are studs,” Bennett told his fellow finalists from the podium.

Bennett and Martial were finalists last year along with Arkansas linebacker Grant Morgan, the first Razorback to win the trophy named for Burlsworth, the Harrison native and former Arkansas offensive lineman.

Bennett is the grandson of the late Buddy Bennett, who coached defensive backs at Arkansas from 1970-72 under legendary Coach Frank Broyles.

The ceremony featured plenty of clips from all three players, testimonials from their parents and even a clip from “Jeopardy!” The Burlsworth Trophy was part of a question on “Jeopardy!” during the last year, with long-time champion and recent Tournament of Champions winner Amy Schneider correctly answering the question, “What is a walk-on?”

After the clip, emcee Jon Williams replied, “What is awesome?”

Bennett walked on at Georgia, transferred to Jones (Miss.) Community College, then came back to the Bulldogs. His first substantial playing time came at Reynolds Razorback Stadium in Fayetteville in the 2020 season opener, when he completed 20 of 29 passes for 211 yards and 2 touchdowns in relief in the Bulldogs’ 37-10 victory.

Bennett said he could hardly have envisioned the path his career has followed while he was playing junior college ball in Mississippi.

The three finalists were all in conference championship games on Saturday, with Bennett and Martial both on title-winning teams.

Bennett’s Bulldogs (13-0) dominated LSU 50-30 at Mercedes-Benz Stadium in Atlanta and received the No. 1 seed for the College Football Playoffs, where they will take on No. 4 seed Ohio State at the Peach Bowl on Dec. 31, also in Atlanta, in defense of their 2021 CFP championship.

The MVP of last year’s CFP Championship Game against Alabama, Bennett has passed for 3,425 yards, with 20 touchdowns and 6 interceptions and he has rushed for 184 yards and 7 touchdowns this season.

Martial and Troy won their seventh conference title, and first since 2017, with a 45-26 win over Coastal Carolina in Troy, Ala., on Saturday, its 10th win in a row.

Martial, the Sun Belt Conference Defensive Player of the Year, snapped the NCAA’s all-time tackles record while stacking up 121 this season, his fourth consecutive year with 100-plus tackles.

Martial will take his 551 career tackles into the Trojans’ appearance in the Cure Bowl in Orlando, Fla.

“That means a lot to me, but I say it’s more about the season,” Martial said. “The record and all the individual accolades is just icing on the cake at the end. The big cake that we wanted was a conference championship and we got that.”

O’Connell and the Boilermakers dropped a 43-22 decision in the Big Ten Championship Game to No. 2 Michigan, which is headed for its second consecutive appearance in the CFP.

O’Connell passed for 3,490 yards and 22 touchdowns in the regular season while completing a school-record 64.1% of his passes and leading the Boilermakers to an 8-5 season. He passed for 424 yards against Syracuse and surpassed 300 passing yards in five games this year.

O’Connell was more than buried on the Purdue depth chart his first season. When event host Rick Schaeffer asked how there were eight quarterbacks on the Boilermakers’ roster that season, O’Connell quickly corrected, “We had nine. So I was eighth out of nine on the depth chart.”

Purdue will face LSU in the Citrus Bowl in Orlando on Jan. 2.

More from WholeHogSports: Council setting the tone for Razorbacks in variety of ways

As has been the case with most groups of Burlsworth finalists, the three became fans of the others during events on Monday, including a trip to Lincoln Elementary in Bentonville.

“This is just a fantastic event,” Bennett said. “This museum is beautiful. It’s a top-notch event, and it was great getting to do other things and seeing Carlton again, especially. He broke the all-time NCAA tackles record. That’s a big deal.”

Said Martial, “This is like a family type deal now. I just love being back. … I’m always hyped to see Stet. Me and his father, we have a close relationship, so it’s good to see him again.”

O’Connell said a couple of years ago he was introduced to the Burlsworth story by his wife Jael.

“This is an award I’ve known about for a few years,” he said. “My wife actually introduced me to the movie [“Greater”] back in 2020. She grew up a huge Brandon Burlsworth fan and an offensive line fan.

“She got me in touch with it first and I was like, ‘Man, that would be a cool award to be considered for one day, so to be here now is awesome.”

O’Connell said his wife must have really liked him.

“She started dating me when I was fourth or fifth on the depth chart, so I guess she really liked me,” he told Schaeffer as laughter erupted throughout.