Saban can stew, but TCU is more deserving 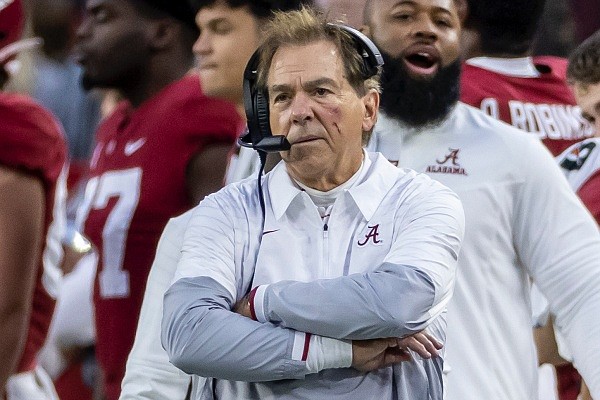 Alabama coach Nick Saban paces the sideline with an injured face during the first half of an NCAA college football game against Auburn on Saturday, Nov. 26, 2022, in Tuscaloosa, Ala. (AP Photo/Vasha Hunt)

There is no doubt that some believe a two-loss Alabama team deserved to be in the College Football Playoffs over one-loss Ohio State or TCU.

In my opinion, the selection committee nailed it perfectly with No. 1 Georgia, No. 2 Michigan, No. 3 TCU and No. 4 Ohio State.

If the Horned Frogs were left out – which many apparently believed would happen because the Big 12 doesn’t have the same history and reputation as far as football is concerned as Alabama – it would have been punished for making it to their championship game.

At halftime of Michigan’s win over Purdue, Fox television, for reasons only it knows, interviewed Nick Saban and let him plead his case for the Crimson Tide. His lame excuse was the selection committee should consider who is playing the best football right now and not win-loss records.

First, Alabama didn’t play Saturday, so no one knows how good they are playing right now. And if the roles were reversed, Saban would have been arguing that wins and losses count the most.

Most of the nation is weary of Alabama, and for good reason.

The Tide have won six of the last 11 national championships, and they are always in the conversation for a national championship. This season, though, Alabama finished tied with LSU for the SEC West title and lost the tie-breaker to the Tigers to see who would lose to Georgia.

As everyone knows, the Horned Frogs’ only loss of the season was on Saturday by a field goal in overtime to Kansas State, a very solid football team. Ohio State’s only loss was to No. 2 Michigan.

So the selection committee did the right thing, and its top four were the same as The Associated Press, coaches and FWAA polls.

Let the debate begin which is the best football conference in the country now that the Big Ten finally got half the playoff berths, and Michigan has made the playoffs for two consecutive years. The debate will end Jan. 9 when a national champion is crowned, or sooner if the Buckeyes and the Wolverines play each other in the finale.

But for almost two years the road to the championship has run through Georgia, which is riding a 14-game win streak.

The Bulldogs advanced to that game by beating Michigan 34-11. The Wolverines’ only touchdown came with less than five minutes to play.

As for those who feel Alabama was slighted, it is true the Tide had a tougher schedule than TCU, and their losses were to No. 6 Tennessee and No. 17 LSU.

However, the Horned Frogs took care of business, and when Tim Brando, one of Fox’s leading announcers, spoke to the Little Rock Touchdown Club this fall he warned everyone that TCU was for real.

The Horned Frogs outscored their opponents by an average of more than two touchdowns.

The bet here is Alabama will be back and sooner than later.

It is still going to the Sugar Bowl, and it has the opportunity to make another case for why they should have been invited because they are playing Kansas State.

Maybe, in a way, Alabama not being in the playoff is good for college football. For sure, most of the country were tired of the Crimson Tide.