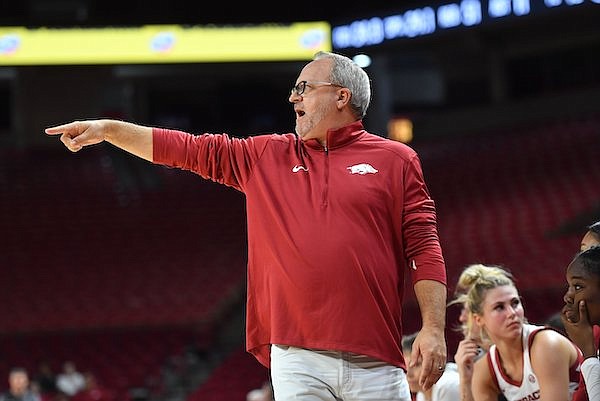 FAYETTEVILLE— For the first time since March 15, 2021, Arkansas' women's basketball team is ranked in The Associated Press Top 25.

Arkansas (10-0) debuted at No. 21 in the latest poll released Monday. The Razorbacks’ early season surge is highlighted by a dominant 69-53 victory over current No. 24 Kansas State in the U.S. Virgin Islands.

Coach Mike Neighbors’ team was on the cusp of being ranked last week, receiving the third most votes among teams not in the poll.

“There’s just some inertia to it that you can’t overcome,” Neighbors said after not being ranked last week. “There’s teams that get ranked so high to start the year and then they don’t lose, so there’s really nowhere to go early on.”

His squad got the shakeup it needed to enter the poll. A handful of lower-ranked teams lost, helping Arkansas climb seven spots after defeating both Troy and Oral Roberts by double digits.

Prior to Monday, the women’s basketball program was the only sport on campus that hadn’t been ranked in 2022.

“We didn’t want to be the team that stops that streak,” Neighbors said.

The win over Troy came against Razorbacks great Chelsea Dungee, who is in her first year as an assistant coach for the Trojans. Before Monday, she was in an Arkansas uniform the last time it was ranked.

After Troy’s 17-point loss, Dungee was quick to say she thinks Neighbors has a special team this season.

“They have a really good team,” Dungee said. “They’ve played some good teams and I think they’re still going up. They are nowhere near their potential, even though they’re great right now.”

Three different Razorbacks teams have now been ranked under Neighbors, who is in his sixth season as head coach. His 2019-20 and 2020-21 teams were both mainstays in the poll.

Arkansas is one of 15 remaining unbeaten Division I teams, tied with Virginia and Stanford for the nation’s most wins.

The Razorbacks return to Bud Walton Arena on Thursday to face Lamar at 7 p.m.