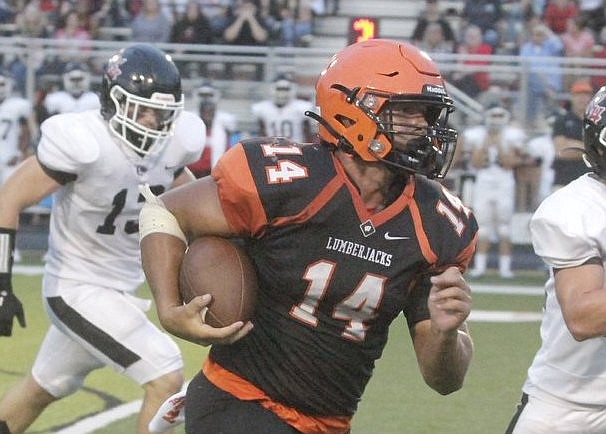 Arkansas football coach Sam Pittman gave Warren’s Maddox Lassiter an opportunity to be a Razorback and he committed on the spot.

Lassiter, 6-3, 232 pounds, visited Arkansas on Saturday and eventually made his way to Pittman’s office, where he learned of a preferred walk-on offer.

“Coach Pitt just called me and my family into his office and we talked for about 30 minutes, and at the end of the meeting, I was pleased with his offer to be a PWO because I’ve always wanted to play for the Hogs,” Lassiter said. “I saw the chance to be one and that’s what I wanted to do, so I did it.”

Prior to Pittman extending the offer, Lassiter let him know what he wanted during the visit.

“He just asked me what I was there for, and I just told him I wanted to be a Hog,” Lassiter said. “I was stoked because I’ve been working my butt off for five years now trying to fulfill my dream, and it was finally right in front of me.”

Lassiter chose the Razorbacks over scholarship offers from the University of Central Arkansas, Austin Peay and Ouachita Baptist University, and interest from Arkansas State, Louisiana-Monroe, Memphis and Army.

He was a Jack-of-all-trades for the Lumberjacks this season, passing for 2,221 yards and 23 touchdowns and rushing 142 times for 1,115 yards and 16 touchdowns. He recorded 161 tackles, 2 sacks, 5 quarterback hurries, 2 forced fumbles, 2 pass breakups and returned 2 interceptions for scores as a senior.

Arkansas is recruiting him as a tight end. Being able to focus on one position excites him.

“I’m ready to put everything into one position and just see how good I can do,” he said.

Lassiter felt at home during the visit and enjoyed the facilities and attending the Arkansas-San Jose State men's basketball game.

“Everyone was nice and had a lot of energy,” Lassiter said. “The facilities were really nice and organized, and the basketball game was really fun.”

He appreciates Razorbacks tight ends coach Dowell Loggains staying in contact and being up front with him.

“Oh, I love him. He’s never given up on me since the day he’s started recruiting me, and he’s going to shoot you straight,” Lassiter said.

Arkansas has extended at least three scholarship offers to transfers who officially entered the NCAA portal on Monday, the first day athletes could do so.

He played at Katy (Texas) Tompkins and was rated an ESPN 4-star prospect, the No. 6 defensive end and No. 42 overall prospect in the nation in the 2021 class.

He was a consensus 3-star recruit out of Metairie (La.) Archbishop Rummel in the 2020 class. Holmes played in 11 games this season as a sophomore and recorded 23 tackles and 9 pass breakups.

Jackson, 6-3, 198, played in 9 games, including 1 start this season as a junior and had 14 tackles, 1 tackle for a loss and 2 pass deflections. He also played on special teams.

Jackson played at Fort Scott (Kan.) Community College before signing with Alabama. He was ESPN’s top-rated junior college cornerback in the nation in 2019.