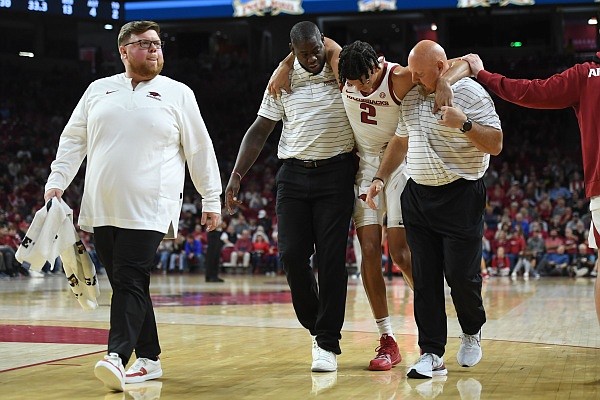 Arkansas forward Trevon Brazile (2) is helps off of the court Tuesday, Dec. 6, 2022, by recruiting coordinator Ronnie Brewer and strength coach Dave Richardson (right) as trainer Matt Townsend leads the way after injuring his leg during the first half of play in Bud Walton Arena in Fayetteville. Visit nwaonline.com/photo for the photo gallery.

FAYETTEVILLE — Ninth-ranked Arkansas will be without sophomore Trevon Brazile for the remainder of the 2022-23 season.

The Razorbacks announced Wednesday that Brazile suffered a torn ACL in the Razorbacks’ 65-58 victory over North Carolina-Greensboro on Tuesday. He will have surgery later this month, according to a release.

The injury occurred at the 7:30 mark of the first half after Brazile drove to his right from the three-point line. The 6-10 forward’s right leg bent awkwardly and he immediately collapsed to the floor.

Brazile returned to the team’s bench for the second half of the game, but he did not play after halftime.

A transfer from Missouri, Brazile was one of the Razorbacks’ main offensive pieces in the season’s early stages. He was averaging 13.3 points on 50% shooting and 6.5 rebounds ahead of Tuesday’s game.

Bleacher Report has projected Brazile as the No. 34 overall pick in the 2023 NBA Draft.