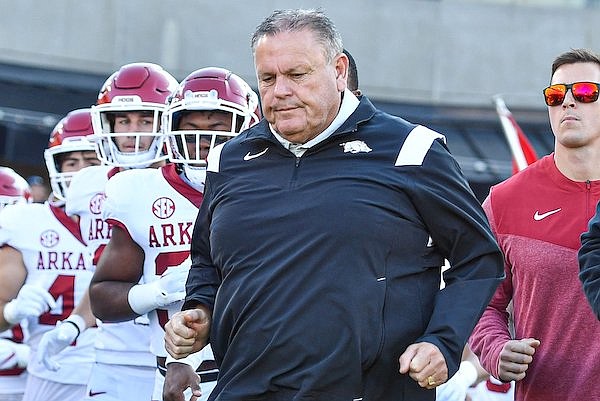 Arkansas coach Sam Pittman runs onto the field prior to a game against Missouri on Friday, Nov. 25, 2022, in Columbia, Mo.

Maybe it is too early to be making predictions for the Liberty Bowl, but it appears the Arkansas Razorbacks’ offense might need to be running on jet fuel against Kansas.

Linebacker Drew Sanders’ decision to not play in the bowl game and start preparing for the NFL Draft is a blow to the Razorbacks’ defense.

Sanders, who transferred from Alabama, was the leading tackler this season with 103. He also led the team in sacks with 9.5.

That means the Hogs are without their top two linebackers as Bumper Pool had to undergo hip surgery, and he has another one scheduled if he hasn’t already had it.

That’s two physical, mental and emotional leaders gone from a team that ranked 123rd defensively out of 131 teams. Arkansas gave up an average of 453 yards per game.

Oh, and defensive back Myles Slusher is transferring.

The Liberty Bowl doesn’t have a D in it and for a reason: Kansas ranked 121st defensively, allowing 451 yards per game.

Redshirt freshman linebacker Chris “Pooh” Paul has been filling in for Pool and seems to be getting better with each game.

Starting center Ricky Stromberg has said he won’t play in the bowl either to prepare for the NFL Draft.

What this Hogs team needs to do is declare it another senior day and refuse to let the remaining seniors leave on a losing note.

In the last Outback Bowl, Penn State had a couple of players opt to sit out to prepare for the NFL and that is just the tip of the iceberg.

That trend started about five years ago and it grows each year, and it is hurting the bowls — which don’t need anything else to go wrong.

When the College Football Playoff expands to 12 teams in 2024 — the same year it is predicted Texas and Oklahoma will join the SEC — the bowls will have to fight for relevance, but that said, 43 bowl games are too many.

Players opting out of bowl games is just a shadow on the postseason play.

It used to be the players looked forward to the bowls and all that went with it, including special gifts for all the players. But now that NIL money is around, they can buy their own presents.

Jimbo Fisher was never going to be fired by Texas A&M this season. But if he had, his approximately $85 million buyout was more than Texas’ and Oklahoma’s to leave the Big 12.

If that doesn’t illustrate how out of control coaching salaries have become then nothing will.

The Liberty Bowl parade pep rally will be Dec. 27 on famed Beale Street in Memphis.

No announcement of who the grand marshal is.

Jeff Long, who now lives in North Carolina, was previously the athletic director at Arkansas and Kansas.

No idea if he is pulling for one team over the other, doesn’t care or wishes they would both lose.

Going to Memphis may not seem quite as glorious as Tampa, Fla., but there are some advantages, such as it being drivable and affordable.

There is a lot to do, too, according to friends Jerry and Etta Webster, who visit their daughter there regularly.

To name a few: Sun Studios, Graceland (if you don’t know who Elvis is, skip this one), National Civil Rights Museum in the Lorraine Hotel where Martin Luther King was shot, the Peabody Duck parade, Stax Museum of American Soul Music and, of course, Beale Street, home of the blues.

There are dozens and dozens of great restaurants and not all of them serve barbecue, which the city is famous for.

It is a good bowl for the Razorbacks and their fans.