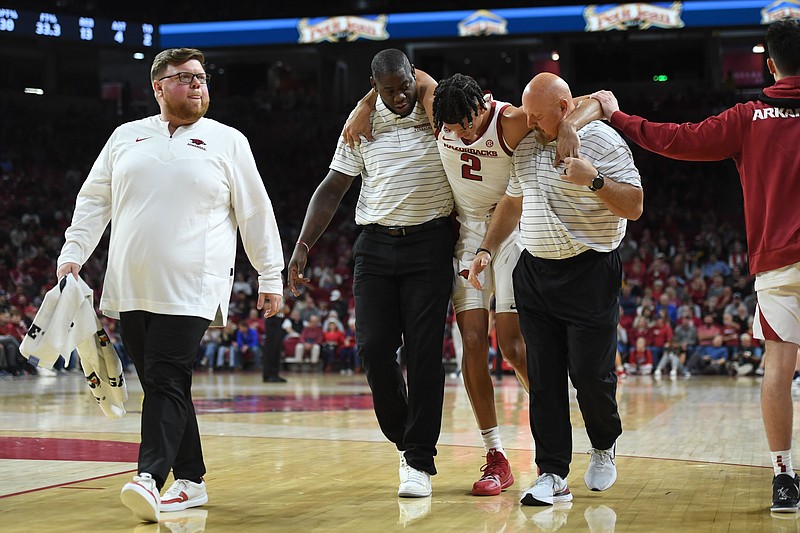 Arkansas forward Trevon Brazile (2) is helped off of the court Tuesday, Dec. 6, 2022, by recruiting coordinator Ronnie Brewer and strength coach Dave Richardson (right), as trainer Matt Townsend leads the way after Brazile injured his leg during the first half of play in Bud Walton Arena in Fayetteville.

Brazile collapsed to the floor and held his right knee after he took an awkward step on a drive to the basket with just more than seven minutes remaining in the first half. He returned to the sideline after halftime but did not play in the second half.

Tom Hart, a play-by-play broadcaster on the SEC Network telecast of the game, said Brazile’s injury is not expected to be long term, but Arkansas coach Eric Musselman said later he will not know the severity of Brazile’s injury until Wednesday.

“There won't be any update until he gets with the medical people tomorrow, and they're able to MRI it or X-ray it,” Musselman said.

Brazile has been Arkansas’ top bench player this season and is averaging 11.8 points and 6.0 rebounds in 27 minutes per game. Those stats were significantly impacted by his early exit Tuesday when he went scoreless and had two rebounds in nine minutes.

Brazile was the Razorbacks’ leading scorer in the previous game, when he had 23 points in just less than 30 minutes during a 99-58 victory over San Jose State.

There appeared to be a lid on both rims inside Bud Walton Arena for the first half Tuesday night. Arkansas and UNC-Greensboro endured a five-minute stretch early in the half in which both teams failed to score.

Arkansas scored a season-low 21 points on 9 of 30 from the field. The Razorbacks scored on 3 of their first 8 attempts before missing 12 consecutive shots.

According to HogStats.com, the 21 first-half points were the second fewest by a ranked Arkansas team in the shot-clock era, just ahead of 19 points scored against Centenary in December 1997.

The Spartans were not much better as they put up just 26 points in the first half.

The Razorbacks struggled from long range and missed all eight attempts beyond the arc in the first half. Arkansas trailed by as many as 12 points before halftime.

Arkansas scored on its first shot of the second half – a three-pointer courtesy of Nick Smith.

Smith, a 5-star recruit, had a break-out performance that could not have come at a better time for an Arkansas team desperate for offensive production.

After returning from a preseason knee injury, Smith had been limited to 30 combined minutes in Arkansas’ previous two games against Troy and San Jose State. He was let loose against the Spartans and led all players in points (22) and minutes (39).

He continually attacked the defense and showed his adeptness for drawing contact. The freshman converted 9 of 11 free-throw attempts.

Makhi Mitchell nearly had his first double-double of the season on Nov. 28 against Troy, but the 10th rebound slipped out of his grasp in the final moments. He admitted that he was irked about not securing the board during his post-game news conference.

It took just two games to make up for it. Arkansas relied on Mitchell to clean the glass in the absence of its leading rebounder Brazile, and he answered the call with a season-high 14 boards to go with 13 points.

Since the Razorbacks returned from the Maui Invitational, Mitchell has racked up 35 points, 27 rebounds and 8 blocks in victories over Troy, San Jose State and UNC-Greensboro.

Arkansas improved to 32-0 in home non-conference games under Musselman, who is in his fourth season.