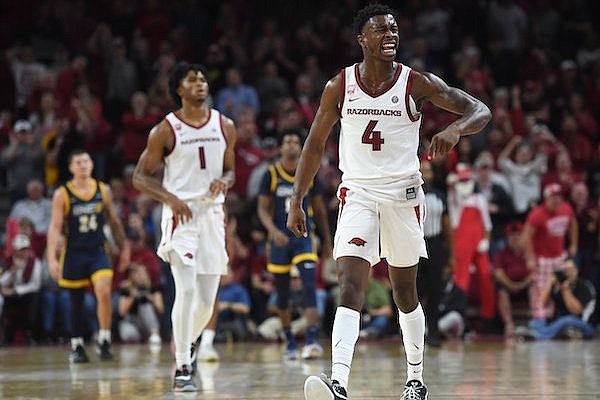 Arkansas guard Davonte Davis (4) celebrates Tuesday, Dec. 6, 2022, during the second half of the Razorbacks' 65-58 win over UNC-Greensboro in Bud Walton Arena in Fayetteville.

But the No. 9 Razorbacks were ahead when it mattered most — at the end.

Arkansas rallied to win 65-58 after the Spartans led for 29 minutes, 6 seconds.

It was the final of 11 lead changes.

“Basically, we tried to turn them over,” said Smith, who led Arkansas with 22 points. “We tried to get some stops. Tried to get buckets, and that’s what we did.”

“All the credit goes to UNCG from a defensive standpoint, but we had a lot of guys just not play as well as they have been,” Arkansas Coach Eric Musselman said. “And they all kind of did it in one game. Not all, but many.

“But I thought down the stretch our guys played composed.”

Arkansas sophomore forward Trevon Brazile was injured with 7:30 left in the first half when he was driving to the basket, his right knee buckled and he collapsed on the court.

Brazile didn’t play the rest of the game, though he watched the second half from the bench.

Musselman said he wouldn’t have an update on Brazile’s health status until after he’s been examined by doctors today.

“I was kind of scared, honestly, just because of how he went down, and that’s just my brother,” said Arkansas senior center Makhi Mitchell, who had 13 points, 14 rebounds and 4 blocked shots. “We just stayed the course. Next man up.”

“We had Devo guarding some [power forwards] and we played him out of position just because we’re kind of doing stuff on the fly with T.B. getting injured,” Musselman said. “But I thought his energy was phenomenal, crashing the glass at his size. Getting 10 boards was awesome.”

Arkansas freshman guard Anthony Black, who had 11 points, 5 rebounds and 2 assists, hit a three-pointer with 3:09 left to put the Razorbacks ahead 54-49.

“We know none of our players are backing down from the big games and the big moments,” Black said on the Razorbacks’ postgame radio show. “We tried to share the love and share the ball and just trust in each other to make plays for one another and ourselves.”

The Spartans (4-6) came close to pulling the upset because they hit 9 of 28 three-pointers.

The Razorbacks hit 26 of 33 free throws, including 23 of 27 in the second half when they were more aggressive attacking the basket.

Smith played 39 minutes in his third game back from a knee injury and scored 16 points in the second half.

Arkansas trailed by as many as 12 points in the first half before pulling within 26-21 at halftime.

It was the second lowest-scoring first half by a ranked Arkansas team during the shot clock era, according to HogStats.com. The then-No. 13 Razorbacks beat Centenary 61-43 on Dec. 18, 1997, in Walton Arena after trailing 24-19 at halftime.

On Tuesday night Arkansas went an 8:12 span in the first half without scoring in which the Razorbacks missed 12 consecutive shots before Davis hit a jumper at the 6:38 mark to cut UNCG’s lead to 16-8.

The offensive struggles in the first half came after the Razorbacks shot 75.9% (22 of 29) in the second half in their 99-58 victory over San Jose State on Saturday.

“Maybe we didn’t handle the great second half that we had against San Jose State and put that behind us and understand how hard it is to go and earn every win,” Musselman said. “It’s part of our growth with 11 new players.

“But certainly down the stretch we played well enough to win the basketball game.”