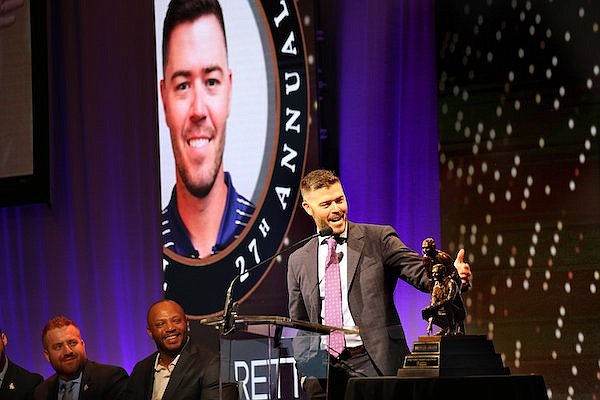 Tucked in the front corner of the lobby of Little Rock’s Capital Hotel, TCU offensive coordinator Garrett Riley popped on a headset for his radio spot with KABZ-FM, The Buzz’s, Ray Tucker.

To his left sat Michigan defensive coordinator Jesse Minter, and most of the time, nothing about that scene would seem strange. The pair of 30-something assistants coach in different conferences — their universities separated by nearly 1,000 miles — but both were in Arkansas as finalists for the Frank Broyles Award.

Except, come Dec. 31, Riley and Minter will go head-to-head in the College Football Playoff semifinals when the former’s No. 3 Horned Frogs play the latter’s second-ranked Wolverines in the Fiesta Bowl.

There could have easily been tension.

But sharing that moment with the guy who he’s going to spend the next three-plus weeks trying his hardest to beat made it that much more special.

“This coaching fraternity is its own world,” Riley told the Arkansas Democrat-Gazette on Monday. “To be able to be around other elite guys … that’s just a humbling experience.”

Bryant defensive coordinator Quad Sanders, who helped the Hornets win their fifth Class 7A state championship last weekend, was one of 14 coaches honored with the High School Broyles Award.

Broyles Award founder David Bazzel — who launched the award in 1996 as a tribute to former Arkansas Coach Frank Broyles’ success in developing football coaches — would not disclose the final tally among college coaches, but he noted that first-place votes were spread across all five finalists, making it one of the most competitive votes in the award’s history.

“You don’t get here if you don’t have team success, we all know that,” Riley said Monday ahead of Tuesday’s announcement. “There’s probably a lot of other guys on our staff alone that could have been here today, and I truly believe that. … [It’s] a special recognition for our whole team and our program.”

Following Coach Sonny Dykes across the Dallas-Fort Worth Metroplex from SMU to TCU last offseason, Riley helped ignite a turnaround with the Horned Frogs that may well continue into 2023 if they are able to play for their first national title since 1938.

TCU is one of only two programs in the nation averaging at least 285 passing and 200 rushing yards per game with at least 20 touchdowns both on the ground and through the air. The Horned Frogs also rank ninth in yards per play (6.84), sixth in scoring offense (40.3 points per game) and lead the nation with 19 plays from scrimmage of 50 or more yards.

As much as anyone, Riley attributed those whopping numbers to quarterback Max Duggan, who was named a Heisman Trophy finalist Monday night.

“I haven’t really coached a guy like him and I know those guys don’t come around too often — that’s why they’re special,” Riley said of Duggan. “The way he lays it on the line all the time, I think that’s why people love watching him. He’s just such a selfless person, so I’m very, very fortunate and lucky.”

Until his one-hour flight from Fort Worth to Little Rock on Monday afternoon, Riley had little time to decompress.

He went right from Saturday’s Big 12 Championship Game — in which TCU’s unbeaten season came to an end with a 31-28 Kansas State — into recruiting, with the high school contact period underway and the transfer portal officially opening Monday morning.

The younger brother of USC Coach Lincoln Riley, Riley has spent the last 14 years on a football whirlwind tour. He started as a walk-on at Texas Tech in 2008 under Coach Mike Leach, began as a college assistant four years later and has never spent more than three seasons with any program, jumping from East Carolina to Kansas to Appalachian State to SMU and now, TCU.

Riley’s season isn’t done. He’d love to game plan twice more — once for Minter and Michigan, then again for either Georgia or Ohio State. But he wanted to step back and soak in his 24 hours in Little Rock.

“It’s definitely a surreal moment for me. This is such a prestigious deal in our industry,” Riley said. “It’s such a special deal to see our kids transition the way they have. That’s hard for 18-to-20-year-olds to go through this wholesale change.

“We have kids that are mature enough to do that and believe in us enough to allow us to kind of come into their life and develop them. It’ll be an experience that I’ll never forget and [will be] very valuable moving forward.”