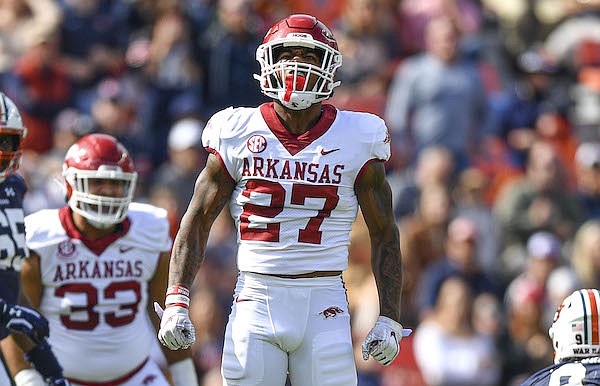 Arkansas linebacker Chris Paul Jr. (27) celebrates his tackle of Auburn quarterback Robby Ashford (9), Saturday, Oct. 29, 2022, during the first quarter of the Razorbacks’ 41-27 win over the Tigers at Jordan-Hare Stadium in Auburn, Ala. Visit nwaonline.com/221030Daily/ for the photo gallery.

FAYETTEVILLE — A trio of Razorbacks were named to the SEC All-Freshman team released Thursday by the league office.

Arkansas landed its highest number of players on the team since 2020, when safety Jalen Catalon, offensive lineman Brady Latham and tight end Hudson Henry all made the unit.

Paul is the first UA linebacker on the All-Freshman team since De’Jon Harris in 2016. The Cordele, Ga., native ranked sixth on the team with 50 tackles, including 8 tackles for loss and 4 sacks, while also notching 1 forced fumble and 1 fumble recovery.

He was named a freshman All-American by both The Athletic and College Football News earlier this week.

Paul is targeted for his first career start in the AutoZone Liberty Bowl on Dec. 28 against Kansas with Bumper Pool out due to hip surgery and Drew Sanders having declared for the NFL Draft.

McAdoo, a wide receiver signee, made the team despite playing cornerback in only four games – three starts. The 6-2, 192-pounder from Clarendon has 21 tackles, 1 sack, 5 pass breakups and 1 interception.

In his first significant playing time against Liberty, McAdoo blocked a punt for a safety, notched an interception and recorded two pass breakups

Stein is the first long snapper at Arkansas to earn all-freshman honors from the SEC. The Cambridge, Wisc., native started the first 11 games before missing the regular season finale at Missouri due to a finger injury.

His status for the Liberty Bowl has not been updated.