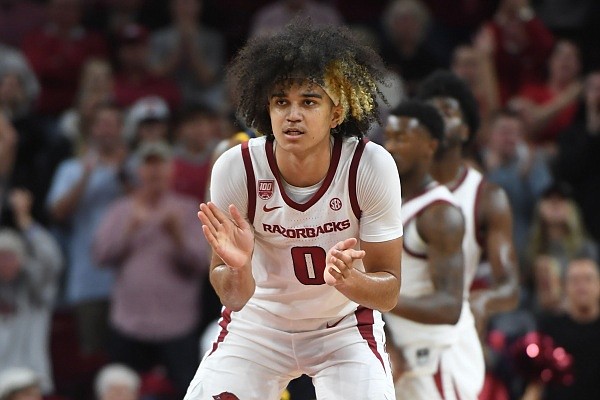 Anthony Black is shown during Arkansas' game against UNC-Greensboro on Tuesday, Dec. 6, 2022, in Bud Walton Arena in Fayetteville.

FAYETTEVILLE — Moments after Trevon Brazile went down with a knee injury Tuesday in Arkansas’ win over North-Carolina Greensboro, Makhi Mitchell stood nearby with both hands on the top of his head.

In his interview following the game, Mitchell said the entire sequence of events scared him. He hurt for Brazile, one of the Razorbacks’ top two-way players and a budding star in the SEC, and his heart dropped.

Two days later, Anthony Black, Arkansas’ talented 6-7 guard, said some of the players on the roster were “pretty emotional” when they learned of Brazile’s ACL tear and that he would miss the rest of the 2022-23 season.

The Razorbacks, ranked ninth in this week's Associated Press Top 25, now must move forward through a personnel hit and show they remain among the nation’s best.

“Any time you lose a good player like that, it sucks and it hurts, because that’s like our brother,” Black said Thursday. “We still (instill) in our teammates that it’s next man up. I think we can still do what we’re trying to do.

“I think we’re still a top-10 team as long as we play up to how we can play. Now we’re just going to go a lot harder for TB since he can’t play.”

More from WholeHogSports: Musselman, Black preview Razorbacks' game against Oklahoma on Saturday | Latest episode of the Basketball Podcast of Mid-America

Black said the mark of a good team is its ability to push on and improve regardless of the scenario.

“It’s life,” he added of having a complete roster for less than three halves of game time this season. “Stuff doesn’t always go your way. We’ve just been figuring out ways to adjust to it. Although not having Nick (Smith) sucked and then Devo (Davis), we understood what he had to do, but it still was hard not having him.

Since further evaluation revealed the ligament tear, Musselman said Brazile is doing well. The fourth-year Arkansas coach’s chief concern is and will continue to be ensuring the 6-10 sophomore is in the right mental frame.

Musselman added that he, Brazile, Brazile’s father and head athletic trainer Matt Townsend met Thursday to discuss timelines in regards to surgery. Brazile will meet with a surgeon Friday to finalize a date for the operation.

He will not travel with the team to Tulsa for Saturday's game against Oklahoma.

“The biggest thing is just trying to support TB,” Musselman said. “We want him to be around the team as much as he possibly can be. Like I said, he was already in this morning getting with our trainer. They need the swelling to go down and strengthen the quad a little bit, get range of motion, and then at that point, after that, is when the surgery will happen.

“It’s obviously a huge blow to us, but these things happen in athletics. We’ve got to figure out how we move forward. It’s a shame this ball club will really have only one game together that it was fully healthy. That’s not going to change. That’s just going to be a fact for the entire year.”

Losing a player who Musselman considered one of the five best in the SEC will be a challenge to overcome. Arkansas has 27.0 minutes per game and plenty of production to replace.

“Somebody’s going to get a new opportunity, or a couple guys are, and then we just have to hope that guys play well,” Musselman said. “Who we are Saturday, it’s a new ball club. TB was a leader for us way back when we went and played the four games overseas.

“He’s been a go-to player and a guy that we’ve relied on offensively, defensively, blocking shots, versatility.”

Black, an athletic and rangy guard, said he can assist the Razorbacks in Brazile’s absence by being more active on the glass. He is tied for second on the team with Mitchell at 5.4 rebounds per game.

Black also believes freshman wing Jordan Walsh can give Arkansas a boost on both ends.

“I think we need him to step up a lot, play a lot better than he’s been playing,” he said. “He plays really hard, and there’s been a lot of games this year where he’s really helped us out a lot. I just think we need him to be really engaged and play with a lot of energy, because when he does that, he does good things for our team and we just roll smoother, especially on the defensive end.

“He can get us a couple of stops in a row, a couple run-out dunks. And he can also make shots, get to the rim. We just need him to have a lot of energy and keep playing hard.”