Mitchell making a difference for Hogs 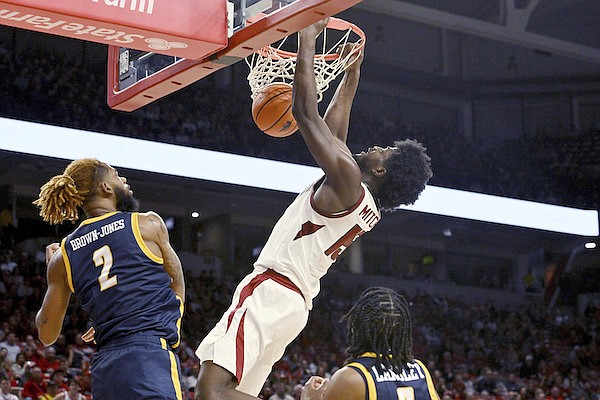 FAYETTEVILLE — Whether hitting shots or blocking them, making free throws or grabbing rebounds and steals, University of Arkansas center Makhi Mitchell had his fingerprints all over the Razorbacks’ 65-58 victory against North Carolina-Greensboro on Tuesday night.

“I thought Makhi was really effective having a double-double,” Arkansas Coach Eric Musselman said. “I thought he was a game-changer.”

Musselman said Mitchell’s interior defense was a key to the No. 9 Razorbacks limiting the Spartans to 24 points in the paint.

“He gets a ton of the credit for that,” Musselman said. “For sure, the paint protection, the rim protection mainly, Makhi was phenomenal.”

For the season Mitchell has 11 blocked shots and nine steals.

According to KenPom.com advanced statistics, Mitchell has a team-high 7.2% block rate, which measures opponents’ two-point attempts a player blocks when he’s on the court. That rate is seventh among SEC players.

Mitchell’s 3.8% steal rate is third-best among SEC players 6-9 or taller, according to KenPom.com.

Arkansas’ rate of forcing turnovers is 18.6% on opponent possessions when Mitchell plays, according to CBB Analytics, and 14.9% when he’s not on the court.

“Pretty solid,” Mitchell said of his overall performance on Tuesday night. “Just doing my job like Coach wanted me to.

“And then helping my teammates, obviously, when they slip up in coverage, and being there for them, getting blocked shots. That’s just what I do.”

Mitchell had his ninth career double-double, but first as a Razorback. He just missed a double-double earlier this season with 14 points and nine rebounds against Troy.

“Khi is one of our big pieces on the team,” said freshman guard Nick Smith, who led Arkansas with 22 points against UNCG. “He’s come up big for us ever since he got here.”

“I just think Makhi’s getting more comfortable,” Musselman said. “And he plays hard, he runs the floor hard.

“If you’re struggling, run the floor and get an easy layup. Fly in there and crash the offensive glass and get a put-back, and he’s doing that.”

It took Mitchell some time to find his way into the lineup after he averaged 1.5 points and 1.5 rebounds and hit 3 of 5 shots in Arkansas’ four-game exhibition tour in Europe in August. He sat out one game entirely.

As Mitchell got more practices with a new staff, he gradually progressed and earned playing time with his showing in the Red-White scrimmage and exhibition games.

“Oh man, the intensity is crazy,” Mitchell said Monday night when he appeared on Musselman’s radio show along with his twin brother, Makhel. “I kind of liked it, I’m not going to lie, just because I’m intense myself and I like to go hard.

“I bought in kind of early. I was feeling it.”

The Mitchell twins, who are from Washington, D.C., previously played together at Maryland and Rhode Island before transferring to Arkansas.

Makhi Mitchell said Musselman was accepting of them wanting to continue to be teammates when they went into the transfer portal.

“Coach respected our decision and he said he’d take both of us,” Mitchell said on the radio show.

Makhel Mitchell is averaging 3.4 points and 2.6 rebounds in 8.4 minutes in 7 games this season, with 6 blocked shots and 4 steals. He had 12 points, 6 rebounds, 3 assists and 2 blocked shots against Louisville.

“They lift everybody up every day in practice, and laugh and joke,” Smith said of the twins. “I feel like that’s big for us as a team.”

Musselman said that coming to Arkansas was an adjustment for the twins.

“With Makhi and Makhel, our culture is much different than maybe what they’d been used to, and it took time,” Musselman said. “It took the whole summer, and then it took September, and it took October, and slowly but surely, they’re understanding expectations in practice and expectations when you check in the game.

“They’ve done a great job, and they’re big bodies that are talented.”

Musselman said on his radio show that during the recruiting process, Arkansas’ coaching staff was impressed watching the twins in games last season.

“Their film, their body of work on video was the most important thing,” Musselman said. “Both guys for their size are really agile. They’re both really good shot-blockers.”

Musselman said Makhi Mitchell has a bit more perimeter skills than his brother, who is more physical.

“They’re both incredible practice players, and they both have great upside,” Musselman said. “They’re going to continue to get better and better. I think they’ve improved in their short time here with just little detail-type things.

“They have a great spirit about themselves. Their teammates really, really like them both on the floor and off the floor.

“They’re energy givers and they’re fun to be around. The one thing for sure is they’re both really tough.”