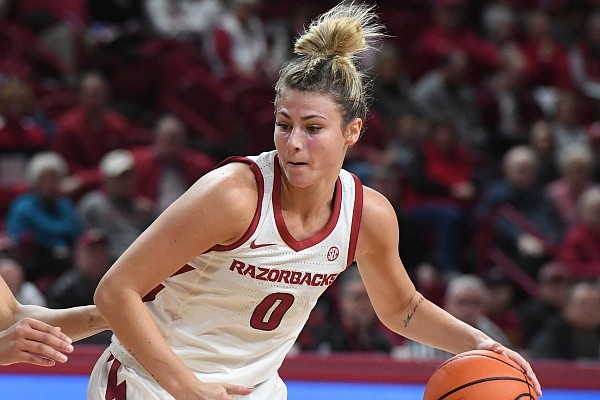 Arkansas' Saylor Poffenbarger tries to get past Oral Roberts' Tirzah Moore on Sunday, Dec. 4, 2022, at Bud Walton Arena in Fayetteville.

FAYETTEVILLE — The 21st-ranked University of Arkansas women’s basketball team overcame a sloppy start but held Lamar to 17 second-half points to survive a scare, winning 63-50 on Thursday night in Walton Arena.

Arkansas (11-0) closed the game on a 9-0 run, and its 13-point final advantage was its largest of the game. The Razorbacks won despite 20 turnovers and 45% shooting at the free-throw line.

“It took our best effort in the second half to overcome a really spirited Lamar team,” Arkansas Coach Mike Neighbors said. “I thought they were confident. I thought they were prepared, and in the first half, they dominated us. Every phase of the game they were dominant.

“I think our kids hit the reset button at halftime, and then we were dominant in the second half. Proud of our group for being able to do that. We’ve got to work on playing closer to 40 minutes, but really pleased with the overall effort.”

Graduate transfer Chrissy Carr hit crucial shots down the stretch for Arkansas. Three of her game-high four three pointers came in the second half. She led the Razorbacks with 18 points.

“Probably the difference in the game,” Neighbors said of Carr’s timely shots. “Honestly, it seemed like it stretched leads and it kept leads. It was huge. She’s been more and more comfortable every single game, she’s got a really good approach and the ball’s finding her at the right times.”

Lamar (4-4) held a lead for 10:24 and responded for much of the game each time Arkansas made a push. The Razorbacks finally wore down the Cardinals in the fourth quarter, allowing just two field goals.

Carr credited the team’s mentality to close the game as a key component to gaining an 11th straight win.

Arkansas trailed 33-31 at halftime, in large part due to 12 turnovers, six of which were unforced. It was the first time this season the Razorbacks had trailed at intermission.

“Sloppy is a really nice word,” Neighbors said. “It was sloppy and careless — a word that concerns me more. The sloppiness we can fix, but some carelessness we can’t.”

After the Cardinals’ Akasha Davis scored a three-point play to end the second quarter, Neighbors challenged his team at intermission to turn things around.

“Crazy things happen this time of the year,” Neighbors said. “They just do. You get around finals, there’s a lot of stuff going on, and it’s a challenge to stay laser-sharp focused. I told our kids at halftime, I said, ‘Listen, we need to play well, you know it. I’m not going stand up here and point out every single thing, but here’s what we have got to do to win the second half. After that, we will never talk about this game again.’”

Neighbors’ team hung its hat on defense in the game’s final half, limiting the Cardinals to 17% shooting.

Saylor Poffenbarger was instrumental in Arkansas’ second-half surge. She posted her second-straight double-double, scoring 17 points to go along with 12 rebounds. The redshirt-freshman drilled a three-pointer with 1:18 left in the game to give Arkansas its first double-digit lead.

Poffenbarger played a team-high 38 minutes. and the Razorbacks outscored Lamar by 19 points with her on the court.

“If you leave her out there for [38] minutes, she’s going to get 12 rebounds,” Neighbors said. “Because she goes after every single one of ‘em, and she takes it personal when she doesn’t get it. Her shot’s really starting to look more like it does in practice, and I think you see her confidence growing game after game.”

Arkansas struggled from the free-throw line, finishing 14 of 31. Neighbors said his team can’t win games later in the year with those numbers.

“It’s not like us to have 17 missed free throws and 20 turnovers,” he said. “That will cost us games down the stretch, and we will keep pointing that out.”

Samara Spencer scored 17 points for the Razorbacks, going 5 of 10 from the floor. Sophomore Jersey Wolfenbarger started in place of Makayla Daniels, who is dealing with a day-to-day foot injury.