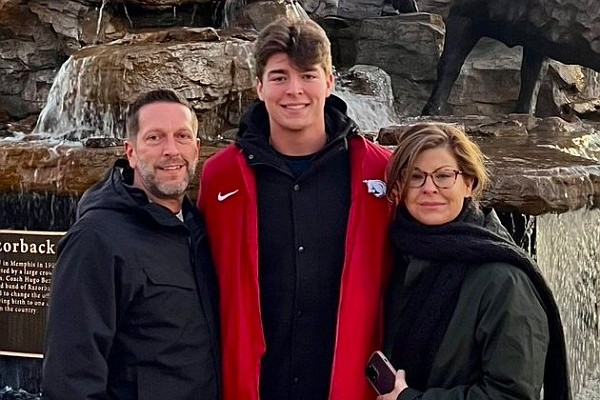 Arkansas baseball commit Hunter Dietz with his parents during his official visit.

Dietz and his parents officially visited the Razorbacks during the Arkansas-Ole Miss football game weekend in November.

“When I went on my visit, I was blown away by the facilities, campus and the atmosphere of Fayetteville,” Dietz said. “I also really liked the coaching staff and the care they seem to have for the game and their players.”

The Razorbacks have the top-rated class nationally with 13 of 20 commitments in Perfect Game’s top 100, compared to seven for Vanderbilt and UCLA, whose classes come in at No. 2 and No. 3 nationally.

According to the Perfect Game database, the 13 pledges in the top 100 are an all-time high. Florida had the next highest with nine in 2011.

Dietz, 6-6, 230 pounds, of Trinity (Fla.) Calvary Christian, also officially visited Ole Miss and was being recruited by about 20 other programs. During some summer showcases, he had 44 strikeouts in more than 30 innings.

Dietz got a dose of a cold November night while attending the Razorbacks' football game, but he came prepared. It was 34 degrees at the start of the game and 27 degrees at start of the fourth quarter.

“It was really cold out and right before Thanksgiving break and there was still a ton of people there,” he said. “I wore like five layers.”