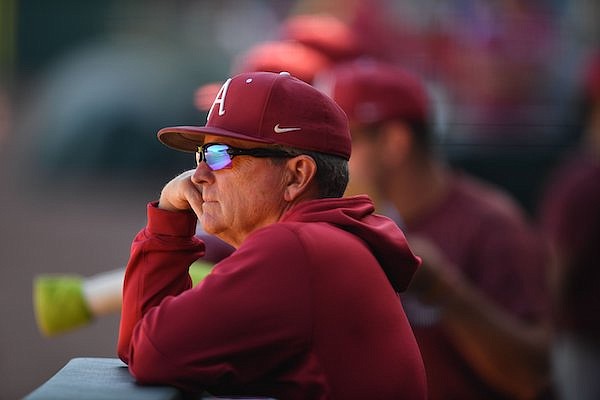 FAYETTEVILLE — Arkansas is ranked seventh by Collegiate Baseball Newspaper in the first poll of the 2023 preseason.

The Razorbacks trail four other SEC teams in the rankings — LSU (1), Florida (2), Texas A&M (3) and Tennessee (4). Third-ranked Stanford and sixth-ranked Louisville are also ranked ahead of Arkansas.

Only 19 points separate the Razorbacks and top-ranked LSU, indicating parity among the teams ranked near the top of the poll.

Arkansas finished 46-21 last season and came within one victory of playing for a national championship. The Razorbacks’ season ended with a 2-0 loss to Ole Miss in a national semifinal at the College World Series in Omaha, Neb.

Seven position starters are gone from last year’s team, but Arkansas returns six pitchers who recorded innings in Omaha, including three pitchers who started games in the postseason — right-handers Will McEntire and Jaxon Wiggins, and left-hander Hagen Smith.

Smith was a Freshman All-American last season, as was the Razorbacks’ primary closer, right-hander Brady Tygart.

In the field Arkansas returns two starters who will be manning different positions this season — Brady Slavens at first base and Peyton Stovall at second. The team’s 44-man fall roster included 28 newcomers, including 16 transfers from other Division I programs or junior colleges.

The Razorbacks are scheduled to play 21 games against nine teams that are ranked in the top 25 of the Collegiate Baseball poll, including SEC weekend series against LSU, Texas A&M, Tennessee, Vanderbilt (9), Mississippi State (22) and Ole Miss (24).

Arkansas is also scheduled to play three of the poll’s other top-25 teams — Oklahoma State (12), TCU (15) and Texas (25) — during the opening weekend of the regular season at the College Baseball Showdown in Arlington, Texas.

The Collegiate Baseball poll is one of six major polls in the sport. The USA Today Coaches Poll is the poll of record for the Arkansas Democrat-Gazette and is not expected to be released until late January or early February.

Arkansas is scheduled to begin preseason team practice Jan. 27. The Razorbacks’ first game is scheduled for Feb. 17 against Texas at Globe Life Field in Arlington.