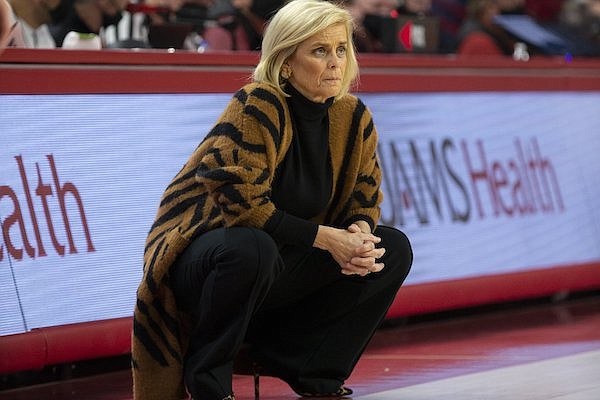 LSU coach Kim Mulkey is shown during a game against Arkansas on Thursday, Jan. 27, 2022, in Fayetteville.

FAYETTEVILLE — The 24th-ranked University of Arkansas women’s basketball team opens SEC play with a top-25 clash against No. 9 LSU at 6 p.m. today at Walton Arena.

LSU (12-0) has dominated its early-season schedule, leading the nation with a 44-point scoring margin. However, the Tigers have yet to play a ranked opponent and have the SEC’s weakest strength of schedule, according to Massey Ratings.

When asked if today’s game will be an indicator of where her team is at, LSU Coach Kim Mulkey didn’t mix any words.

“Absolutely,” Mulkey said. “Arkansas is a very good basketball team. Arkansas is well-coached. They run a system that’s hard to defend. Anytime you go on the road and play a well-coached team and a talented team, it’s a challenge.”

Arkansas (13-2), meanwhile, played the maximum allotted non-conference games and had games against three ranked foes. Massey rates the Razorbacks as having played the third-toughest schedule in the SEC thus far.

Arkansas Coach Mike Neighbors said he hopes his battle-tested team looks at the LSU game as one piece of a larger puzzle.

“I think if you place any more importance on it than any of the other 15, then you’re out of alignment with what you’re telling them,” Neighbors said. “They’re all worth one. You don’t get a bonus point for beating somebody at home or somebody that’s ranked. It really doesn’t matter — that win column, there’s not any room in that thing for pictures.”

The Razorbacks began the year winning 13 straight games but dropped two tight contests to Oregon and South Florida at the San Diego Invitational last week. Learning from those experiences while having a forward focus is something Neighbors said will be important in conference play.

“I want them to use the past, but not dwell on it too much,” Neighbors said. “I think if you get caught up in that, you can really hamstring yourself a little bit. I do think it’s important they know we have a formula, but it’s the execution of it that’s the hard part.”

Through 15 games, Neighbors said he thinks his team has learned its success is dependent on a group effort.

“I think we really identified our roles,” he said. “I think we know what each player can best do for the team, and I think they’ve really settled into those things.”

It will take a collective defensive effort to stop an electric LSU team that leads the nation scoring 94.8 points per game while boasting the nation’s third-best field-goal percentage (51.8%).

In particular, the Razorbacks will have their hands full containing Tigers sophomore forward Angel Reese, who averages 24.6 points and 14.7 rebounds per game. She leads the SEC with two player of the week selections this season.

“Stopping her is not even in the game plan, it is making her work for every point that she’s gotten,” Neighbors said of defending Reese. “There’s not much you can do once she gets the ball, so your defense has to be good prior to the catch.”

“For her, a lot of times a missed shot is the best offense they can run,” Neighbors said. “She is relentless in her pursuit. She assumes every shot is missed, and she assumes every offensive rebound is hers.”

It hasn’t just been Reese, either. LSU has been relentless on the glass this season, owning a nation-best 23.4 rebound margin.

Arkansas’ backcourt tandem of Samara Spencer (16.3 ppg) and Makayla Daniels (14.1 ppg) was one of the nation’s best through non-conference play. Mulkey had high praise for the duo, in particular Spencer, who is the fifth-leading scorer in the SEC.

“She’s not the only thing they have,” Mulkey said of Spencer. “And I can tell you that child’s good. And you know, Daniels is good. Those are two of the quickest, finest players in the SEC. But you know, those guys click and go because of other players as well. They spread the floor, they’ll shoot three, they love layups and free throws.”

Guarding the Razorbacks is a formidable challenge in the eyes of Mulkey.

“We’ve got our hands full defensively,” she said. “I think offensively we’ll be fine. It’s our defense. They’re hard to defend. They get downhill as quick as anybody that we played, and you’re just going to have to keep them away from the foul line as much as possible and keep them from hitting as many threes.”

The game, which airs nationally on ESPN2, is the first between two ranked SEC teams this season.

“It should be a game that people, if you love women’s basketball, will want to watch,” Mulkey said.