'21 Razorbacks were strikingly similar to team 46 years before 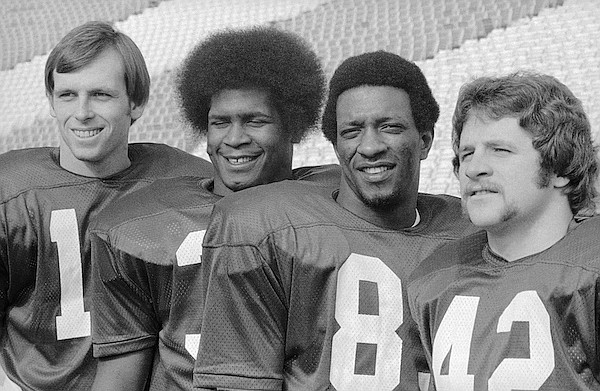 It hit me first while watching the Arkansas football team destroy Texas 40-21.

The 2021 offensive backfield — and style of play — resembled the 1975 Razorbacks who hammered Georgia in the Cotton Bowl.Quarterback KJ Jefferson with running backs Trelon Smith, Raheim “Rocket” Sanders, Dominque Johnson, AJ Green, Malik Hornsby and Treylon Burks gave the Hogs one of their most balanced groups of runners in school history.It just reminded so much of quarterback Scott Bull with Ike Forte, Jerry Eckwood, Roland Fuchs, Michael Forrest, Ben Cowins, Ron Calcagni and Mike Kirkland.The Hogs plundered the Longhorns' defense with 333 yards last season. Smith made 75, Jefferson 75, Green 67, Sanders 50, Johnson 44 and Hornsby 29.That Texas rushing total that was so celebrated is just slightly more than the 1975 Hogs averaged. At 320.3, they still have the school record.Late that night when looking at the individual rushing totals against Texas it hit me that at season’s end it would be worth a phone call to Bull, the leader of that veer option attack as run by offensive coordinator Bo Rein.Bull laughed at my first question: Did I see any resemblance, especially in the running styles of himself and Jefferson?“First, he is much bigger than I was in 1975,” Bull said. “What’s KJ, 245? I was 195 then.”Yes, but at 6-4, Bull was an imposing quarterback. He’d played both fullback and tight end earlier in his career when depth problems arose at both positions. He was a big quarterback for a time when weight lifting and nutritional supplements had not become the thing.This I remember clearly: Bull could and would run over you in the open field. I will never forget the way he plowed through tackles by Texas A&M’s vaunted defense, most notably linebackers Garth Ten Napel and Ed Simonini.“I promise if you study game tape of 1975, I don’t think you will see me run out of bounds,” Bull said. “KJ did run out of bounds, but not much. He definitely had the mindset of running through tackles in the open field.”That A&M defense was loaded with future NFL stars. It’s that game — a 31-6 decision in Little Rock — that landed the Hogs in the Cotton Bowl to finish a 9-2 regular season.

Arkansas whipped Georgia soundly in the second half of a 31-10 victory in the Cotton Bowl for victory No. 10 and a No. 7 final Associated Press ranking.That’s one win better than the 2021 Razorbacks, but the 24-10 victory over Penn State in the Outback Bowl on New Year's Day had a similar feel. The Hogs won the second half, 17-0.

Arkansas trailed 10-0 early in the second quarter of the 1976 Cotton Bowl, but won the second half 21-0 after gaining momentum with a fumble recovery on a trick play late in the first half. 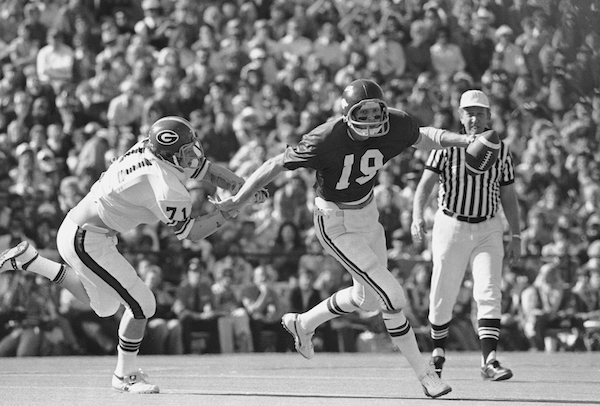 Arkansas quarterback Scott Bull (19) breaks away from the outstretched arms of Georgia tackle Brad Thompson (71) and makes a 4-yard gain in the first quarter of the Cotton Bowl game in Dallas on Jan. 1, 1976. (AP Photo)

The Hogs did not dominate with offense against A&M in ‘75. The defense swarmed the Aggies' wishbone, allowing 149 total yards. There was not much Arkansas offense, either, but there were key passes to Teddy Barnes and Doug Yoder.

The Aggies completed just one pass.A&M stopped most of the veer plays. Mostly the Aggies made Bull keep the ball on the option. He carried 20 times for 47 yards.“I didn’t finish with a big number, but I do remember running over their linebackers right and left,” Bull said. “I never claimed to be a passer!”The rest of the year what Bull did was run the veer option to near perfection behind a great offensive line. Four of the five starters played in the NFL. The running game was prolific.“(Offensive guard) Leotis Harris didn’t start, but he would play in the NFL, too,” Bull said.That line had tackles Gerald Skinner and Greg Koch, guards R.C. Thielemann and Russ Tribble, and center Richard LaFargue.“That line had played a lot of football,” Bull said, noting the Hogs rarely lost the line of scrimmage in 1975.“I will argue with about anyone that the ’75 O-line was the best in our (school) history.“The 1975 offense set a school record with 3,523 rushing yards, eventually passed by the 2007 team with Darren McFadden and Felix Jones, which rushed for 3,725.The 2021 Razorbacks made 2,961 but were much more balanced. They averaged 5.04 per rush, seventh in program history.Offensive coordinator Kendal Briles, who also coached quarterbacks for the ’21 Hogs, maintained amazing balance with his distribution. But consider these rushing game numbers (carries, yards, average) for the season:• Jefferson 146-664-4.5• Smith 119-598-5.0• Sanders 114-578-5.1• Johnson 97-575-5.9• Green 47-227-4.8• Hornsby 24-136-5.7• Burks 14-112-8.0The numbers from 1975 are more amazing. That was in time the Southwest Conference was good. There were injuries (Forte had turf toe and Eckwood had a knee strain) that probably kept the top two backs from going over 1,000 yards. Here were the numbers (carries-yards-average):• Forte 174-983-5.6• Eckwood 104-792-7.6• Fuchs 122-618-5.0• Bull 117-533-4.5• Forrest 47-224-4.7• Cowins 44-210-4.8• Kirkland 28-165-5.8• Calcagni 12-48-4.0The veer was a much different animal than the spread used by Briles. Bull was under center; Jefferson in the shotgun.“Our formation was always the same,” Bull said. “And while we are both running the option, it was much different.“KJ is in the backfield with his reads. My goal was to lead the fullback dive right or left across the line of scrimmage. The idea was to take the ball across the line before the read. We had almost a yard during the mesh.”Bull would ride the back as he made the read.“It was inside the (defensive) tackle,” he said. “If the tackle stepped forward (to the back), I pulled it. If he stepped forward, there was no way he could play me.“Then, I’d go toward the inside leg of the end. You did not go across his face. If he took me, I’d deal it (to the pitch back).“The wide receiver blocked the defensive back. The safety had to make the tackle. If he comes to me, he’s not going to get to the running back.“I’ve watched KJ and I’m not sure who he’s reading all of the time. He’s sitting in that shotgun and the mesh is deep in the backfield. He makes the right decision a great deal of the time.”The backs on the 2021 team are bigger and maybe faster than the 1975 group, but that’s just because of the weight training available in this era.“These backs today are chiseled,” Bull said. “I mean, really cut. That’s because they spend so much time with the strength coaches and nutritionists. We just didn’t have that in my time.“But it works both ways. The players are bigger on defense today. They must be bigger in the backfield.“I see AJ as an Olympic sprinter. Rocket is not slow. When I watch Dominique, I see — now not quite yet — as being like Derrick Henry. He has to continue to develop, but he’s amazing. He may get to Henry’s level eventually.”Bull loves talking about his backfield teammates.“They could do about anything,” he said. “They threw 20 halfback passes. The safeties were in a bind. They had to play run.”So if Bull pitched it quickly, the halfback pass was usually open.“We threw one pass every 15 plays,” Bull said. “But with our offensive line and backs, we didn’t need to pass.“Ike ran over people. He got the tough yards. What I saw him do so many times when we ran around the end, he’d just stop and push defenders past him, then turn it on.“Jerry was just beautiful to watch. I loved to watch him run the dive. He had the same kind of speed our backs have now. He was a slasher. He’d break through that first wave, then he could make a move in the secondary, just so smooth.“If they hadn’t gotten hurt, they both would have had numbers like Darren McFadden and Felix Jones and some of the others would not have played much. It was fun for me.”And it’s fun now for Bull to watch these Razorbacks, including Jefferson.

“People questioned his accuracy to start the year, but I thought he was very accurate," Bull said. "He kept the defense honest with his passing.”That wasn’t Bull’s strength, but he did play three years with the San Francisco 49ers. He was drafted in the sixth round, behind teammates Forte and Kirkland.Ask the Texas A&M defense if Bull was accurate enough. He sure found Barnes with a great throw in a tight window against double coverage in the back of the end zone at War Memorial Stadium.That’s the signature play for the 1975 team. Barnes became "The Immortal Teddy Barnes."

That running game didn’t have a nickname, but it lives on, too.