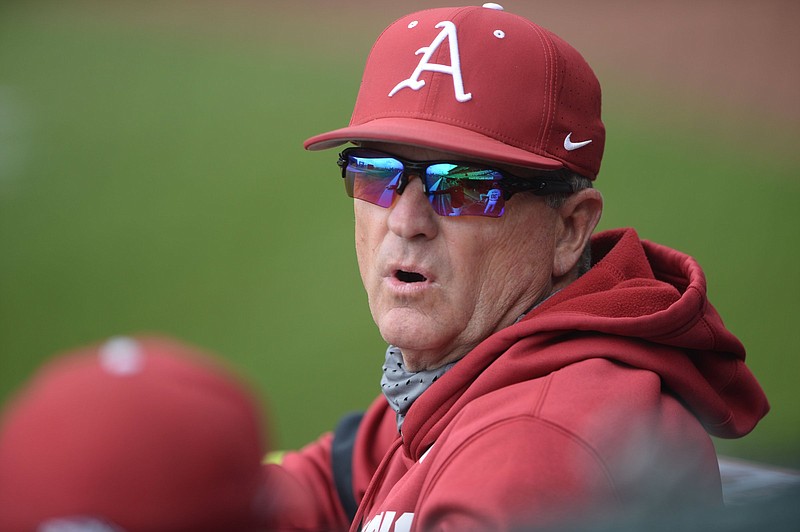 Arkansas Coach Dave Van Horn signed an agreement last week that will raise his salary to $1.25 million and extend his contract through 2026 with automatic 1-year rollovers each season that would take him through 2031. (NWA Democrat-Gazette/Andy Shupe)

FAYETTEVILLE — Arkansas is No. 4 in the preseason USA Today Baseball Coaches Poll, which was released Thursday.

The Razorbacks, who received four of 31 first-place votes in the poll, are ranked behind No. 1 Texas, No. 2 Vanderbilt and No. 3 Mississippi State. Stanford is ranked No. 5.

Arkansas’ schedule includes 16 games against teams ranked in the poll, including 12 games at Baum-Walker Stadium in Fayetteville. The Razorbacks are scheduled to host Vanderbilt, Mississippi State, Ole Miss (6) and LSU (7) this season, and will play at No. 10 Florida.

Stanford and Arkansas are scheduled to play at the Round Rock Classic on Feb. 26 in Round Rock, Texas.

The SEC leads all conferences with eight teams ranked in the poll. Tennessee is ranked 16th and Georgia is 17th.

The No. 4 ranking is Arkansas’ highest in the preseason coaches poll since 2013, when the Razorbacks began the season No. 1.

Arkansas has been ranked in the top 12 of the preseason coaches poll for the past five seasons. The Razorbacks have been ranked in 62 consecutive poll updates dating to 2017, and spent most of last season ranked No. 1.

The coaches poll is the ranking of record used by the Arkansas Democrat-Gazette. The Razorbacks are ranked between No. 2 and No. 20 in five other prominent national polls this preseason.

The Razorbacks are scheduled to open the season with a three-game series against Illinois State beginning Feb. 18 in Fayetteville.