Hope never too far away 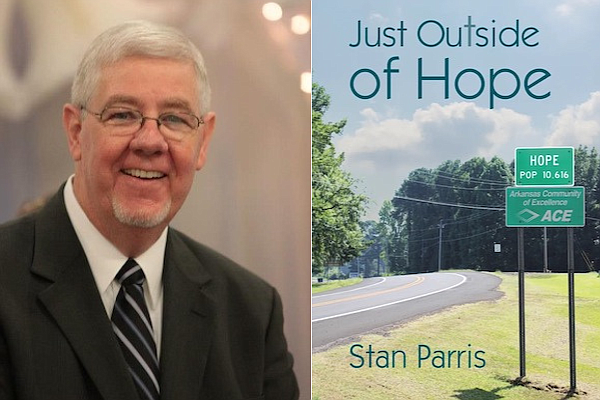 Stan Parris (left) is shown with the cover of his book, "Just Outside of Hope."

Dennis Byrd asked for my address two weeks ago. Expect a “gift,” said my old friend from my days with Stephens Media.

It took about one week for it to arrive. To my delight, I had something great to read after finishing the two fly-fishing books my wife stuck in my Christmas stocking.

“Just Outside of Hope” is a great book. It will soon be in its third printing.

I fly through fly-fishing books because it’s my passion. But this book hit in my heart and was a perfect reboot. Fly fishing is not my religion, although I do pray on the river. I need true church time, too. I worship at Christ Community Church in Mountain Home.

Byrd was given the honor of editing the book I finished this week, fascinating stories from the mission fields by Stan Parris, a retired pastor from Second Baptist Church in Arkadelphia. Those who followed small college football in our state in the 1960s will remember him as an All-America free safety at Henderson State.

That — along with Byrd’s foreword — was enough for me to dive into the book, a wonderful collection of honest-to-God miracles. Yes, there are still miracles happening, probably some right under your own eyes, but more likely in the third-world countries Parris and his wife, Charlotte, visited.

This was all appropriate Wednesday, a national signing day when Arkansas coach Sam Pittman did not sign one player.

This hit me square in the eyes when it dawned on me that just like the main characters in chapter after chapter, Arkansas is no longer “Just Outside of Hope.” After Pittman, a solid Christian coach, led the Hogs out of the wilderness with a 9-4 season, there is hope.

I have always thought the Arkansas program could flourish in the SEC, but I confess that my football faith was tested by the John L. Smith debacle, the end of the Bret Bielema time and the free fall into the abyss with Chad Morris.

Pittman signed a good class in December, with noteworthy additions in the offensive line, linebacker, running back and tight end. There is also great “hope” with some portal transfers, especially at defensive end/outside linebacker with Landon Jackson (LSU) and Drew Sanders (Alabama).

If there is one area where I’ve got real hope in recruiting is the work of Dowell Loggains, the tight ends coach with two signees and three commitments for next year. All are 5-star or 4-star recruits.

I’ve said this for a long time: you can recruit great players at Arkansas. There has always been the ability to bring championships to the Ozarks. How many have been won in other sports? SEC commissioner Greg Sankey has been handing trophies to Arkansas coaches more than any other school of late.

This takes me back to Parris, who grew up just outside of Hope in Southwest Arkansas. He brought the goods with his writing. I loved the way he described his fling in the NFL as an undrafted free agent, his only goal growing up as a Hope Bobcat.

Parris had “made the team” in training camp, surviving after signing with the Buffalo Bills in 1971. But his “hopes” came crashing down when he stepped into a hole created by a sprinkler head and sprained a knee while walking off the practice field. He was done just a few days short of the season opener. He had never been hurt one time while playing for the Henderson State Reddies.

That was the start of a brief coaching career. After a stop in Texas, he returned to Hope High School. God began to steer him gently toward ministry work when players begged for a Fellowship of Christian Athletes chapter to be formed.

Parris wrote that there was a “dilemma” because no coach would step forward to sponsor it. Six coaches drew straws. Parris “had to do it” when he drew the short one. Like stepping in the sprinkler hole, his life was changed again.

From FCA sponsor, to seminary, to a couple of pastorates, to the mission field, and now as an author of a great book on his life, Parris has done it all in grand fashion. It’s marvelous writing. I love to tell stories, but I guess his gifts shine better. I’m sure he has God as his co-author.

I was fascinated at his spur of the moment explanation to a business leader in Hope about why First Baptist Church has a weather vane atop the steeple and not a cross.

Parris told him, “It’s to remind our community that no matter which way the wind is blowing, God is still God and there is always hope.” Parris wrote that he didn’t know why the church was built that way, but he’s comfortable with that explanation.

I visited by phone with Parris to make sure it was OK to write a review. Parris revealed that among his many great surprises were the calls from a great number of his teammates with the Reddies. They loved his work. Those had to be wonderful conversations. Many he had not heard from since college days.

Some of the stories in the book take place in Costa Rica, Venezuela, Brazil, Turkey, China, Pakistan and some unnamed island nations. There are prison visits, brushes with the Taliban and Muslim leaders. The 137 pages will fly through your fingers.

There is a chapter on witchcraft and another on negotiations with Muslim governments to deliver food in impoverished areas, knowing that eventually Christianity would shine through.

Great work, Stan Parris, although I’m not talking altogether about the writing. Surely there is another book to be written. This book came free, but I’ll buy the next one.

“Just Outside of Hope” is available online from Pard Publishing (pardpublishing.com), an enterprise formed by Parris and Byrd to get the book in print and to become a vehicle for publishing future books.