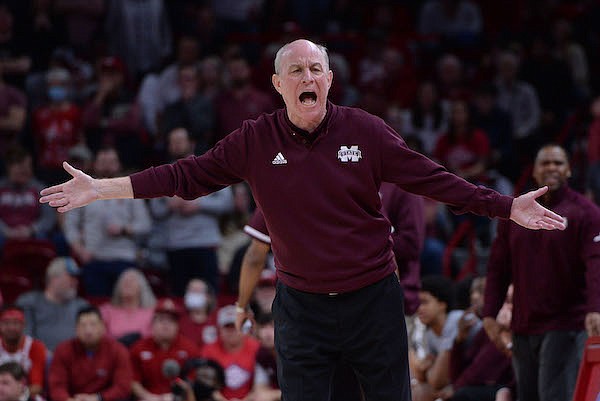 Mississippi State coach Ben Howland is shown during a game against Arkansas on Saturday, Feb. 5, 2022, in Fayetteville.

FAYETTEVILLE — Count Mississippi State coach Ben Howland among those on the Muss Buss.

“I thought the difference was they were so much better now than the first time we played them. Especially their defense, they are so much bigger and strong because they are playing all those older seniors that have a lot of experience. And they  are very physical.”

More from WholeHogSports: Full coverage from Arkansas' win over MSU

Arkansas hit just 1 of 13 three-pointers in the first half and was just 2 of 17 before Jaylin Williams and Chris Lykes hit a pair of threes in the final two minutes.

Those came during a 9-1 Arkansas run after the Bulldogs pulled to within 53-52 on Garrison Brooks’ dunk with 2:07 left.

“It was disappointing for our players because we let another one slip way,” Howland said. “We had a great comeback to fight our way back and not get the job done on a Quad 1 opportunity here at Fayetteville.”

The teams were tied at 25-25 at halftime while combining for 16 of 53 on first-half shot attempts.

Arkansas took a 53-44 advantage with 6:03 remaining, but Mississippi State crept back.

“I think they defended really well tonight,” said Brooks, a transfer from North Carolina. “That was their game plan and that is what they hang their hat on. They came out and defended pretty well against us today.”

Mississippi State fell to 0-5 on the road this season. Arkansas improved to 13-1 at home.

Brooks said Arkansas made the plays needed on both ends late.

"They just made bigger plays down the stretch than we did," Brooks said.

Howland liked most of his team's box score numbers except field goal shooting. The Bulldogs made 18 of 51, compared to Arkansas 23 of 61.

“To win on the road, they had six turnovers and we had 12, so that was really the stat,” Howland said. “The biggest difference in the game was that they had more possessions. They (out-rebounded) us by one, they had five more baskets than we did. We did a better job of making our fouls shots percentage-wise than they did.”

Williams, who also had two blocks and one steal late, fought through foul trouble while being matched up with Mississippi State 6-11 center Tolu Smith.

Smith had 18 points and 11 rebounds in the earlier matchup, but was held to 11 points and 6 rebounds Saturday.