Pearl: 'We have a price on our head' 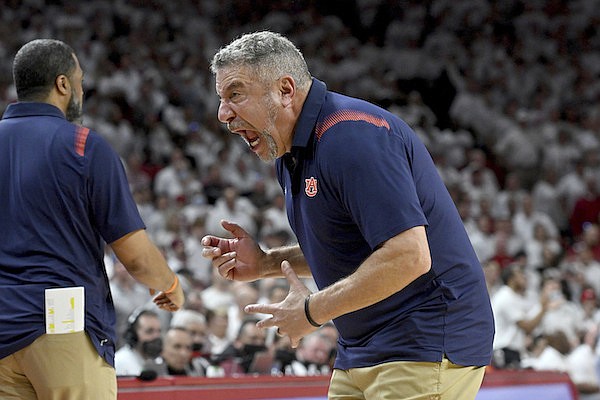 Auburn coach Bruce Pearl reacts after a charging fouled was called in favor of Arkansas during overtime in an NCAA college basketball game Tuesday, Feb. 8, 2022, in Fayetteville. (AP Photo/Michael Woods)

FAYETTEVILLE — No. 1 Auburn had not lost since before Thanksgiving and unranked Arkansas had never taken down a top-ranked basketball team in Bud Walton Arena.

Both things are no longer true after Tuesday night when the Razorbacks downed the Tigers 80-76 in overtime before a record arena crowd of 20,327.

More from WholeHogSports: Full coverage from Arkansas' win over Auburn

“I was proud to be No. 1 and we had not lost since sometime in November,” Pearl said. “We have a price on our head. It is very difficult on the road. And congratulations to Arkansas. It’s just hard for me to believe we were the first No. 1 team to come in here since they have been in the SEC.”

During pregame, Auburn’s players danced on the Razorback logo at midcourt, but post game Arkansas’ fans stormed the court.

A video of dancing was shown to Arkansas players before the game, Arkansas coach Eric Musselman said.

The win cut Auburn’s SEC lead over Kentucky to one game with Arkansas and Tennessee both two games back.

"Yep, a lot of good teams in our league,” Pearl said. “We know we don’t have much margin for error. I don’t see Kentucky losing much. So we know the position that we’re in. We worked really hard to put ourselves in this position.”

Auburn guard Wendell Green, who missed a three-pointer at the end of regulation that would have won the game for the Tigers, had an interesting take after the game.

“It’s great,” Green said. “I kind of forgot and felt what it was like to lose. We had not lost in 20 games I think, something like that. We needed this and are just going to stay together. We are just going to think about what we have control over.”

Pearl’s team last loss was 115-109 to Connecticut in double overtime on Nov. 24 at the Battle for Atlantis in the Bahamas.

Auburn lost despite a monster game from 7-1 North Carolina transfer Walker Kessler, who was close to a triple-double before fouling out in overtime.

Jabari Smith added 20 points and 9 rebounds, and Green had 19 points but 7 of his team’s 19 turnovers.

“Obviously Jabari made some big shots,” Pearl said. “Wendell was a tough cover, but he turned it over too much.

“Arkansas did a good job turning us over and got (24) points off of those turnovers. They disrupted us a little bit and we turned the basketball over too much.”

Green accepted the blame for his miscues.

“It is just unacceptable for me to have that many turnovers, especially on the road,” Green said. “They messed with us a little bit in the paint with the bigs just standing there, undercutting me. For me personally, I just can’t turn the ball over like that.”

Having three players score all but 21 of its points was not good for Auburn, according to Pearl.

“For us, it is always the sum of our parts when we play well and we don’t, which has been the last two games,” Pearl said. “We don’t need 1 or 2 or 3 guys to carry us and that is what it looked like tonight. So we need more balance and for one reason or another, it did not happen.”

Green felt confident in his late shot despite being just 1 of 6 from three-point range to that point.

Arkansas jumped out to a 27-15 lead in the first half on Chris Lykes’ two free throws at the 4:13 mark, but Green’s bucket right before halftime cut that deficit to 28-25 and Smith’s old-fashioned three-point play tied it barely into the second half.

“The atmosphere, they had a great home-court advantage,” Green said. “ I thought we did a good job of settling that down throughout the game."

Green was asked what the locker room was like afterward.

“Before (Pearl) got in there we were just saying that we went out there and played hard,” Green said. “We try to not let guys beat themselves up. That is what a lot of guys do. We are still 22-2."