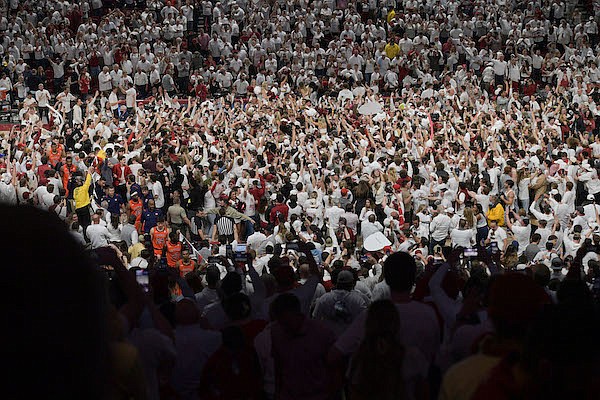 FAYETTEVILLE — The on-court party after the Arkansas Razorbacks’ 80-76 overtime upset of No. 1 Auburn on Tuesday came with a hefty price tag.

The Southeastern Conference announced Wednesday the University of Arkansas athletic department has been fined $250,000 for the court storming after the final buzzer at Bud Walton Arena.

Mostly students, many of them clad in white as part of the school’s “White Out” initiative, rushed the floor immediately after the buzzer as guard Davonte Davis fed himself a high bounce and dunk that came just following the horn.

Arkansas players and members of the staff participated in an on-court rave for several minutes. The festivities lasted long enough that Auburn Coach Bruce Pearl did not return court-side to conduct his post-game interview with the Auburn Radio Network.

The fine for the Razorbacks is a third offense under the SEC’s “access to competition area” policies that were updated in 2015.

Arkansas Athletic Director Hunter Yurachek declined a request for comment from the Arkansas Democrat-Gazette regarding the court rush and the fine.

Yurachek posted side-by-side pictures of the aftermath of the basketball game vs. Auburn and the football game against Texas on his Twitter account on Wednesday morning. Yurachek wrote “Priceless!” with the hashtag “WinAsOneRazorback” to accompany the post.

Arkansas coach Eric Musselman, who is sporting a shoulder harness to protect himself after left rotator cuff surgery, said there was a plan to keep him out of the raucous celebration to avoid potential re-injury.

“We had talked about it earlier today then when we won I’ve got to get out of here as quickly as possible,” Musselman said on his postgame video conference. “I went back in the back.”

Musselman did return to the court after things had calmed down a bit, minus his polo.

“I had some students ask me earlier today if I would take my shirt off if we won,” he said. “So I got back there and took my shirt off. Both officers did an incredible job of letting me come back out and celebrate quick with the students. Just so proud of our team because Auburn is a really, really good basketball team and obviously one of the best teams in the entire country.”

Fines levied against SEC schools due to the access to competition policy are deposited into the SEC Post-Graduate Scholarship Fund.