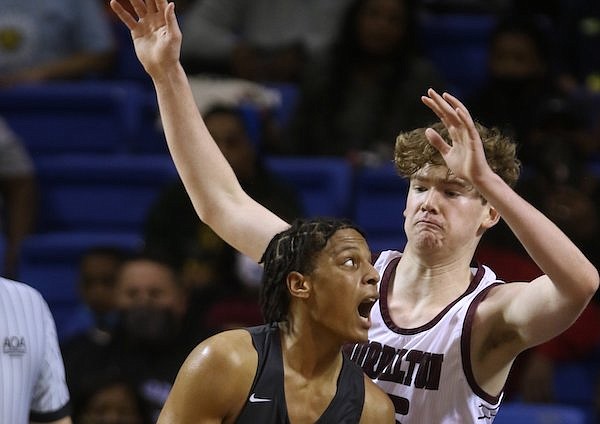 Mills' Javion Guy-King (0) goes up for a shot while defended by Morrilton's Henry Cowles (15) during the second quarter of Mills' 49-46 in the Class 4A boys state championship game on Saturday, March 10, 2021, at Bank OZK Arena in Hot Springs.

Former Morrilton hoops standout and recent Arkansas recruiting interest Henry Cowles (6-11, 230) returned to his Scotland (Pa.) Campus Sports prep school on Monday with the intention of having a big couple of months dictate his future.

Cowles, who was on hand Saturday night at Bud Walton Arena for the Razorbacks’ 63-55 win over Mississippi State, played three games for the school in Chambersburg, Pa., in November before suffering an injury that has just recently healed.

“I tore my labrum in my left shoulder and so I have been at home doing PT (physical therapy),” Cowles said. “I have been blessed with not needing surgery. I am looking forward to going back to playing this week.”

Cowles has offers from Tulsa, Oral Roberts, Loyola-Chicago, New Mexico State and Southern Arkansas along with interest from Arkansas, South Carolina, Iona and Liberty. All have contacted him in the last couple of weeks.

“It’s been a little quiet since the shoulder injury, but about a week ago I began to work out again with my trainer John Parker and getting film out there and it’s starting to kind of heat up again,” Cowles said.

Arkansas (19-5 overall, 8-3 SEC) is currently riding a nine-game winning streak under third-year head coach Eric Musselman after an 80-76 win over No. 1 Auburn (22-2, 10-1) on Tuesday night. The Hogs are one of those teams that has Cowles excited.

“I have been a Hog fan all my life and it’s an amazing coaching staff that they have at Arkansas now and it is an amazing atmosphere,” Cowles said. “That would be amazing, playing for a great coach like Coach Musselman and playing at Arkansas.”

Cowles was able to watch the Razorbacks’ win over Auburn on television.

“It was very impressive seeing them knock off the number one team in the nation,” Cowles said. “(JD) Notae had a great game and so did Jaylin Williams with his last second lay up to tie them up.

“It was just a great team win for them especially after watching Auburn dance on their logo before the game.”

Arkansas started the SEC season 0-3 before ripping off the nine wins, including a non-conference victory over West Virginia in the SEC/Big 12 Challenge.

“It’s also great to see them bounce back in league play,” Cowles said. “Can’t wait to see what they do in the future this season.”

Cowles and Arkansas basketball signee Joseph Pinion (6-6, 180) were juniors last season as Morrilton made it to the Class 4A state title game before losing to Little Rock Mills 48-45.

“It was a very tough decision,” Cowles said of his decision to leave Morrilton and head to a prep school. “Joseph is a great guy, a great teammate on and off the floor and he supported me with my decision and said ‘just do what is best for you.’ That helped me out a lot although it was hard for me leaving everybody.”

Parker was key in getting Cowles to Scotland, whose head coach is former Laurinberg (NC) Prep program boss Chris Chaney, who has won three national championships.

“My personal basketball trainer used to play for Chris Chaney, who is head coach at Scotland and kind of told me about them and they started recruiting me to play for them,” Cowles said. “I really made the decision because I wanted to develop really fast.

“The best way to do that was playing against D-I bodies and players all the time, practicing with them and getting that experience against a bunch of big guys.”

“I have definitely hit a growth spurt,” Cowles said. “I have even grown a half inch since November. I am now up to 230.”

Even with the injury, Cowles believes that his practicing against his Scotland teammates since last summer and the personal training has helped him develop.

“I have definitely improved my inside game and my pick and pop,” Cowles said. “..My goal is just getting back out there and getting into game shape, which is totally different than just working out. I want to show all these coaches what kind of player I can be, how I have grown and getting back to improving.”