No. 9 Razorbacks open season in Mexico 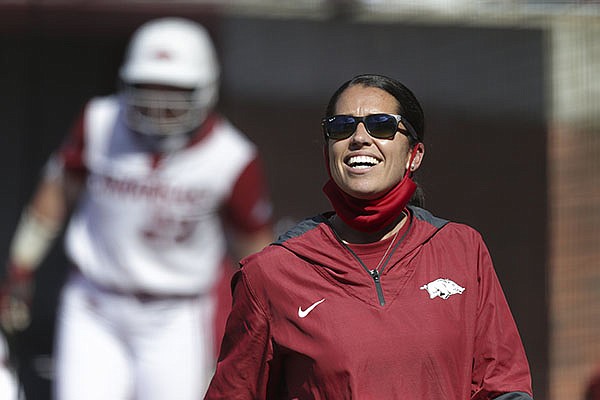 Arkansas first baseman Danielle Gibson said the team has been driven the entire offseason by the feeling of having their season end a round short of the Women’s College World Series a year ago.

The Razorbacks softball team put together the best season in program history, winning a share of the Southeastern Conference regular-season title and hosting a super regional for the first time last season. But Arizona knocked off Arkansas twice in Bogle Park to advance to Oklahoma City.

Players said over and over the goal for this season is to make it to Women’s College World Series.

“We don’t want to have any gas left in the tank. It’s a horrible feeling to know that you still had more in you and it feels like you let the team down. It feels like your team let the university down and the state down because of Arkansas. But we remember it.”

The Razorbacks have a group that’s even more talented and deeper than last year, Arkansas coach Courtney Deifel said. They are ranked No. 9 in the preseason ESPN.com/USA Softball poll and picked to finish third in the SEC in the preseason coaches poll.

In the SEC, Arkansas is picked behind Alabama and Florida, which are both ranked ahead of the Razorbacks in the national poll.

“I feel like this team is seasoned,” Deifel said. “We have a chunk of our returners that have really good experience and an equal amount of hunger to push past where we’ve been and we’ve added very experienced transfers.

“They approach the game each day in almost a professional manner, very business-like. I just think it’s a different level of maturity across the board.”

That starts with a quartet of fifth-year seniors led by Gibson and pitcher Mary Haff, who were both selected to preseason All-America teams. The Razorbacks return four starters from the lineup in the super regional. Hannah McEwen returns in left field, while sophomore Hannah Gammill of Beebe will again play third.

They have added four transfers, who will all play significant roles.

Taylor Ellsworth, a grad transfer from Texas, will start behind the plate, while K.B. Sides, who was named to the SEC All-Defensive team last year while playing for Alabama, will patrol center field.

Pitchers Callie Turner (Tennessee) and Chenise Delce (Tulsa) are also transfers who will help supplement the pitching staff along with returners Jenna Bloom, a member of the SEC All-Newcomer team a year ago, and Lauren Howell.

Freshman Spencer Prigge will start at shortstop and fill the spot vacated by All-America slugger Braxton Burnside, while Audrie LaVallie will get the nod at second. However, Deifel said freshmen Raigan Kramer and Ally Sockey of Greenwood will also see time there, too.

Fifth-year senior Linnie Malkin, who hit 18 homers a year ago occupying the designated player spot, will start in right field and Rylin Hedgecock, who saw some at-bats off the bench last season, will be the DP.

Freshman Kacie Hoffman is also in mix, but is currently sidelined with an undisclosed injury. Deifel said she’s unsure of a time table on her return.

Sam Torres, a redshirt junior who came through big at times a year ago, and sophomore Cally Kildow of Gravette will also play some in right field. Redshirt junior Larissa Cesena, who was valuable as a late-inning defensive replacement in the outfield last season, is also injured. She is not close to returning to action, Deifel said.

The Razorbacks will open the season in a warmer climate. They will take part in the Puerto Vallarta (Mexico) College Challenge and kick off the season against Rutgers this morning in what Deifel said will be the first game of the Division-I college softball season. First pitch is scheduled for 10 a.m.

Arkansas will play five games in three days in Mexico, highlighted by two against No. 7 Washington. The games will be available on the FloSports streaming platform.

Deifel acknowledged on a Zoom call Monday that every player had made it through the last round of covid-19 testing and would make the trip unless someone started showing symptoms. Arkansas also played in the event in 2019, so several players are making a return trip. Deifel’s excited for the trip and to share the experience with her players.

“It’s such a really cool experience throughout this whole trip because it just exposes our players to another culture and something they wouldn’t necessarily do on their own … I just think that’s the piece that to me is why you do it,” Deifel said.

The Razorbacks’ home opener is Feb. 17 against No. 25 Wichita State. First pitch for that game is slated for 5 p.m.