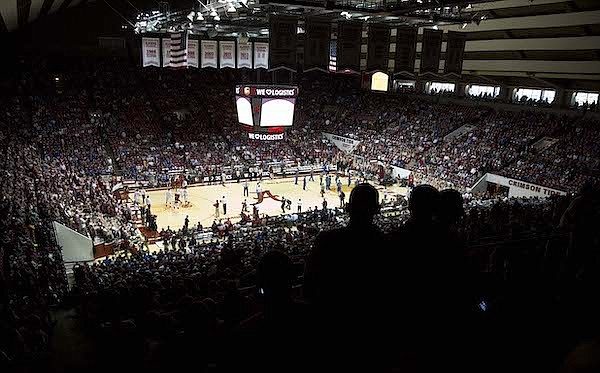 Coleman Coliseum is shown during a game between Alabama and Kentucky on Saturday, Jan. 17, 2015, in Tuscaloosa, Ala. (AP Photo/Brynn Anderson)

TUSCALOOSA, Ala. — University of Alabama trustees approved a plan last week to construct a new basketball and gymnastics arena that would replace 54-year-old Coleman Coliseum at a cost of $183 million.

The new facility would seat about 10,130 people, or roughly 4,300 less than Coleman, which would become a practice site.

It would have 60% of the seats in the lower bowl, with student seating stretching around most of it and house men's and women's basketball and gymnastics.

“Our fan support and student section has been incredible, and we are excited about the possibility of bringing them even closer to the action," Alabama men's basketball coach Nate Oats said in a statement. “I’ve said multiple times how having that support really makes a huge difference in the home-court advantage, and this would certainly make for an outstanding game-day atmosphere for our team and our fans."

The project, which would also include a practice facility for the university's golf teams, is part of an overall, $600 million plan to improve athletics facilities over a decade.

More than $470 million already has been raised, and athletics director Greg Byrne said that work would continue.

"We’ll be starting to talk more directly with architects and get further ideas and designs put together on what it can look like to hopefully, eventually, get a shovel in the ground on this,” Byrne said.

Originally opened in 1968, Coleman Coliseum was built at a cost of $4.2 million. A proposal submitted to trustees by athletics said extensive renovations to Coleman would have cost about $150 million.

Plans indicated the university could seek bids for the project in April 2023.