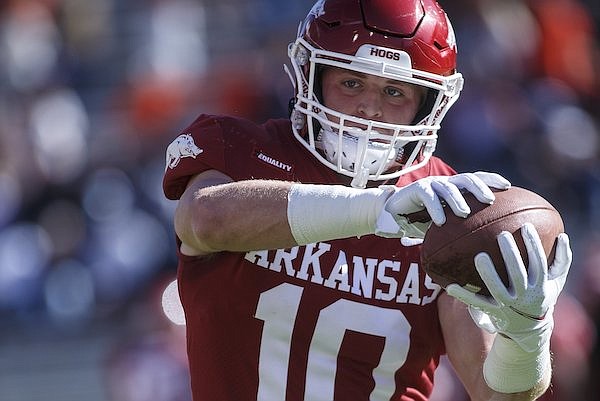 Arkansas linebacker Bumper Pool goes through warmups prior to a game against Auburn on Saturday, Oct. 16, 2021, in Fayetteville.

The focus will be on rebuilding the defense when the Arkansas football team begins spring practice March 13. The starting unit from the 24-10 victory over Penn State will be missing seven starters.

That sounds problematic until you consider that linebacker Bumper Pool and safety Jalen Catalon were not starters and will be front and center to lead the 2022 defense.

Pool led the team in tackles with 125 despite starting only the season opener. He’ll return for a second senior season, just as linebackers Grant Morgan and Hayden Henry did last year when they were the primary starters.

Henry and Morgan both had 101 tackles last year. Henry was not able to play the first half of the season opener. He sat out those two quarters after being ejected for targeting in the final game of the 2020 season.

Catalon started the first six games and had 46 tackles despite battling multiple injuries. He underwent shoulder surgery after the Ole Miss game in October. He will be a fourth-year junior this season.

Both Pool and Catalon considered a try at the NFL Draft over the winter break, but announced they would return. They are likely to be the two defensive captains. No one disputes their leadership skills.

It was Pool who gathered the team on the field for a fiery speech just before the start of the second half in the regular-season finale against Missouri. He had done that at other times, too, but never in front of the fans. The Hogs played wonderfully in the second half.

Pool knows his role will include plenty of that this season. He knows Catalon has his back and that’s in a double meaning.

“Jalen is comfortable leading the back end,” Pool said. “He will play a leading role for this team.

“I will continue to lead the front seven. We’ve got some others who will lead, too.

“I think we’ve seen Jalen take that next step in leadership in (offseason) workouts. He’s been fantastic.”

Catalon was on several preseason all-star teams, but he sustained a shoulder injury early in August practice that deteriorated as the season progressed. He suffered a broken wrist against Texas A&M, too.

Everyone recalls the Catalon of 2020 when he made 99 tackles to finish third behind Morgan and Pool. Catalon’s 51 solo stops were tops on the team. Pool said the Hogs are getting back a much better Catalon.

“We are not just getting him back, we are getting a completely revised version than even the one from two years ago,” Pool said. “He’s so hungry. He has a lot to prove. He’s 100% better.”

It’s that drive to prove himself that has Pool on the verge of becoming the school’s all-time tackle leader. He needs 59 to catch Tony Bua atop the charts at 408.

Pool doesn’t look at those totals. It’s not that he doesn’t want to make a lot of tackles, it’s that he knows getting defensive stops and forcing punts is what wins on the scoreboard, the ultimate goal.

“At the end of the day, getting a lot of tackles doesn’t mean you win games,” he said. “I do know that I need production for our team to do well.

“But I don’t compare what I do to someone else. More is good and you do feel better.”

Piling up tackle numbers was good last year. As the backup, he thought it would prove he deserved his time.

“Not starting was good because it put a chip on my shoulder,” he said. “The only thing I could control was that I was productive when I was out there. So I wanted to make plays and prove value.“

And, there was the benefit of pushing both Henry and Morgan.

“It became normal that I was going to be the backup and then breathe some life into the others when I came in,” he said. “I was playing with a chip on my shoulder and that was good.”

There is little doubt he’ll be a starter with Morgan and Henry departed. He’s helping linebackers coach Michael Scherer, just in his second year as a full-time assistant, in training his running mates for the 2022 defense. It’s a big part of the rebuild.

Alabama transfer Drew Sanders is one of the candidates, along with redshirt freshman Chris “Pooh” Paul. Sanders played mainly at outside linebacker for the Crimson Tide, but he’ll get a shot at an inside spot.

“I think so,” Pool said. “I think Drew is with me. We work out together and push each other. He knows how to work. I think that was a key for us last year, the way Hayden, Grant and I pushed each other.”

Sanders is part of a talented group of portal transfers the Hogs are counting on to refurbish the defense after the loss of linemen John Ridgeway, Markell Utsey and Tre Williams, defensive backs Montaric Brown, Joe Foucha and Greg Brooks, and the two linebackers, Morgan and Henry. All eight started at times.

“But we have so much talent coming in,” Pool said. “Obviously, we lost a bunch, but this is a good group. We just have to reload and build our culture, get these talented guys to understand how we do things.”

“We’ve got good players coming back, too,” Pool said. “Myles Slusher at safety has really stepped up. He’s an exciting player. Simeon Blair is a good player, too. He really studies the game.

“This defense will have its own identity with a lot of new parts. All I can say is that there is some real talent here. We have a size upgrade and more length. You take all of that talent and mold it into a great collective unit.”

Just as Pool thinks it will be an improved Catalon, he’s working hard to build his game, too. That’s one of the reasons he returned for a fifth season. He said Scherer continues to add things to his game.

“Some of the things I’m going to work on this spring are block destruction and pass rush. You just keep putting things in your tool kit. I want to get stronger, too.”

The Hogs were more effective with some blitz packages late in the season.

“We did that as we got more secure with our coverages,” Pool said. “We got more confident as the season progressed.”

Pool credits Scherer with improving the numbers for the linebackers. That three-man rotation produced 327 tackles. They seemed to improve their play in the outside alleys.

“Yes, we did,” Pool said. “We had much more success in the alleys. We could play our gaps and shed blocks and get to the alleys. We were 100% better with our hands. We had raw ability but we didn’t have all the tools. He taught us how to use our hands.

“I think we had some speed, but we learned how to use it better.”

There is talent returning on offense with quarterback KJ Jefferson, most of the backfield stars and four of five starters on the offensive line. Transfer wide receiver Jadon Haselwood (Oklahoma) will help with the loss of Treylon Burks.

The schedule is daunting with nonconference opponents Cincinnati, Liberty, BYU and Missouri State. However, Pool thinks the Hogs have built a winner with coach Sam Pittman.

The Hogs filled their football building with four trophies, the haul from rivalry victories over Texas A&M, LSU and Missouri, and the bowl win over Penn State.

“Our goal wasn’t so much to win trophies,” Pool said. “We just tried to win every game. We were just going game by game. But when we got to the bye, Coach Pittman needed something to flip the switch. He talked to us about the four Bs.

“That was gaining bowl eligibility, then the battle for the Boot trophy, Battle Line Rivalry and ‘Bama. It was all just game by game. I do give a lot of credit to Coach Pittman. He is a great leader of men.

“Our team is still hungry. We have been through some incredible lows and now some special highs. We are excited, just like people around campus and the state.

“We just have to stay locked in. People in our state are excited. I know that. We are the pro team for Arkansas, the only team. We have to continue to win and keep them excited.”

Pool is getting some of the fruits of that excitement. Among his Name, Image and Likeness deals is a new sponsorship package from Stephens, Inc.

“I know that Stephens has always been a big supporter,” Pool said. “I have the same feelings. I love this state. They have shown that, too.

“I’ve gotten an opportunity to introduce myself (at Stephens) and it’s exciting to be a part of that sponsorship.”

Pool has goals of playing in the NFL, but football will stop someday.

“My degree is in business management,” he said. “One of the important things about NIL is to build your relationships, make connections and fill up your Rolodex.”

There will be no Red-White Game this spring. Instead, there will be an open practice at 11 a.m. on Saturday, April 16. Pool doesn’t know how much he’ll be in contact for the spring, but hopes it’s plenty.

“I love to play the game,” he said. “The only way I know to get better is to be in everything. Obviously, there may be some things where I sit back, but I want to show the young guys how we play.”