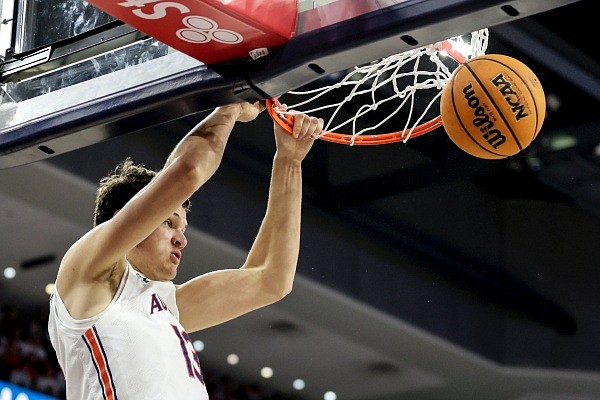 Auburn forward Walker Kessler (13) dunks the ball during the second half of an NCAA college basketball game against Texas A&M Saturday, Feb. 12, 2022, in Auburn, Ala. (AP Photo/Butch Dill)

FAYETTEVILLE — The battle for the double byes at the SEC Tournament has produced a clear-cut gap between the top four teams in Auburn, Kentucky, Tennessee and Arkansas, who all have six games remaining, and four clubs with six losses in Alabama, LSU, Florida and Mississippi State, who will be trying to break into that top four

The toughest finish for those four teams belongs to the Razorbacks, who just missed a shot at notching a Quad 1 win in Saturday’s 68-67 loss at Alabama.

Arkansas will face teams with a combined 44-27 SEC record (.620) in its remaining games, including a home and away series with Tennessee.

The Volunteers have the next-toughest remaining schedule, with its opponents at 42-29 (.592) in league play.

Kentucky also faces six remaining games against opponents with a winning league record at 38-34 (.528), but Auburn’s remaining games come against teams who are a combined 33-38 (.465) in the SEC.

The combined records of opponents for those teams can vary by a game because Mississippi State and Missouri have only played 11 SEC games and have a makeup game coming on Sunday.

Auburn, Kentucky, Tennessee and Arkansas are all projected into the NCAA Tournament field by the leading analysts, as are Alabama and LSU.

CBSSports.com’s Jerry Palm’s latest bracketology lists seven SEC teams in his field, including Florida as a 12 seed among his last four in.

The other SEC teams in his projection: 1 seeds Auburn and Kentucky, 4 seed Tennessee, 6 seeds Alabama and LSU, and 7 seed Arkansas.

ESPN.com’s Joe Lunardi had a Friday projection with Gonzaga as the overall No. 1 and Florida listed as the first team out with Mississippi State among his “next four out.”

The race for player of the year in the SEC is likely to feature split voting by both media and coaches among a variety of candidates.

The top player on SEC-leading Auburn, the team that spent two weeks atop The Associated Press Top 25, is up for debate between freshman Jabari Smith and transfers Wendell Green Jr. and Walker Kessler.

The SEC’s scoring king will have to be under consideration, and that player has ping-ponged between Arkansas guard JD Notae and Vanderbilt guard Scotty Pippen Jr. throughout the season.

Kentucky’s Oscar Tshiebwe might have the edge on everybody. The West Virginia transfer is a double-double machine who leads the nation with 15.3 rebounds per game, ranks sixth in the SEC with 16.3 points per game and leads the league with 60.2% field goal shooting. Tshiebwe has 19 double-doubles this season and 31 in his career.

Molinar has taken over the scoring lead in conference-only games at 20.6 points per game, fractionally ahead of Notae (20.1) and Pippen (19.8).

Mississippi State and Missouri will play three games in six days and twice in three days due to a scheduling quirk brought on by an earlier postponement.

The teams will meet on Saturday in Starkville, Miss., then play on Sunday in Columbia, Mo., in a game that had been scheduled for Jan. 5 but put off due to covid-19 issues within the Missouri program.

The SEC’s two longest winning streaks were snapped in the course of four days, both involving Arkansas.

The Razorbacks brought Auburn’s Division I-leading 19-game win streak to an end with Tuesday’s 80-76 victory in overtime, which gave the Hogs a nine-game streak.

Alabama put an end to that in Saturday’s 68-67 decision in Tuscaloosa, Ala.

The end of those streaks has left the longest active SEC win streak with Kentucky, which has won six in a row heading into tonight’s game against Tennessee.

Kentucky and Tennessee, which meet tonight in Knoxville, Tenn., have split their season series the last three years and five of the last six years.

Kentucky’s six-game winning streak is currently the longest for any SEC team, but Tennessee has a longer SEC win streak at seven games, dating to the 28-point blowout loss in Rupp Arena. The Volunteers run of league victories over Vanderbilt, LSU, Florida, Texas A&M, South Carolina, Mississippi State and Vandy again sandwiches a 52-51 setback at Texas in the Big 12/SEC Challenge on Jan. 29.

Kentucky has remained on a roll, despite Jacob Toppin sitting out Saturday’s 78-57 win over Florida with an ankle injury, and guard TyTy Washington going out again with a lower left leg injury. Washington is considered day to day.

Kessler recorded his first triple-double this with 16 points, 10 rebounds and 11 blocked shots in a win over LSU.

Kessler is the first SEC player with multiple triple-doubles in the same season since LSU’s Shaquille O’Neal in 1992.

LSU’s Maravich Center, called the PMAC, turned 50 this season after its opening on Jan. 3, 1972, at a cost of $11.5 million. The facility, which now seats 13,215, began as the Assembly Center at its inception, and it was officially renamed the Pete Maravich Assembly Center during the summer of 1988 after the former LSU star, known as “Pistol Pete” died suddenly at age 40 of heart failure in Pasadena, Calif., on Jan. 5.

Kessler and Tshiebwe were co-players of the week. Kessler, a 7-1 sophomore from Newnan, Ga., averaged 14 points, 15 rebounds and 9.5 blocks against Arkansas and Texas A&M and recorded his second triple double of the season against the Aggies. Tshiebwe, a 6-9 junior from the Congo, averaged 22.5 points, 16.5 rebounds, 2.5 steals and 1.5 blocks in wins over South Carolina and Florida.

Davison, a 6-3 guard from Letohatchee, Ala., was the SEC Freshman of the Week after averaging 14.5 points, 7 rebounds and 6 assists in wins over Ole Miss and Arkansas.

This is the rematch of a game won 107-79 by the Wildcats on Jan. 15, the most points surrendered by a Rick Barnes team at Tennessee. The Volunteers have been troublesome for Kentucky since Barnes’ arrival with a record of 7-8 against the Wildcats.

“The way we turned the ball over and allowed them to score, 30-something [32] points off turnovers, you’re not going to win basketball games anywhere doing that.,” — Rick Barnes on Tennessee’s 107-79 loss at Kentucky heading into tonight’s rematch

“An incredible environment. A team that’s good enough to win the national championship. We did do some good things, just not good enough to win today.” Texas A&M Coach Buzz Williams on his team’s eighth-consecutive loss, 75-58 at then-No. 1 Auburn on Saturday

“I am thankful for my teammates. They make it easy to block shots because they’re so good and defend the ball. They know that I can block the shot, so they corral the guard to me.” Auburn’s Walker Kessler after his 12 blocked shots in a triple-double against Texas A&M

1 – Win by Auburn over Texas A&M at Auburn Arena. The Aggies had been 5-0 there prior to Saturday’s 75-58 loss to the Tigers